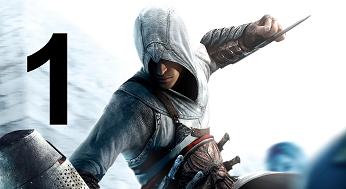 in 2014 I often typed my thoughts as I was playing the game. With a little bit of editing I have cut them into a series of reviews I am calling "Jazz Edition." The first of these is for Assassin's Creed 1 which I played to completion 4 years after beating Assassin's Creed 2. I was always hearing how much better AC2 was then AC1, which is the original reason I skipped it, but when i purchased Revelations (which comes with AC1) I decided to try it for myself...

ing deal is, it's only slightly more repetitive than I remember Assassin's Creed 2 being. The sword combat is still slightly annoying, the hidden spike is still the best way to kill them. I do see that climbing and traveling by rooftop is more puzzle-like and less automated than in future games as you have to look for the bridge to the next rooftop (and sometimes it involves some side-tracking) or the right foothold to climb higher. I appreciate the jumbled mess of it because it feels more like a real city that grew without any kind of central planning then a city strangely built for optimal free-running on rooftops.

It IS annoying that for saying you are supposed to be a master assassin there really aren't that many tools in your bag to be stealthy. The main assassinations basically boil down to "walk up to target, blade in gut, listen to them whine for a couple of minutes, and then run away." If they had taken a more Hitman-like approach to the assassination targets I think that would have helped break up the monotony quite a bit as even later targets guarded in fortresses it basically boils down to avoid / kill the guards along the way, sword or hidden blade the target and then the guards in the area freak out and attack you. On one I tried scaling the wall instead of using the main entrance and then killing all the archers in the parapet and climbing down undetected to get in striking distance with a throwing knife, but knives (which kill everyone else in one hit) don't kill assassination targets. I would have loved to have the option to employ some more difficult agent 47-ish moves to kill them stealthily or make it look like an accident.

To my surprise, in the first game there is an ACTUAL story in the non-Animus (present day) portion of the game, I always wondered why they had those pointless talky-talk sessions out of it in Assassin's Creed 2 since it didn't amount to anything. It's a vestigial tail left over from when it had a function in the original game, like how they kept doing "flashbacks" in Lost until the end because that's how they had always done it even though they had outlived their usefulness several seasons ago. Why is this game bad again? Must get worse in the final 1/3rd of the game I guess?

By the 2/3rds mark of Assassin's Creed, tedium begins to set in, not bad considering this game is 7 years old, it must have held more interest in 2007 before games with more varied gameplay came out. I am still liking the cities quite a bit, the early districts are a suitable, hodge podge mess because they are the poorer districts. You move onto richer districts and there is more open space, more elaborate / distinctive architecture, and more guard checkpoints to figure out how to circumvent.

Guards on the roof are generally only a problem when running away after killing an assassination target as they spoil finding a place to hide on the roof. In normal play rather than raising their alarm, they will draw their bow and try to strike you with an arrow if you don't get off the roof. When their bow is drawn you just have to sprint at them and then press square with your hidden blade, they won't have time to switch to their sword and you'll pounce on them and plunge your hidden blade into their chest which is quite satisfying. Or you can simply lock on from a distance and toss a throwing knife into their throat. It's also fun to get in a fight with them, immediately grab them, and then press toward the ledge with the stick to throw them to their death. That is a surprisingly quick way to get rid of a lot of guards who have followed you up on top of a high roof. Grab, chuck, grab, chuck, grab, chuck...huge success.

One thing that annoys me, despite downloading the entire game off the disc and installing it like a downloadable title, I still must have the AC: Revelations disc in the drive to play it. With a disc in the drive it defaults to highlighting it so every time I want to play I have to scroll down past all my PSP bubbles and launch it from my PSN folder. If there was no disc in the drive it would start at the bottom of the list. I wish selecting the 2nd disc (the one used to install the game) let you launch the game from there once it has been installed.

Also, I figured out halfway through the game that the 250-ish collectable flags are meaningless, WTF? You got an achievement for collecting them in the Xbox version but they don't actually do anything in-game. At least completing side missions eventually increase your HP bar.

After finishing Assassin's Creed 1 here are my final thoughts:
*Out-of-Animus story, more entertaining than the sequel, but the story ultimately amounted to the same plot point "buy the next Assassin's Creed to possibly, maybe, but not really get answers to your end questions."

*In Animus story I also liked a bit better, the character is a bit of a dick frustrated with order bureaucracy whereas AC2 is pretty much your standard, fresh-face newbie takes up arms because someone murdered your <insert parents, sibling, or spouse name here>.

*Cities were better in Assassin's Creed 1, they felt more organic even if at times it was to the detriment of movement throughout the city as it would be in real life.

*Combat, pretty much the same. You get a few new tricks in the sequel but it boils down to the same "walk up behind and blade in back" or "be surrounded by 5-6 of X guards as they attack you one at a time-ish in repetitive sword fighting. I don't think they really improved the combat that much in AC2, they just were able to break it up by adding other, non-combat related things for you to do like the tomb's platforming sections, building up your town, etc..

*It's pretty clear they had no idea how to end it though, as before the last few bosses they just drop like 70 enemies at you in a gauntlet which isn't challenging, since no matter how many enemies are present there is only room for 5-7 to surround you at a time, it's just hella annoying and time consuming.

*People made it seem like there was a quantum leap in quality between AC and AC2, but there were just a few iterative improvements and some things the original does better.

Final rating: Not as bad a advertised.

I own most of the series but havent played them.  It is a series of games I would like to take off my backlog in 2015.  I have also read that 2 is better than 1 and you should play 2 first and then go back and play 1 if you feel the need to.  It seems that you recommend playing them in order.  Is that correct?

I listened to all the people who said AC2 was SO much better than 1 in every way when it was just iterative improvements. They streamlined the free running a bit, added a few extra tools, added some sidequests, but the core combat is pretty much the same as AC2. So I would recommend playing them in order, but I wouldn't recommend playing them one right after the other as you will get burned out real quick. I'd put at least a 1 game buffer between each AC game.

Jan 07 2015 04:49 PM
I took off six Assassin's Creed games from my backlog last year. This game is an awful first impression into the series, but I'd still rather play it than Assassin's Creed III. AC II is great, but I think I like Brotherhood the most. Have you played that yet?