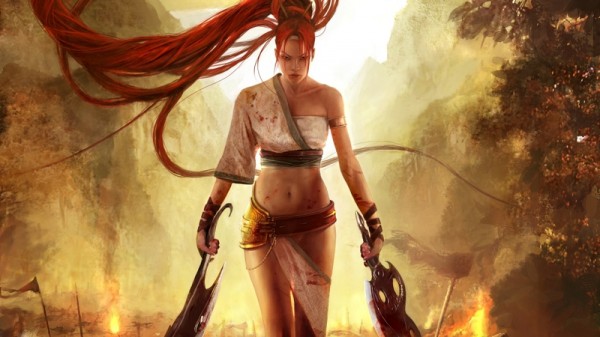 Heavenly Sword is an early Playstation 3 game, It was made in the time when developers were still enamored with quicktime events (there are a lot of them) and it features (thankfully optional) motion controls. The graphics are quite pretty even for a 7+ year old title but there are enough weaknesses in the core gameplay to detract from the experience.

Of course, since the power stance block breaker combo is a string of 4 slow attacks and they often throw lots of enemies at you at once it is sometimes problematic to pull off the entire string before you have to evade away to avoid getting hit in the back. This was particularly a problem in a fight near the end of the game which mixed a half dozen, hulking, power stance enemies with a half dozen speed freak ninjas which don't stay stunned on the ground very long.

I do like the idea of the stance system, but in practice it didn't work quite right. You can't switch stances immediately, often I would let go of the button to switch stances and then press the attack button, but the next attack which happens is still the previous stance. With how twitch based the sword play is at times that isn't ideal (compared to Devil May Cry where you can switch between weapons seamlessly).

Blocking is done automatically when you are in the correct stance, power stance nullifies enemy power attacks, ranged lets you dodge arrows, etc., but not while you are attacking. You also have the option to counter enemy attacks by pressing triangle just before or just as the enemy strikes you, you will retaliate with a high damage counter attack. Just like blocking, you have to be in the same stance as the attack type in order to counter. The problem is there is very little wind-up in the enemy attacks. So if you are in mid-attack when an enemy attack starts, there is not much you can do to respond to it, other than try to evade quickly.

This is another sticking point, the evade distance is pretty short. On one of the bulkier bosses he can do a string of several damaging, unblockable attacks and the roll distance is short enough that you can't always get away from the latter attacks in the string. That seemed like a missed opportunity to incorporate the stances in another meaningful way, varying the length of your evasion roll depending on your current stance.

Every once in awhile they will switch up the gameplay by having you take control of a young girl name Kai who wields a cross bow. The bow mechanic is very strange as it doesn't really make any sense in reality. You try to point and shoot the arrow close to where you want it to go, then you can enter "arrow time" which slows down time and allows you to slightly alter the trajectory of the arrow just before it hits the target. Again, they explain this mechanic in-game very poorly so I thought you fired it like a traditional crossbow, which isn't fun at all. There are also a few sequences where you man the catapults and fire giant boulders at the attacking army which has the same after-touch mechanic.

PRESENTATION
As I said at the top, the graphics are still gorgeous. I suspect that is where the developers focused the brunt of their effort which is why the gameplay wasn't quite tight enough. All of the characters are modeled well and the cutscenes were motion captured. The primary villain of the story (Bohan) is played by Andy Serkis (of Gollum fame) who also served as the director of the motion capture scenes. As a result the scenes with the villains are a bit overindulgent at times. Some of secondary villain voice work is pretty dreadful, particularly Flying Fox. Anna Torv however (of Fringe fame) is great as the main character Nariko as she can articulate well her rage and pain. The musical soundtrack is also top notch, haunting and beautiful.

I had heard high praise for the story prior to playing it and...it's ok. The gist is the Heavenly Sword was the weapon of a God who came down from on high to defeat a great Demon. When the Demon was defeated the God disappeared leaving behind his sword. The clan of the main character has dedicated themselves to keeping the Heavenly Sword safe. There was a prophesy that in the year of the fire horse a man would be born as a reincarnation of a God to wield the Heavenly Sword, a girl was born instead and the clan took it as a portent of doom. Now Bohan wants the sword and he will kill anyone in his way.

I didn't particularly like that it used the "the end is the beginning" style of storytelling. I feel they showed too much of the character's fate way too early that it robbed the finale of much of the narrative weight. It's also never made that clear early in the story why Bohan getting the Heavenly Sword is such a bad thing, he does not want to use it to conquer the world, he simply wants another great weapon for his trophy case. To Know WHY this is a bad thing you have to watch animated videos you unlock by obtaining collectables. Again, this is sloppy and silly, this is important information you need in order to know the stakes of the game and they treat it like an afterthought.

The game is pretty short 6-7 hours and there are a series of collectables called glyphs which unlock some animated back story videos, making of videos, and concept art and a hard mode. Given the weakenesses in the implementation of the stance system, I didn't have any desire to replay the game through on hell mode. For those who (don't) care about trophies, the game is from early enough in the PS3 cycle that it has no trophies.

BOTTOMLINE:
A beautiful game that can't quite match that with flawless gameplay. The 3 weapon stance system was a good idea, but its execution leaves much to be desired. Hopefully they can get it right in their upcoming spiritual successor "Hellblade."

One tip:
Most of what is written on the internet about how to deflect the fireball attacks of the final boss is described wrong. They say, "wait until just before the fireball hits you" (a reasonable person would assume that means when it is right in front of the player IE "just before") and then press the counter button, this is incorrect. You have to wait until the fireball DOES hit you, THEN press the counter button. It's like a power bunt instead of a home run swing which is the opposite of what you would expect. Once I figured that out it was pretty easy to deflect them 95% of the time.

Heavenly Sword was the first PlayStation 3 title I ever played. I remember checking it out at a Best Buy kiosk and just being blown away. It was a fantastic game for its time. Those Sixaxis parts were terrible, though.