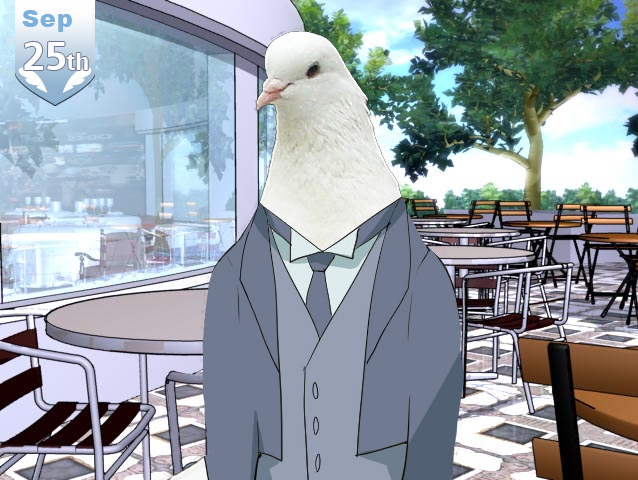 This time a review from a game actually released this year, and a vita game to boot, "Hatoful Boyfriend" released for the PS4 and vita (crossbuy) in July of 2015. It began as a short flash game for an April Fools prank, but when it soared in popularity the developer decided to create a full version of the game.

The premise of the game is you are a female, teenager who has been offered a scholarship to a prestigious, private school. The twist is, you are the only human student at this school. In this universe, birds have developed intelligence on par with humans and live in society among them. The school (up until a year ago when you joined) previously only taught birds and has a faculty completely composed of birds. What begins as a simple relationship simulator eventually veers off in unexpected directions as something sinister is awry at St. PigeoNation's Institute.

GAMEPLAY
This is purely a visual novel, there is not really any gameplay per se. It is all reading text and making selections from a multiple choice prompt.

The game's structure is like the inverse of Danganronpa. In that game there is a longer main tale and then a shorter mode to more easily speed through the ends of the other characters. In Hatoful Boyfriend, each playthrough takes between 15 minutes (if you skip all the text) and 50 minutes. You make choices as you pursue the attention of various classmates. Some of the stories are pretty typical high school type stuff (the best friend becomes something more, a crush on a teacher, etc.), but others are just completely bizarre such as when a manga obsessed classmate proclaims to be a fallen angel destined to stop an evil wizard.

Once you've seen all the endings from school mode (over a dozen) you have the option to play the main storyline The Promise, which is about 4-5 times the average length of the previous storylines and a completely different style of story. This tale weaves the bits of information you have learned about the various characters into a single, macabre narrative which delves deeper into many of the characters' back stories and the history of the world the game takes place in. It is by far the best storyline in the game and is surprisingly engrossing.

PRESENTATION
There is very little flair or flourish for a game with such a ridiculous premise. There is no voice acting, there is only the occasional bit of character theme music to set the tone. Character animation is extremely limited, it is mainly just static photos of real birds with simple, painted backgrounds. There is an option to display human portraits alongside the picture of the birds for the first time you meet them. Since they only appear once, I am unsure what purpose they serve and so I opted not to display them on all subsequent playthroughs.

Technically the vita version is a little flawed. Occasionally the music would become garbled or not play at all. I think some of the music files must be damaged as I believe it was the same character theme each time. Sometimes there was no music where I suspect there was supposed to be music, but that might have just been a developer choice.

The longer you play the more likely it seems to crash. though I played all the way through the full Promise tale in one sitting without a crash and I started from "new game". When going through school mode I would often load a save from just before the first branching decision as this was quicker than starting a new game. Two times after completing a playthrough I loaded up that save and the game crashed. So I suspect it is some flaw when you load up save games which causes it to start to become unstable. Still, it's probably a good idea to save periodically (the game gives you 12 save slots) even if starting with "new game." In addition to getting both the Ps4 and Vita version for the same price, the game features cross save support so you can switch back and forth between PS4 and Vita using the same save file.

Beyond technical problems there are a handful of very obvious spelling mistakes which briefly break the sense of immersion when they occur.

BOTTOMLINE
Much like Dangranronpa I was on the fence about how much I enjoyed it until the end chapters. The main "the Promise" tale is excellent and worth making it through some of the less interesting school stories. I paid $5 for it on sale and I would consider that fair, though I am a sucker for a compelling video game story.

Do you think your being an owl introduced any bias into how you enjoyed the game?