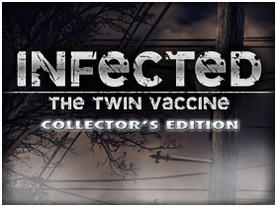 As the title implies, this game is centered around an epidemic/apocalyptic plot. As the disease spreads, you play the role of a scientist tasked with tracking down someone who is immune to the disease with the hopes of finding a cure/vaccine. As far as hidden object games go, the plot is somewhat refreshing and "realistic" and the game makes a commitment early on to try to tell a story instead of ushering you from one hidden object scene to another. Finding objects is actually not the main focus of the game as you'll be spending most of your time using objects that you find to progress in the game. Even within the hidden object scenes, you use objects you find to unlock others until you unlock the final object that will help you progress elsewhere. The plot is developed through interactions with a few NPCs who do well enough to tell the story and point you in the right direction in case you get stuck. Voice acting and animations are a little cheesy and repetitive, but above average for the genre. Gameplay itself is relatively easy with the only difficulty settings involving limiting the number of hints or skips you can use during the game. I only got "stuck" twice and consulted the Strategy Guide included in the Collector's Edition, but I wouldn't be surprised if most gamers wouldn't need it at all.

Overall, it's a decent story and experience if you're looking for a casual game and enjoy the epidemic/apocalyptic plot.

Would pay a few bucks for this, I love me a hidden object game (or at least I keep telling myself that, it's been a bit since I've actually played one).

Minor note for this review/blog in particular: it might help to work a bit on your formatting. One long paragraph, especially one that gets oddly moved around do to the picture at the top, is a bit difficult to read and would likely look better split into a few chunks.

Yeah, I'm getting used to it.  The preview feature isn't exactly the best so I have to post, see what it looks like and then go back and play with the formatting.  Also the picture size for this one might have been a little big.