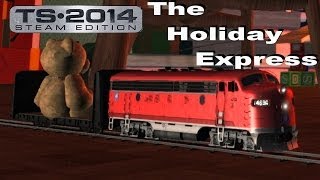 The Holiday Express is Christmas themed standalone DLC for Train Simulator 2014. Like some of their prior themed DLC, I wouldn't surprised to be pulled from the site pretty soon, but I snatched it up during the Steam Winter sale for $2.99.

The DLC is basically one red Christmas engine and a Christmas level that consists of a train track going around a Christmas decorated living room. The DLC also comes with 5 scenarios to complete, each giving you about 1000 XP once you compete them. The gameplay is pretty simple even if you don't play through the tutorial and if you buy the DLC without owning the base game I don't think there is any tutorial available. The basics are W and S keys control forward and reverse and A and D control acceleration and braking. The first scenario is a simple drive around the living room to patrol for security purposes, because that's what trains do! Other missions consist of returning misplaced presents under the Christmas tree, rescuing Santa's cookies after they were stolen by toy soldiers, and assembling toy block letters to spell "Merry Christmas" and driving the message up to the mantle. For most of the missions the only challenge is keeping within the speed limit as going past the posted speed limits will usually result in derailing around a curve which will force you to restart the mission.

The Christmas theme is nice and I'm sure a lot of us have fond memories of train sets adorning a Christmas tree, so it's a smart DLC for them to put out, but overall it is lacking in many areas. Graphically, the game just doesn't look all that great. At no point will you be tricked into thinking you are watching real trains or even a real toy train set. The camera angles are also a bit limited as I couldn't find one to get a complete side profile of the train. The game's goals aren't entirely intuitive either, especially the stopping points, and I had to figure it out on my own which made me replay a few levels. The last mission also lacks in realism, even though the game implies otherwise. Basically, you have to use your engine to assemble the message "Merry Christmas" and the game tells you the order is very important. During the first play through I spent considerable time making sure the letters were in correct order. The first car had the letters M and E and the second card had the letters R-R-Y-C so I made sure to try to hook up the back of my M-E car to the correct side of the R-R-Y-C car by driving all the way around the track to make sure I could reverse my train and hook them up correctly. I did so and the game told me I had completed goal #2, yet it ordered the letters E-M-C-Y-R-R. After that I figured out it just wanted the cars hooked up in the right order, even though the letters would be out of order. So basically, don't waste your time on the last mission and just hook the cars up in order and ignore the letter ordering.

Finally, with a DLC like this, I think it would be nice if it had a simulation mode where you could just turn on the train, set a camera angle, and watch it go around the room. Something like the crackling fire log DVDs and channels that you can set on TV during the holidays.

For $2.99, I was happy to have bought it, but at the current price I'd say this is a pretty big rip off.

So that's why you were playing Train Sim, of all games ^_^

Sorta glad I didn't buy it now, since while it did look like a sorta fun novelty, the lackluster graphics and slim amount of content were what turned me away, so I guess I made a decent call on that.

Yeah, I was trying to finish the scenarios and get this review done sort of close to Christmas!  You called it though, TS graphically isn't the great (most sims aren't really good graphically) and it is very limited gameplay.  Them charging $19.99 regular price is pretty crazy.   I think $3 should be the base price and .75 the sale price.

Yeah, I was trying to finish the scenarios and get this review done sort of close to Christmas!  You called it though, TS graphically isn't the great (most sims aren't really good graphically) and it is very limited gameplay.  Them charging $19.99 regular price is pretty crazy.   I think $3 should be the base price and .75 the sale price.

I think you're spot on with it likely being removed anyhow, since IIRC it went on sale right as it was released on Steam. Certainly unusual, and wouldn't surprise me if it was taken down within the month and the discounted price was just to make it look more enticing for the time it was on the store.