Geralt's latest adventure is nothing short of amazing 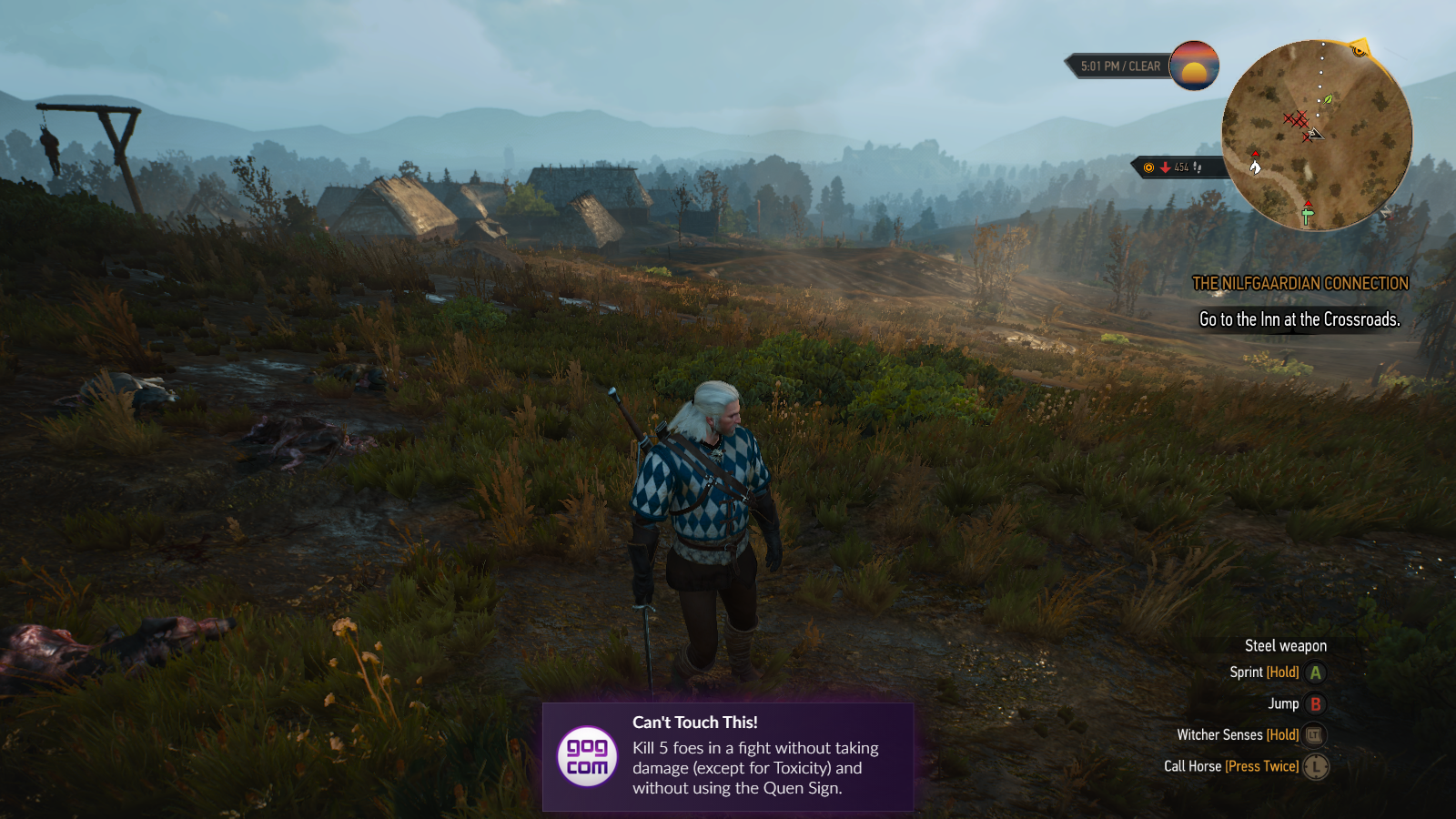 Well, according to GOG Galaxy, I've spent over 236 hours in the last five months guiding Geralt of Rivia on his quest to find and save his god-daughter, and what a journey it's been. Pretty much every aspect of the game has been improved over Assassins of Kings, but still retains its grounding in Sapkowski's morally-grey world of monstrous humans and sometimes-harmless monsters that makes the storytelling and characters so compelling.

The world of The Witcher 3 has opened up to an amazing extent; while the game was in development, CD Projekt RED boasted that it would be bigger than Skyrim, and I'm pretty sure they delivered on that. The game is divided into three main regions: Velen, Novigrad, and Skellige. Each region is littered with side-quests: monster nests, bandit camps, guarded treasures, treasure hunts, and witcher contracts. The game has a pretty straightforward fast-travel system that relies on waypoints scattered throughout the map; as is conventional, once Geralt discovers a waypoint, he can return to it from any other waypoint by referencing the map screen. You're also free to roam around the maps on Roach, Geralt's trusty steed (well, technically any horse Geralt rides he names "Roach," but, hey, let's not get hung up on technicalities). If you're a masochist, you can also run around the maps, but mounted travel is considerably faster. Both Geralt and Roach do have an occasional propensity to get stuck in trees when you're wandering through the woods, but otherwise pathfinding is pretty good.

Combat is an improvement over the second game, although I still prefer The Witcher's prompt-based sword combat. There are a number of tricks up Geralt's armored sleeves, all or some of which can be utilized in any given situation. Returning to the series are witcher signs, potions, and bombs. New to this game are decoctions, long-lasting potions that can have a variety of effects. Each potion and bomb has three tiers of efficacy and can be improved if the right recipe and ingredients can be found in the world. The witcher can use strong or fast sword attacks, and it is generally best to utilize some combination of the two. As in the second game, it's still pretty easy for Geralt to get overwhelmed when facing a large number of foes simultaneously, so the dodge-and-weave dance is back. When facing some of the game's trickier monsters, like trolls, giants, and golems, expect to do a fair bit of rolling out of harm's way as well. There is a technique to parrying human one-handed weapons (but not two-handed weapons), but I found it a little too tricky for me; more often than not, my ham-handed attempts at a parry would just result in my opponent scoring a hit against me.

The Witcher 2 had a lengthy prologue involving a battle and the politics of the Northern Realms which, even for those who had played the first game, was somewhat arcane and full of names and places that meant little. CD Projekt RED learned from that experience: this game's prologue involves Vesemir and Geralt hunting a griffin in the town of White Orchard, and it's a much more engrossing and entertaining experience.

The characters, voice-acting, and story in this game are all top-notch. While the nature of the quests in this game is like any other RPG, it is in the telling that they excel. My favorite example is when Geralt stumbles across a village in Skellige where the elders are at odds with the younger folk over the return of a monster that some view as a guardian spirit of the village. Geralt knows that the leshen is a monster but he can choose to either slay the beast (thus tacitly siding with the younger generation) or attempt to appease it, thereby siding explicitly with the older generation. The choice is not black-and-white and its consequences are not easily foreseen, which is part of what makes the game so interesting. Similarly, the main story is not remarkably original in and of itself (Geralt must prevent the leader of the WIld Hunt from unleashing certain doom upon the world), but it is the intriguing branching paths our protagonist must take to get to its conclusion that make the game worthwhile. Personally I enjoyed the main story, but, as with Skyrim before it, the most fun parts were side quests, and especially the monster contracts, which don't always require but generally encourage some detective work and research.

CD Projekt RED hit a home run with what is alleged to be the White Wolf's last adventure on the PC. Because I don't think any non-Polish studio could have done Sapkowski's hero and his dark fantasy world justice, I hope that they will take up the mantle again a few years down the road. In the meantime, I have two big expansions to swallow up the remainder of my free time in 2016. . . .

Excellent review!  This game is my secret shame of this console generation.  It's a game I was incredibly hyped for, gobbled up every bit of info I could pre-release, watched and rewatched every new trailer that came out, preordered and picked up on release day, and then... hardly played at all.  I started it, got an hour or so in, still in the early stages of the prologue, then fell away from it.  A couple months later, feeling weirdly guilty, I started it again, got to about the same point I had gotten to before, and fell away from it again.  It's still sitting in my gaming cabinet, waiting patiently for the 3rd time (hopefully the 3rd time will be the charm) I give it a go.

The strange part is that I haven't stopped playing because I wasn't enjoying it.  I was.  I think I get a little daunted by the sheer size of it.  A lot of my gaming these days is done in 20-30 minute chunks in the morning before work, at 4:30 a.m. when my wife and kids are still sleeping.  After work and on weekends, I don't often get substantial free time that I can devote to gaming, so a massive sprawling RPG doesn't always work the best for that schedule.  Some day, when the next big thing I'm hyped for is still months away, I'd like to go back and give it time to get it's hooks in me.

Hey, thanks very much for the comment. I hope the third time is indeed the charm for you, because it's pretty fantastic. I actually am in a similar boat regarding time; I tend to do a lot of my gaming before I leave for work as well, and that rarely allows for 2-3 hour gaming sessions. Many people have similar issues, I believe, but if you like the fiction or the previous games, it's worth investing the time. As you see from my review, it took me about five months to finish and that was spending the majority of my gaming time on it. Good luck and thanks again for reading!