Thoughts on The Political Machine 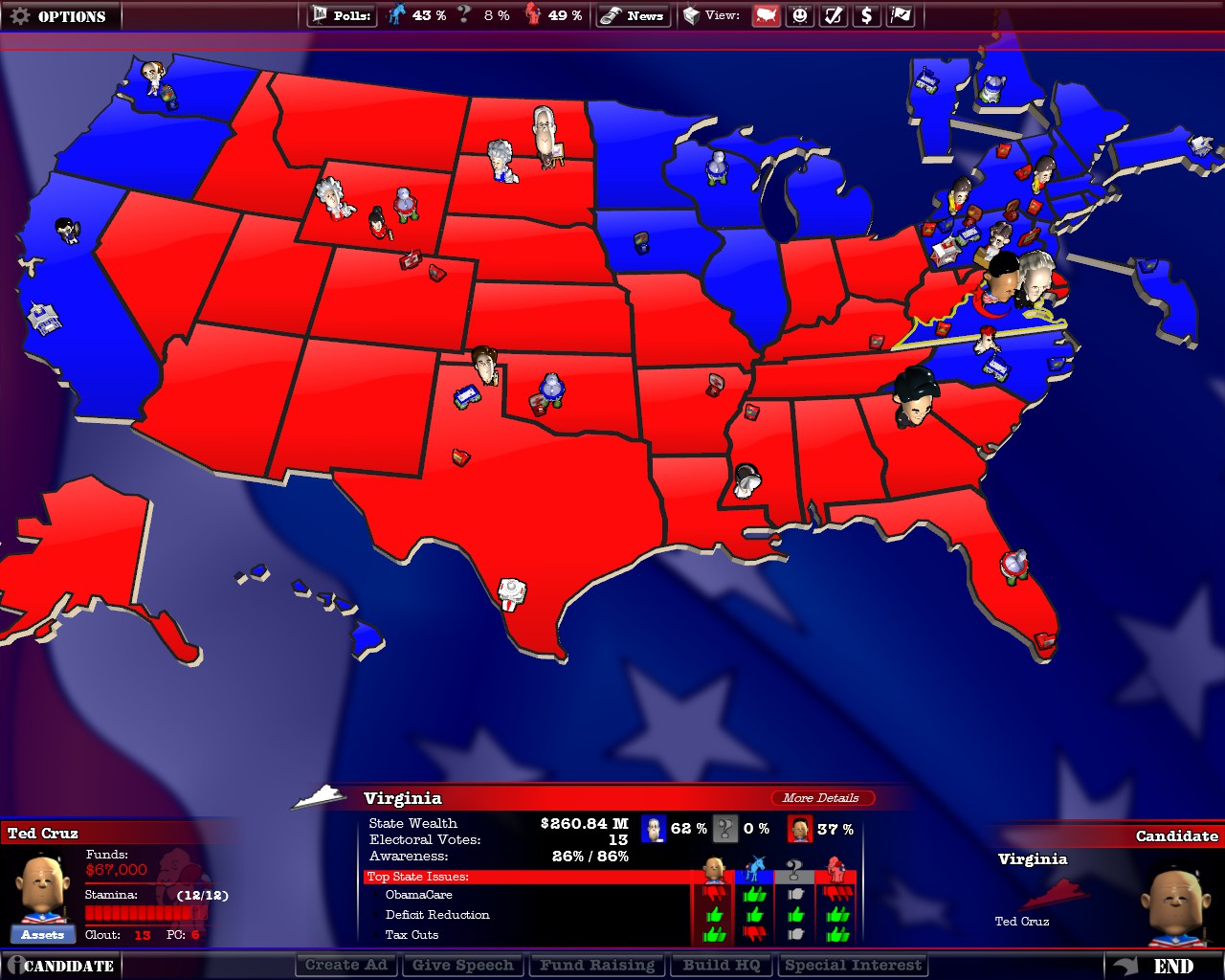 So I more-or-less abandoned my epic 121-week campaign (Clinton v. Cruz) a few months ago, and in light of the outcome of the Republican presidential primary, it appears that it was not a moment too soon. It was, frankly, in addition to being splendidly irrelevant to the real world, becoming a bit of a slog. I quit around week 20, and it was already turning into a tit-for-tat kind of scenario where, possibly in part because I chose random demographics at the beginning instead of settings that roughly approximate what the country actually looks like, I would send Clinton to a state that was hard red or going purple, spend money and make speeches to turn it blue and then a few weeks later, Cruz would pop up and attempt to undo my gains in that state/region. In this context it was getting boring, which is one thing a game should never be.

On that note I wanted to do a semi-review of The Political Machine 2012, the version of the game that I've been fiddling with since earlier in the year. The Political Machine was the brainchild of Brad Wardell, Stardock's president and a political junkie (he frequently posts on the Stardock political forums under the name Draginol or at least he did when I used to hang out there on a regular basis), and it was originally released to coincide with the Bush v. Kerry showdown of 2004. It was adapted from Stardock's earlier The Corporate Machine, and the series has evolved remarkably little in the last 12 years. As with most simulations, it's not a graphical workhorse, but the decision to switch from somewhat cartoony graphics in the original iteration to a bobblehead representation of candidates in 2008 and later versions was an ill-conceived one, in my view. This may have something to do with my passionate loathing of bobbleheads, though. In any case, the game itself is much more entertaining in smaller doses (the "short" campaign is 21 weeks, and that feels about right--most Americans aren't paying that much attention in real life until at least five months before the Election Day). The basic idea is that you either pick a pre-made candidate (the game includes a number of real recent candidates like Donald Trump, Hillary Clinton, John McCain, Mitt Romney, John Kerry, George W. Bush, et cetera, as well as some jokey [in the sense that they're dead] candidates like Richard Nixon, Abraham Lincoln, and Theodore Roosevelt) or create your own candidate.

The problems with the game's systems appear right off the bat because, in a system that will be familiar to RPG players, the game gives you a pool of points to apply to characteristics of your candidate and policy issues, but the pool is a bit absurd. The candidate numbers are a little odd, but workable; there are three primary attributes, stamina, money, and fundraising, which directly affect your weekly activities, and eight secondary attributes ranging from intelligence to religiosity. All of these attributes start a 5 on a scale of 10 and you have 10 extra points to allocate. You are free to reduce the number to 0 or increase it to 10 for any stat that you choose. The bigger problem comes in the "platform" area. Candidates can have positions that range from -50 to 50 on a list of 45 (!) issues and only 50 points to distribute among all of these issues. This makes for some really unrealistic platforms--create a hardline right-wing Republican candidate who has a very strong opposition to abortion rights and a very strong view of America as a Christian nation and he or she can effectively have no other positions on the other 43 issues (the default stance being "I have no formal stance on this issue"), which include things like traditional values, gay marriage, and capital punishment. Thus, it's sort-of possible to be a fiscal conservative or a social conservative, just to use the Republican spectrum as an example, but never to be both at the same time.

The bulk of the game consists of moving your candidate's (and once you've gotten far enough along, your vice-presidential candidate's) bobblehead around to various states engaging in fundraising, speech-giving, advertising, or building a campaign apparatus in the form of hiring operatives or constructing campaign facilities. Your candidate's ability to do these things depends on his or her stamina (a word that's been really overused in this year's election), as it will cost x stamina points to hold a fundraiser, give a speech or create an ad, money (this really just determines an approximate level of starting funds), and fundraising acumen (this, along with other factors like your name recognition and popularity in a state, determine how much money you can raise). Here again reality is oversimplified for the sake of gaming, and I understand that this has to be done to a certain extent but it leaves the game feeling a bit hollow. First, the amount of money you will typically have rarely exceeds $10,000,000, and in reality that's pretty much one or two ad-buys in a swing state. Second, the idea that a candidate could only do 1-3 fundraisers or speeches in a week is patently ridiculous--during primary season alone candidates will often travel all over the map giving speeches and raising money in the space of a week.

Another problem, and one that I would have said prior to 2016 is an inaccurate reflection of our political system, is how easy it is to get away with lying in the game. As Hillary Clinton, I can travel to Texas and give a barn-burner of a speech about how Ted Cruz is in favor of big government and increase my popularity and decrease his simultaneously. I can then turn around and go to California and bitterly complain about how Ted Cruz is opposed to big government the following week and achieve a similar result. Likewise, I can literally tell different crowds in two different states that I am opposed to and in favor of a specific issue (like raising taxes). In reality this is exactly the sort of thing that should get a candidate in serious hot water. However, I watched the vice-presidential debate this week where Mike Pence essentially flatly denied that his running mate had said things that he quite clearly said, and many mainstream media sources are saying that, if he didn't "win" the debate, he at least performed admirably. This leaves me wondering whether this is a design feature rather than a flaw. I'm still going to say it's a flaw because I don't believe that anyone could have prognosticated the strange political year that this has been, least of all Stardock.

This is the part of my commentary where I circle back to an obvious point--why am I reviewing a four-year-old iteration of a game that has a more current version (2016)? The reality is that the game has changed exceptionally little over the course of its lifespan of four presidential elections. Stardock releases new candidates and new issues with every new version, but it's essentially the same game. There was a "campaign" DLC released earlier this year that is basically like a ladder in a fighting game--defeat one would-be challenger in a sequence until you ultimately emerge victorious; the idea makes a lot more sense in a fighting game.

Would I recommend The Political Machine? Probably not. If you are playing it because you think you'll learn something about the presidential election process in America, you're definitely wasting your time. There really isn't anything remotely realistic about this simulation, and in and of itself, it doesn't really explain anything about why our politics are the way they are. If you're looking for a simulation with a bit more depth and realism, check out President Infinity (yes, it's a stupid name). At $19.95, it's twice the cost of The Political Machine, but includes a lot of features that Stardock's offering lacks, such as a true primary campaign, third parties, and campaign surrogates.

Person A has the support of big corporations. Corporations use their influence on behalf of Person A to win the election so they can collect their favors later. Person A wins, all other persons are immaterial.

Yeah, it's probably a little more complicated than that.

But I will agree that with Citizens United and some other recent SCOTUS decisions, it seems as though what individual humans actually want matters less and less.