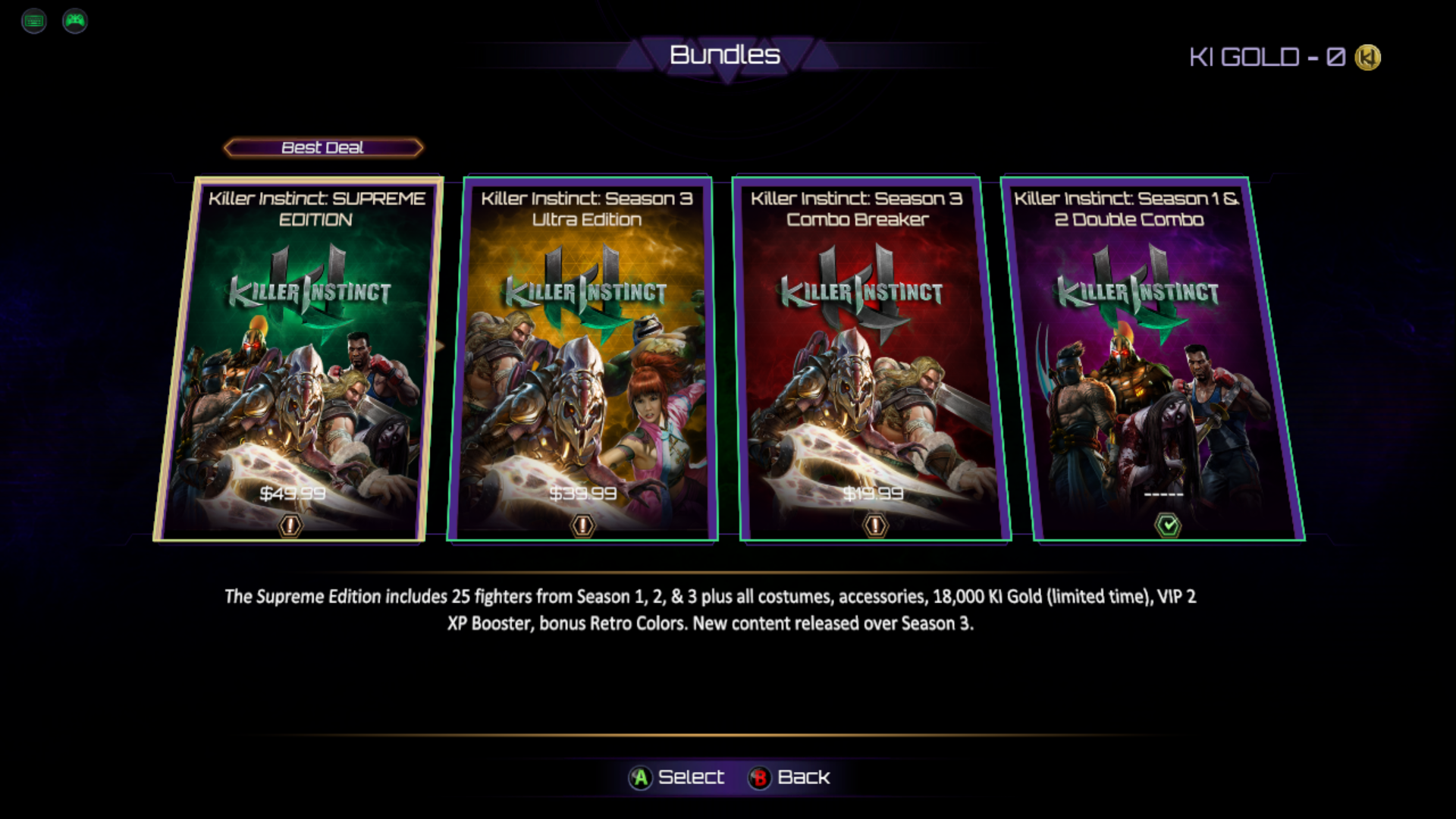 Killer Instinct is the latest in a short line of fighting games originally developed as an arcade cabinet in 1994 and later ported to Nintendo consoles; in 2013, the series was ported/rebooted for an XBONE release. Unlike Mortal Kombat and Street Fighter, Killer Instinct only had one cabinet in its evolutionary history, and it's overall a less mature product than the former two series as a result. Double Helix made the 2013 version and Iron Galaxy is now producing the updates to XBONE and Windows 10 versions.

The Windows 10 port was released this past spring and it's a sort-of free-to-play model that is unique in terms of PC fighting games (and probably the majority of console fighters as well), but seems very familiar to players or observers of the mobile games industry. There is a rotating "free" fighter that anyone who downloads the game can use during the week that it is free in any game mode. Individual fighters are available for purchase ($4.99 each) and the roster currently consists of 26 fighters over three "seasons" of content. The seasons add different single-player modes to the game, with the first two being fairly generic ladders that have character-specific cutscenes (some with voice-overs!) separating the individual matches. The third, called Shadow Lords, adds an interesting meta-game layer where you deploy fighters on missions, armed with bonuses and equipment that can be crafted at a sorcerous "vendor," around the world of varying degrees of difficulty, with the overall goal being to weaken the forces of the evil god Gargos in preparation for a final confrontation with said ultimate villain.

After playing for a few hours over the course of several months, I was intrigued enough by the game to buy one of the bundles available to Windows users, which is the only way to acquire a reasonable number of characters without shelling out $5 apiece. The available bundles are shown in the attached image, although it doesn't show the price of the Season 1 + 2 ($29.95) because that's what I ponied up for. Ironically, perhaps a week or two later, Microsoft announced that there would be a Definitive Edition release for Windows 10. As you can see from this link, this edition includes all of the Season 1-3 content as well as an exclusive skin and CD soundtrack for $39, which is at least $20 cheaper than you can get this content through any other means. I'm not super-hip to the XBOX Anywhere initiative or I would have realized that this was probably an inevitable development. Having spent more time with the game since then, I feel as though I fairly seriously overpaid for this game, especially considering that the only real advantage to having a lot of characters seems to be that you don't have to wait to play one you might really like, but if you really like one or two, it makes a lot more sense just to buy those individually. Because there isn't any content that is gated by the F2P model in any real sense, it really doesn't pay to get one of these bundles, unless there is a significant sale at some point.

This is a different business model than the traditional game where you pay one price to get the majority of the content up front, with some DLC characters and/or skin packs available later. Perhaps one of the reasons why this seems so unconventional is that all of the content wasn't technically even available until years after the game's initial release. The "season" single-player content, with the notable exception of Shadow Lords (which wasn't available until about a month ago), was ported over in its entirety to Windows earlier this year, but it was released gradually on XBONE. This feels more like the way a mobile game or an Early Access title is released as opposed to a normal PC game.

This single-player content includes the first real tutorial for the game, which is unfortunately unskippable and must be played every time you start a new Shadow Lords game (meaning you lose or defeat Gargos or just decide you want to start over); there is a training mode that the game has had since Day 1, but it functions mostly like the training modes in other fighting games, which is why I wish Iron Galaxy would excise Shadow Lords's tutorial content and add it to the single-player menu as a standalone option. Note that you can play any of the season single-player modes using the free fighter of the week, at least as far as I can tell; I'm not quite sure how Shadow Lords mode works if you have no characters unlocked, but I assume it probably works in a similar manner as the other single-player modes--your starting "main" character will be the free character of the week.

Shadow Lords is the closest the game comes to telling a coherent story; Killer Instinct does very little in the way of explaining any of its factions and even the individual characters don't get much in the way of introductions when you're playing with them. Some of the characters clearly have histories with one another, some are evidently considered "good" and some "evil," but without consulting the internet, it's not very obvious which is which and why.

Many aspects of Killer Instinct feel dated and this contributes to the game feeling like a knock-off of something like Mortal Kombat X or Injustice. There are unskippable intros and outros to every match and they don't vary; each character has exactly the same comments or noises to make when a match begins or ends. Unless it is part of a specific scripted sequence in a single-player mode, no characters have any meaningful pre- or post-match banter. This leaves the characters feeling a bit two-dimensional. The bombastic announcer proclaims every victory or failure and every combination attack as though he has an unfortunate stutter. The hard rock soundtrack serves as a superfluous aural undertone to every bout.

So what's the bottom line? Ignoring relative value-for-dollar considerations, is this a good game? As I said earlier, it feels like a knock-off of a more popular game. Maybe this is at least in part because I tend to be more interested in the main story portion of most any kind of game, fighting games included. In a head-to-head comparison, therefore, Mortal Kombat X wins handily because it HAS a story mode. Mortal Kombat tells a story of generations of MK fighters, the offspring of the original generation working with their forebears to defeat the elder god Shinnock. Killer Instinct tells a group of disparate stories that might appear to be related if you were able to connect them together properly like a jigsaw puzzle, mostly because it doesn't have anything that you could really call a story mode, despite what the game suggests to the contrary. It doesn't help that the production values are not fantastic; the artwork and sound design are adequate and voiceovers are few and far between. Personally, I couldn't recommend Killer Instinct at any pricepoint other than the free one at the moment.

You didn't like the announcer or soundtrack? Interesting. That's usually the one pro that everyone can agree on. Much more exciting and hype then other fighters in the audio department. But it sounds like we go into fighting games for different reasons. I go for gameplay first then story and characters. While sounds like you're more concern with the lore and world. Which is cool, people have their own preferences. Personally as a game I've had more fun with KI, but undoubtedly the production value of MKX and story mode is above many other fighters. Though I was a little disappointed with the story mode after MK9 fantastic one.

Hey, thanks for commenting. Yes, it does sound like we're taking different approaches. I actually thought the MK X story was a good direct sequel in many ways to the one in the previous game. It was a little jarring the way the narrative skipped around in time, but I still thought it ended well. As I said earlier, I feel that Killer Instinct really lacks a coherent narrative that ties all of the character threads together in a single story arc, and given that this game is considered to be a "reboot" in the same way that MK 9 represented something of a reboot for its franchise, this feels like a missed opportunity. On the other hand, for most people, the story mode is not the core experience they're buying a fighting game for, so it really is a matter of perspective.