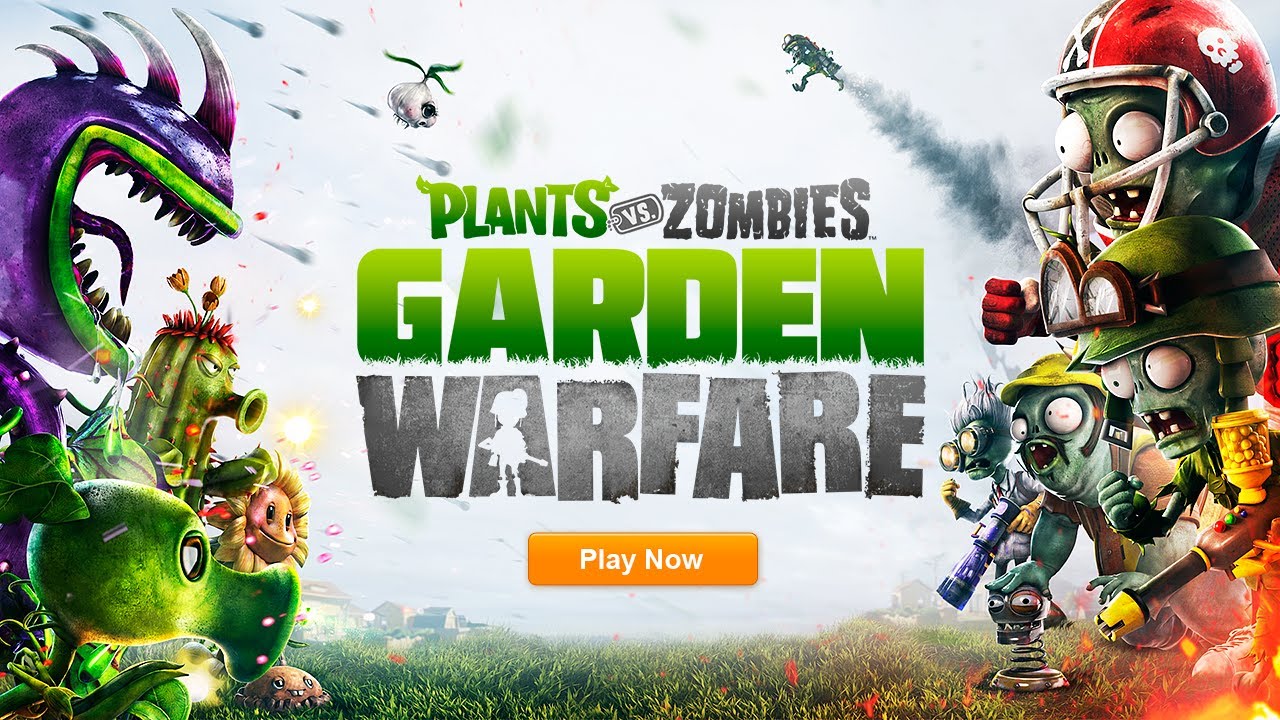 Plants vs Zombies: Garden Warfare is a third-person multiplayer shooter that was developed by PopCap games before being published by Electronic Arts in February of 2014. It’s available across all the major platforms (Xbox 360, Xbox One Playstation 3, Playstation 4 and Microsoft Windows) and also EA Access. Primarily a multiplayer game, Plants vs Zombies: Garden Warfare has an extra mode called Garden Ops (think MW2’s Spec Ops) which can be played in single player mode.

Plants vs Zombies: Garden Warfare is much more than just a one-trick pony. With so many modes it is understandable that some get pushed in to forgotten corners, but try them all as they each hold their own merits:

Team Vanquish: Team Vanquish is the go-to mode of GW. A Team Deathmatch style mode in which plants and zombies go head-to-head in a good ol’ battle where the first team to reach fifty kills wins.

Gnome Bomb: Very similar to the CS:GO favorite, Attack and Defend. In Gnome Bomb the objective is a free-running gnome that needs to be captured and detonated at the enemy’s bombsites. Once detonated, the gnome needs to be defended from the opposing team disarming the bearded fellow.

Suburbination: You guessed it, Suburbination is a parody of Call of Duty’s, Domination mode, where teams fight to hold three areas across the map. The more areas held, the more points are acquired.

Mixed Mode: In Mixed Mode you play a playlist of all the above modes (thanks to the ‘Tactical Taco Party Pack’. Prior to this, Mixed Mode only featured the Team Vanquish and Gardens and Graveyards modes). In each game you alternate between playing as plants and playing as zombies.

As you can see, GW2 has many modes and each of which will hold appeal in different gamers and gaming styles. The same can be said for the different classes on each side. The classes are perfectly balanced to give every player their ideal.

The zombies are the anti-heroes of Garden Warfare. The undead hordes -as evil as they are- have some great characters. As with the Plants team, the selection offers a great balance.

The foot soldiers are your go-to basic infantry zombies and the perfect class to pick up and play for beginners, a good all-rounder.

ZPG: A shoulder mounted missile launcher for when the situation calls for a little bang.

Rocket Jump: A quick boost in to the air. A great ability to have at hand for getting out of sticky situations fast or reaching elevated positions.

The engineer is the gadget man of the zombies. His crazy inventions can go a long way to change the tide of battle.

Sonic Grenade: The sonic grenade is effectively a stun grenade. This stuns plants in a small radius and can unearth burrowing Chompers.

Proximity Sonic Mine: Proximity mines that can be strategically placed. When stepped on, this explosive spud stuns plants for around 5 seconds.

Jackhammer: The engineer can mount and ride his jackhammer to increase his speed.

The scientist is the healer of the zombies. His best use is to closely follow teammates providing support but his goo-blaster makes him very useful in close-quarters battle.

Sticky Exploding Ball: This is well, a sticky exploding ball. Attach this to create a deadly trap that explodes when an enemy comes within 50 meters.

Warp: The scientist has the ability to warp to a close location within his vision.

Heal Station: A support ability that heals all zombies within its radius.

Imp Punt: Imp punt is exactly what the name suggests. When using this ability your all-star punts and imp that rolls a short distance before exploding. Imp punt deals massive damage.

Dummy Shield: Dummy shield is a shield that can be deployed as instant cover for you and your teammates.

The pea-shooter is the all-rounder of the plant world and its simplicity makes it an ideal option for a beginner.

Pea-Gatling: This ability makes your pea-shooter root itself in to the ground and turns it in to a Gatling style turret “RATATATATA”.

Hyper: Turns your pea-shooter in to a four year old after a bag full of candy. Run faster and jump higher with the hyper ability.

The sunflower is the healing class of the plant world. It’s sun pulse is a fantastic weapon at all distances and it’s healing powers make it a great character to be near. The sunflower is another great beginner’s class.

Heal Beam: Heal beam is a beam of solar power that attaches itself to friendlies healing them in the process.

Sun Beam: The Sun Beam is a powerful beam of solar energy (much like the heal beam) that deals damage to any enemy it touches. The character routes itself to the ground when this ability is activated turning it in to a turret and a force to be reckoned with.

The chomper is a Venus fly-trap with a striking resemblance to Audrey 2 from The Little Shop of Horrors. Having no main weapon, the chomper disposes of zombies by simply devouring them. A powerful class, but not for the beginner as it takes a lot to get used to its abilities.

Spikeweed: Spikeweed is a small plant that can be dropped to act as a sort of mine. When an unsuspecting enemy walks across spikeweed they are trapped in a suspended position. This is great for placing on corners.

Goop: The only ranged(ish) attack in the chomper’s arsenal. This ability grants you the power to fire out gloop. When hit by gloop enemies are slowed down and take damage over time and are unable to use their abilities.

Burrow: My personal favourite chomper ability. With this, your chomper burrows under ground and can jump up at any time and eat a zombie in one fell swoop.

The cactus’ long-range weapon, spike shot, makes this plant the sniper class of its team. It’s always better to try and get in to a good vantage point when using this class, and to avoid close-quarter encounters.

Potato Mine: The potato mine can be dropped in threes and explodes when stepped on, dealing massive damage.

Tall-Nut: The tall-nut ability reflects the all-star’s decoy shield. Tall-nuts are dropped to slow zombies down or to be used as effective cover to snipe from.

Garlic Drone: My favorite ability from the plants’ team. On activation, the cactus deploys a controllable drone that can fire garlic seeds. A great ability to use to get stuck in to the action from safe distance or to get that first vanquish.

As you can see, Plants vs Zombies: Garden Warfare offers a lot in the way of characters and game modes. A cute take on Call of Duty and the Battlefield series, Garden Warfare is a sure-fire winner. The fact that Gamer Bargain offers a G2A coupon code makes this beauty even more of a must-buy.

The whole feel to Garden Warfare offers younger gamers a chance to play a shooter game without being subject to unnecessary violence or gore. Great for parents and kids alike and I highly recommend it for any shooter fan.