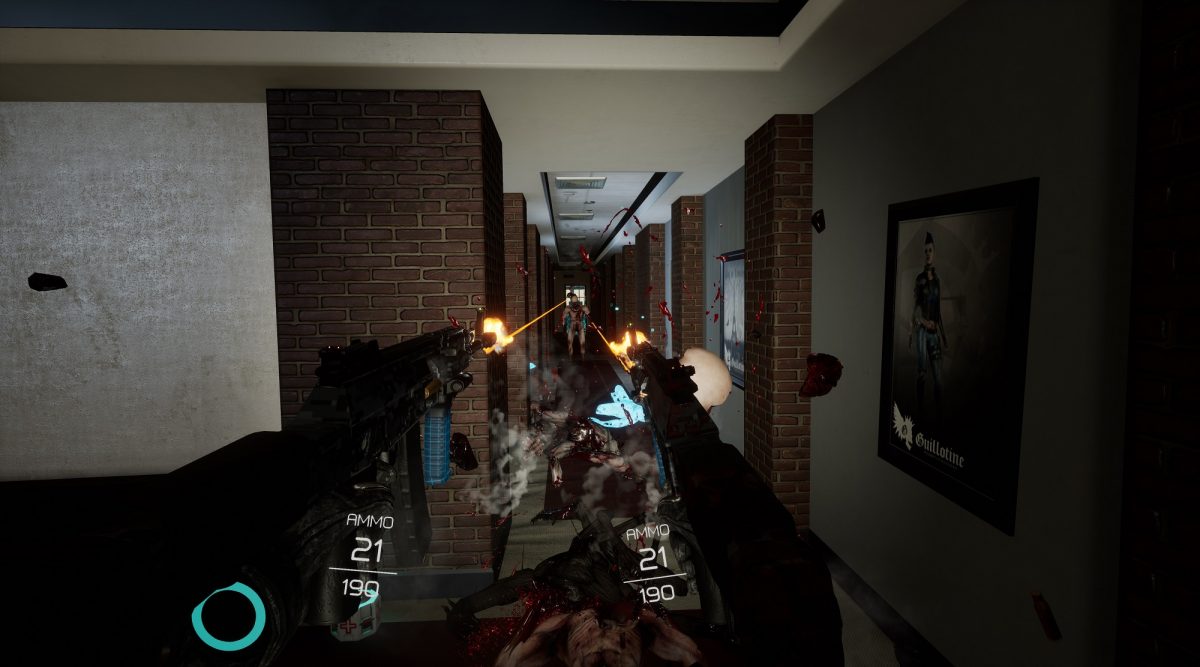 Killing Floor: Incursion is a great example of how to take an existing IP and make it work inside of VR. The baseline series of Killing Floor games is all about fighting off relentless waves of zombies (referred to as Zeds in the Killing Floor universe) and other grotesque, deformed, and horrendous creatures. At its core, Incursion has a lot of that too, but it’s presented in a very different package.
For the most part Killing Floor 1 and 2 are survival wave shooters. You and up to 5 other people will face off against the waves of enemies until you succumb to their numbers and eventually go down in a blaze of glory. In doing so you unlock perks, upgrade gear, and progress within each match. There are some other elements and variations to it, but that’s the general concept. With Incursion, the VR iteration of the franchise, things are a bit slower paced.
You and up to one other person embark on your quest to try and escape a training simulation that’s gone awry. Creatures are spawning far earlier and more frequently than they should be and, as it turns out, dying in the simulation can actually harm you in the real world too. Levels are large (borderline labyrinthine in some cases) and feature tons of areas to explore and a few puzzles to solve. There’s an actual plot to pay attention to and reasons to do more than just rack up headshots. For the most part, it actually works well too. While in VR I always find myself more eager to learn about the world around me, explore, and get engaged with my surroundings so it feels great to play horror games that appreciates that despite the subject matter.
Horror games are all about pacing. Visual scares like deformed creatures and terrifying beasts are important, as are the audio cues, jump scares, and foreboding atmospheres that pervade most modern horror games, but none of that matters without good pacing. If there are lots of enemies coming at you from every which way constantly then the increased action helps keep adrenaline pumping, but it prevents the player from settling into a sense of calm that you can then rip away all the more violently.
Resident Evil 7 is a great example of a well-paced, varied, and truly terrifying scary horror games. Killing Floor: Incursion goes down the more action-packed zombie killing path, which is a perfectly acceptable and powerful type of experience as well, but it hits on very different notes.
Every now and then when all the enemies around me were dead and I was left with nothing but the silence of the air and the feeling of sweat on my palms with a bit of subtle dread starting to set in. But then, after I’d slain my fifteenth zombie in a row and saw a flood of more coming down the corridor, my action-hero persona turned on and I got the blood lust. I was no longer scared of my enemies, but instead wanted nothing more than to see their heads explode like bloody piñatas. In a way, Killing Floor is special in that it can elicit such disparate emotions that are typically reserved for very different types of games.

At the root of it all though, the action is what Killing Floor is really all about. Luckily there is a whole assortment of tools to rid the digital landscapes of zombies from pistols and shotguns to axes and assault rifles. Lining up headshots in the scope of a sniper rifle feels extremely satisfying too.
Going into Killing Floor I expected to spend a lot of time using pistols and standard machine guns. But what I realized while playing is that wielding a melee weapon is what led to a lot of the game’s most intense moments.
Slicing the head off of a zombie with my knife, flipping it in my hand and throwing it into the skull of another, then pulling my shotgun off my back to blast two crawling enemies away before swinging the barrel around and lopping off another’s arm made me feel more like a badass than perhaps any other VR game to date.
The worst part though is that it just doesn’t last as long as I’d have liked. There are only four total levels, each of which is split into three separate checkpoints accessible from the level select screen. For example, they’re described as Farmhouse, Farmhouse Mid, and Farmhouse Boss — those three combined only took me about a half hour. Some levels are longer than others, but when it was all said and done the game only took me around 3-4 hours to complete once by myself. The difficulty seems to scale when playing with someone else, but it doesn’t really change the levels themselves.
Another issue is that, with boss fights in particular, the difficulty seems to spike erratically and without much build up. Having no problems at all and then suddenly hitting a wall of dozens of enemies in a tight space that overwhelm you happened a few times and didn’t feel fair.

Ultimately fans of games like The Brookhaven Experiment and Arizona Sunshine are going to find a lot to love with Killing Floor: Incursion. The base movement method is point and teleport, but you can enable a full smooth locomotion option as well. The narrative is told in a slightly comical, tongue-in-cheek sort of way that made me smile more times than expected and really did help lift the mood.
A game forcing me to chuckle to myself after nearly needing to change my underwear from the last combat sequence is never a bad thing.
Killing Floor: Incursion is absolutely best-played with someone else in cooperative multiplayer. I had a blast on my own but the intensity and fun multiplies when another player is thrown into the mix. Once you get the hang of all of the various weapons Killing Floor quickly becomes one of the bloodiest and goriest VR games on the market. It’s a delight to play through.

Final Score: 8/10 – Great
Killing Floor: Incursion isn’t the best zombie game I’ve played in VR (that would still go to Arizona Sunshine) but it does a lot right. The unsettling atmosphere is pervasive through each level and the excellent gameplay mechanics between melee and gun combat feel visceral and satisfying. While it does clock in a bit shorter than I’d have liked with only four levels, they are each large and fun to explore. I absolutely recommend that you grab a buddy for some insane co-op fun and lop off a few zed heads for a good time.