Patiently waited for the previous generation 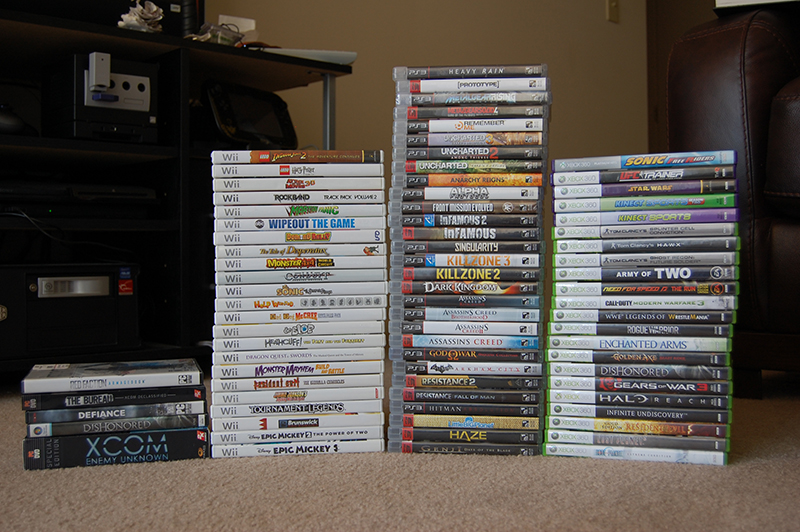 We took full advantage of the GameStop 4 for 10 and ended up getting more than just the games I wanted off their promo list when I went searching. It is amazing how many of the older PS3 and Xbox360 games are around $2. I saw a whole bunch of other ones around $8 that I wanted to pick up but restrained myself till the next time a buy 1 get 1 or something comes along. I did find some sweet clearance new PC games while I was there as well. They were all gutted "new" copies but seemed to have everything in them that was supposed to be there.

The biggest downside is that quite a few of them are not in great shape. Some of the covers have water damage. It seems like a lot of them were resurfaced. A few even have some sort of shiny sticker around the center hub which is to reinforce it I imagine. Most of the cases were also filthy. I did my usual routine of goo gone to remove the stickers and the really grimy stuff, then washed the case with dish soap and a soft sponge.

When all is said and done we had a good time going around to all the different stores. There are about 10 around in my area and it was interesting to see how differently they are run or just the general attitude of the people that work there. Most of the stores actually have nice people that did not hassle me about pre-orders or their credit card and helped me to find the best version of the game they had at that location. There were a few places I had to argue with the people working there if I brought up a complete copy of the game and they gave me one with a generic case and no manual. I understand it sucks to have to print new price stickers for a new display case but just do it!

All together with all the games I found at GameStop and 4 sealed ones I found at 5 Below it ended up around $230. Thanks CAG for the heads up about the 4 for 10 deal and the PC game price drops.

The console war is for suckers.

The console war is for suckers.

It's not a war. They are all friends at my house.