Not to be confused with the Wii U exclusive of a similar name, LEGO City Undercover: The Chase Begins chronicles Chase McCain’s first run-in with Rex Fury. It takes place two years prior to the events in the Wii U game, but shares many similarities as it’s an open-world game set in the same metropolis. Is this 3DS entry capable of bringing the charms of LEGO City to players that may not yet own a Wii U and at the same time appeal to those wanting to build upon their at home LEGO adventure?

Players of the Wii U game will instantly recognize the confines of LEGO City. All of the areas in The Chase Begins are versions of the same locales you previously visited in the console version. It all looks very similar in layout, but the size of the environments has been scaled back and some boroughs of the city have been completely eliminated. Since this is a prequel, I guess they technically haven’t finished the construction of those areas in the city yet. For a portable game, though, the large environments are of impressive scope but they come at a price. The loading times that plagued the Wii U game resurface on the 3DS, but they pop up more often as entering a different part of the city requires a load screen. And speaking of popping, the draw distance in the game is not satisfactory as objects pop into view only a few feet away from where Chase is standing. This not only affects the game’s visuals, but has a direct impact on how much fun it is to explore the city. A lot of what made the Wii U game so enjoyable was how densely packed the city was with items to interact with. Technical limits rope the scope way in (and technical limits actual made the game crash a few times on me), and it was rare that I could see something in the distance that I’d want to go investigate. Combined with the fact I was playing through recycled environments, my willingness to explore in The Chase Begins was severely dampened.

The primary difference in the structures of the two games is that the 3DS game completely eliminates the classic LEGO game stages. Rather than have you enter into separate levels with individual goals like filling a stud meter and finding secret pieces of a police badge, everything takes place in the open world. I’m okay with this idea, but the objectives in The Chase Begins are usually very close to the previous mission so it’s easy to ignore most of the city and just proceed straight through the campaign. I really felt like the game was holding my hand and leading me to the next objective where I would usually take part in mind-numbingly easy fisticuffs or solve simple puzzles by switching between the different job-type abilities that Chase acquires. These professions are the same ones that were in the Wii U game so you get to play as astronauts, farmers, firemen and other jobs kids want to grow up to do. The platforming is toned down, so the abilities that the characters have are cut back. For instance, double jumps have been eliminated and replaced by the astronaut auto-flying to elevated platforms. Aside from the main campaign, a lot of the little quests like collecting pigs with the farmer or rescuing cats as the fireman are scattered around the world if you get really into collecting everything.

Although inherently charming, there aren’t many parody moments to carry the humor, so the delivery is somewhat drier than what I’ve come to expect in LEGO games. Oddly enough, I didn’t feel this way about the Wii U title, which seemed cheeky and referential to pop culture. The characters are sometimes voiced, but the majority of the dialogue is delivered through text and the story doesn’t seem all that necessary to compliment the console’s tale. It just fits in line with the overall takeaway I got from The Chase Begins. It isn’t a bad game by any means. In fact, there’s a lot here that will likely keep kids entertained for hours and hours.  But for those hoping to get a 3DS game that captures the same quality and content as the Wii U version, this comes off as a watered down version. I think players of all ages are much more likely to be happy with what LEGO City offers on the home console, while this portable game will merely be an adequate diversion for the younger crowd.

AIMIT web solution is a best web design company in Chennai and it is a congregation of professionals with skills in the various techniques and technologies related to website design and development.

3/5
Fair
Review Notes
LEGO City Undercover: The Chase Begins was provided for review by Nintendo. I finished the main campaign in seven hours and played an additional two hours to see some of the peripheral content. I played the downloadable version of the game, but it is also available at retail. LEGO City Undercover: The Chase Begins is available exclusively on the Nintendo 3DS.
3DS 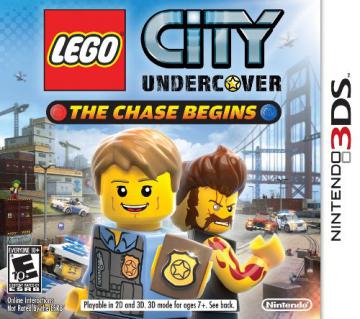