Gears of War has been a flagship franchise for the Xbox 360, with each release receiving marketing blitzes that engrained Emergence Day and Tears for Fears cover-songs into gaming culture. But the release of Judgment doesn’t seem to have that same must-experience type of atmosphere surrounding it. Maybe that’s because Epic has shared development duties with People Can Fly, maybe it’s because the title doesn’t have a number following it, or maybe it’s because it’s a spring release in the looming shadows of a wave of new consoles. Should any of these reasons make you wary of taking on the Locust one last time - this generation? 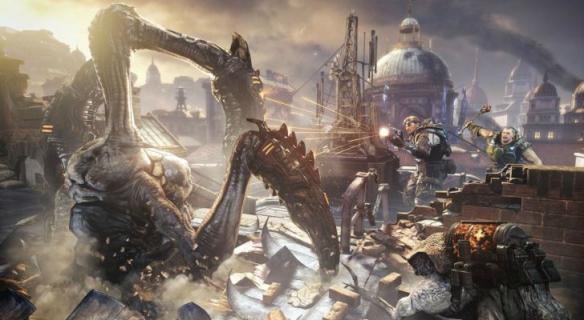 ​To begin with, I’m a fan of People Can Fly and the work that they did on their previous title, Bulletstorm. They know how to make fun shooters and the shooting mechanics have always been the foundation for what makes Gears games great. Judgment sticks very closely to the established formula. A couple buttons have been remapped (switching weapons is now “Y” and grenades are now “LB”), but it’s still the same “cover-based, shoot-things until their insides explode into meat chunks or shoot them until they fall down and then go make their insides explode into meat chunks with your big beefy arms”-athon. In short, putting rounds and rounds of bullets into bug-based humanoids is still both exhilarating and cathartic. When a game continues to make reloading entertaining after six and a half years, it’s clear that the combat is still strong.

Although the warfare feels like past Gears of War games, People Can Fly has gone with a much different story structure than the way the bromance of Marcus and Dom played out. A prequel to the first Gears, Judgment unfolds as each member of Baird’s Kilo Squad gives their testimony of the game’s events in a military trial. As each of the four characters has a turn to speak, you flashback to those events and play as that squad mate. Gameplay isn’t affected by whether you are playing as Cole, Baird, or newcomers Sofia and Paduk, so the swapping of controllable character is strictly a story-telling mechanic. So far, this may sound pretty similar to the Gears you know, but the chapters in Judgment are split into small, almost arcade type segments. In each of these sections you are scored and given one to three stars based upon factors such as headshots, executions, and earning ribbons for performing skilled kills like taking out multiple enemies with a grenade. Additionally, at the start at each section you are given the choice to “Declassify”. Accepting this challenge will add constraints to the mission to make it more difficult. For example, you may have to fight through environmental changes like fog or poisonous gas or you may be limited to only using pistols or shotguns. More straight-forward remixes of levels can add more difficult enemy types or simply put a time limit on the proceedings. Declassifying is an interesting attempt to make the levels fresh, and along with the randomness that enemies can be introduced to levels on subsequent playthroughs, it’s clear that this is a game that is meant to be played through multiple times. I essentially chose to Declassify every section of the game because it makes getting stars easier, but I usually skipped the time-oriented ones because I don’t enjoy failing four and a half minute restrictions on levels I’m seeing for the first time.

This emphasis on skilled scoring is an easy reminder of the developer’s background with Bulletstorm, and it makes sense in Gears as well. But for fans of the cinematic aspects that this franchise has previously provided, I just think the story and tone of the game suffers for these design choices. Although there is an over-arching plot, it’s easy to start feeling like you are just going through a series of challenge rooms. There are actually points in the game where you play Horde-style missions where the number of enemy waves that need to be defeated comes up on the screen and a countdown begins for you to set up defenses. Things like that combined with suddenly being challenged to use weapons you weren’t actually carrying in the game and then popping out to results screens every few minutes really yanked me away from any kind of cohesive plot. I’m not saying that the game isn’t fun, and it probably shines in multiplayer co-op, but it’s not a good step for a series that got progressively better in the story-telling department.
To further highlight this discrepancy is the inclusion of second smaller campaign in Judgment entitled Aftermath. The option to play this story unlocks once you’ve accumulated enough stars, and this hour and fifteen minute long affair delves into what Baird, Cole, and Carmine were up to during the later events of Gears of War 3. Almost immediately, I could tell that Aftermath was developed by Epic and not by People Can Fly. It’s structured like a traditional Gears game and suddenly I was thrust back into tension filled moments that propelled me forward at a much more frantic pace. To say it simply, Aftermath feels both more Epic and more epic. The dialogue between characters is more interesting and there’s a more noticeable musical score that enhances the atmosphere. A certain level of absurdity that accompanies Gears set pieces is here that makes the lack of them in Judgment’s campaign disappointing. And, unless my eyes deceive me, Aftermath is slightly more visually striking than the primary campaign. Aftermath doesn’t exactly conclude with a bang as it’s supplemental to Gears of Wars 3’s finale, but it is well worth a play through and served as a reminder to me of just how much I enjoyed the last game.
As far as the multiplayer offerings go, the biggest addition is the new Overrun game type. This introduces class-based mechanics and objective-based rounds of capturing and defending in tug-of-war style maps. Introducing classes to Gears is clever given the various types of Locust and COGs that exist and I liked experimenting with the different powers each came with in the brief time I spent with it. Other modes include Free-For All, Team Death Match, Domination, Execution (coming soon through free DLC), and the cooperative Survival. Honestly, I’m not a big multiplayer Gears guy, so I’ll leave it up to others to say whether these modes will cater to the competitive crowd. 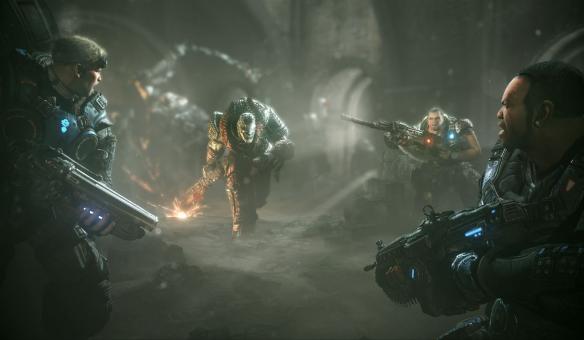 As a swan song for the series on Xbox 360, Gears of War: Judgment is not just a cash-in on the franchise name and it’s still a top of the line third-person shooter. That being said, this package is a strange collection of ideas in the Gears universe. The segmented, skill-based scoring found in the main campaign is full of unique ways to use the established gameplay. Those looking for a narrative, cinematic approach will likely be excited by Aftermath, but disappointed by its short duration. The new class-based twist on multiplayer has potential for those who’ve wanted more strategy in online matches and just in case Judgment wasn’t a weird enough product, a downloadable copy of the original Gears of War is included as well. It may feel like this is just a bunch of Gears related stuff thrown at a wall to see what would stick, but like the globby insides of a Locust, it satisfyingly splatters not only across the wall, but the floor, ceiling, and any nearby waist-high concrete abutments.

Watched my buddy play this for a couple hours. Graphics were intense.

Loved the graphics and gameplay!

4/5
Very Good
Review Notes
Gears of War Judgment was provided for review by Microsoft. I completed the Judgment campaign and Aftermath in about nine hours on the normal difficulty. I played another two hours of the multiplayer. Yes, I know that version of Mad World was originally from Donnie Darko. Gears of War Judgment is an Xbox 360 exclusive.
360

About Gears of War: Judgment 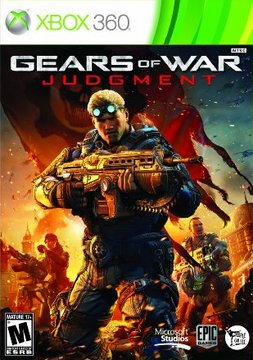