I’m ashamed to say that I never got around to playing the first Darksiders. I have no excuses. It’s been sitting there on the shelf for years and for whatever reason I’ve never played it… even though it’s always sounded like a game I’d greatly enjoy. I even told myself I’d get to it this summer in preparation for the release of Darksiders II. It didn’t happen. I’m confessing all this so you will know that I’m coming into the series fresh. That said, is Darksiders II a good place to mount up for newcomers to the apocalypse?

I can safely say that players who never found time for the first game will have no trouble jumping directly into Darksiders II. The game quickly gets you up to speed on what transpired with the Horseman War in the first game and introduces you to the new protagonist, Death. I never felt like I was missing any vital info and the game is incredibly welcoming to those new to the series. That’s certainly in no small part due to Darksiders II being one of the best conglomerations of other games I have ever played. It’s as if it was designed by a seven year old… and I mean that in the best way possible. This is the type of game I sketched up when I was a kid thinking about how great it would be if all the best elements of my favorite games were combined into one. Let’s see… take the overall structure of Ocarina of Time, insert God of War-style combat, don’t forget to add loot and leveling from Diablo, and make traversing the ruinous environments reminiscent of Prince of Persia. Oh yeah, and Portal… let’s throw a dash of Portal in there too. Darksiders II was born from these ideas and it somehow makes all those concepts gel into an experience that feels both like a modern game and like a throwback to games from a decade ago. 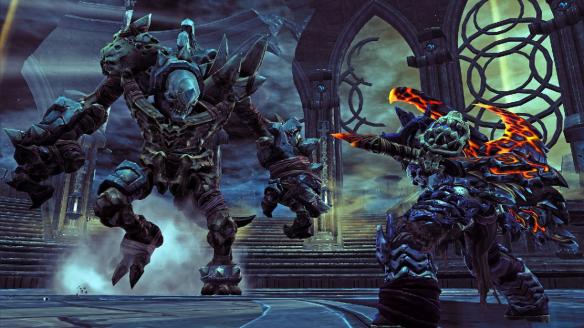 As a loot-lover, I came into Darksiders II completely unaware that such an economy even existed in the game. This isn’t just some half-hearted system, either. There is all manner of unique gear popping out of enemies, springing from chests, and given as rewards for quests. That includes new scythes, secondary weapons, and plenty of armor that not only has elemental effects, but also changes the look of Death. (In particular, I liked garbing him in purple and pretending that I was playing the game as Skeletor.) In addition to having different levels of rarity, there are also special possessed weapons that allow for customization by feeding them gear you no longer want. It’s a simple crafting system, but creating personal weapons based upon the attributes of your existing inventory adds a nice touch of depth.

With such an emphasis placed on loot it shouldn’t come as a surprise that a standard leveling up system is in place with XP gained from killing baddies and completing quests. There are also two skill trees to allocate points into as you can steer Death towards becoming a powerful Harbinger, a summoning Necromancer, or a combination of the two. I went with an all-out Harbinger build, and the powers you get fill the screen with vibrant slashes that really highlight Darksiders II being a great looking game. It also doesn’t hurt that the combat is really fast, fluid and easy to string together combos. Eviscerating baddies is as simple as two attack buttons for the most part (one for your scythes and one for your secondary weapon), but mixing up the timing and throwing in Death’s various powers and evasion techniques keep combat exciting throughout a lengthy campaign. The variety of the alternate weapons aids in this immensely as you can equip anything from agile claws to slow, but powerful hammers. Another big factor in battles never becoming tiresome is that there’s excellent pacing between fighting, exploring, and puzzle solving.
The sense of scale in Darksiders II is fantastic. The overworld is sprawling, but densely populated with little side excursions and secrets to search out. Treasures are smartly tucked away, and chests are often barely out of your reach. This is usually because you haven’t yet acquired whatever ability allows you to progress through that section. (Yes, let’s throw a bit of Metroid into this game as well. Why not?) By progressing through the main campaign, Death acquires new skills such as a hookshot-esque grappling arm, the ability to create portals, and the capacity to split himself in two. All of these are of course handy in both general exploration and in conquering the dungeons in Darksiders II. These decaying mazes provide the right amount of challenge, straddling the line between being cakewalks and being MENSA caliber. There are some really smart environmental puzzles… the type where you’ll feel good about yourself for having worked through them, yet very seldom become frustrating. It helps that Death has a pet crow that can be summoned to point him in the general direction that he needs to head next while never making you feel like a dummy. I really only got lost in one dungeon and that was because I didn’t realize I was just supposed to fast-travel out of the area once I’d gotten what I’d come for. Aside from that brief “now what am I supposed to do?” moment, the only thing I found off-putting was the slight lag in the climbing/jumping mechanics. While generally acceptable, some of the sections where you have to out race rising lava can be unnecessarily rage-worthy as you accidentally leap in the wrong direction and into a really warm bath.
With doing so many things right, the primary thing that Darksiders II stumbles over is the storytelling. With the game’s open structure and lengthy dungeons, it’s easy to forget exactly what the motivations are since Death goes long periods without interacting with anyone. You do get a brief recap of your story progress every time you start up the game, but it could have added more character if Death had more frequent conversations or perhaps even a fairy-type sidekick that was along for the ride. The story itself is still fairly good, but it falls flatter than the scope of the game and leaves many questions unanswered for a sequel. I also came across a few glitches which have become common-place for a game of this scale. During my twenty-eight hours of playtime, the game completely froze up on me three times and there was a brief section where the audio was not playing any sound effects or dialogue. The latter of which was kind of disappointing since it happened during an in-game cutscene, but I’m pretty sure the gist of the conversation was that the angel lady wanted me to kill all the creatures that were trying to kill me. I went with that approach and the game continued.
Even with a storytelling that could be bumped up a notch, Darksiders II is still one of my favorite games of 2012. There is just so much to do and explore with plenty of reasons to go back to areas once you’ve unlocked new skills. Heck, I’m still missing two abilities and I’ve finished the main campaign. There’re just so many side quests I haven’t gotten to yet, more secrets to find, an arena mode to conquer, and a New Game+ that carries over your character. Don’t make the same mistake I made with the first game – Darksiders II is massive and should not be missed.

5/5
Outstanding
Review Notes
Darksiders II was provided for review by THQ. I finished the campaign in twenty-eight hours accumulating 34 out of 50 Achievements for 560 GamerScore. Darksiders II is also available for PlayStation 3 and PC.
360 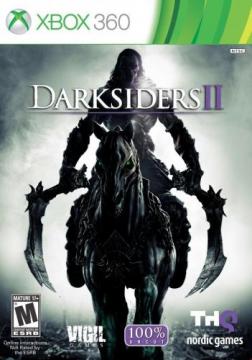