The Last of Us Review

With the Uncharted series, Naughty Dog created one of the most popular and critically acclaimed franchises of this generation and it could be argued that Nathan Drake is the face of the PlayStation 3. Rather than send Drake out on another expedition, the studio decided to branch out in a much darker direction with The Last of Us. Set in a zombie-devastated United States, the game chronicles a gruff man named Joel and the fourteen-year old girl, Ellie, with whom he’s been entrusted. Sounds pretty bleak, but who’s ready to be depressed?

The apocalyptic story of The Last of Us is not an unfamiliar one. There’s been at least one or two (hundred) games this generation that have dealt with zombies. But what sets Naughty Dog apart is that they understand how to tell a story better than what we are used to being okay with in videogames. From the enthralling opening moments, there is a maturity to the storytelling because of the depth of it’s characters. Through some of the best written and acted dialogue ever crafted into a game, you learn about Joel and Ellie as you go - their motivations, their histories, so that eventually you can actually relate to them. They aren’t stereotypical characters that are easily defined, and the same care goes into the supporting cast that you interact with in the journey across the battered country. This journey has an almost episodic nature to the story pacing as the seasons turn and the duo travels between towns. It’s the type of thing that invites comparisons to Telltale’s The Walking Dead series, and both games excel in delivering completely engrossing stories that just happen to take place amongst the undead.

When it comes to actually playing the game, though, I was less engrossed. I seldom enjoy stealth in videogames, and The Last of Us relies heavily on being discreet, which to be fair would be pretty essential in a true zombie apocalypse. However, while the storytelling pushes the limit of modern gaming, the stealth mechanics actually feel familiar, basic, and dated. Enemies walk about on patrols, Joel uses his unexplained super-hearing to visually show where the lurkers are, and then you try to either sneak up behind and choke out them out or avoid them altogether. Joel can also toss bricks and bottles he finds to distract the Infected or human combatants, but that’s about as deep as the stealth goes. This type of gameplay isn’t what I particularly enjoy in games and this is often because it leads to repeatedly playing sections over and over again if you fail. This is even more frustrating in The Last of Us as the enemies’ awareness of you is often unpredictable. I often would be spotted while hiding motionless behind something, and other times would clumsily happen upon an enemy that had no clue I was there. Usually the former of those situations occurred, though, and I decided to switch the game to the easy difficulty about three hours in because I just wasn’t having any fun being mobbed by the same Infected again and again.

Once I switched the difficulty, being able to experience the story was definitely more accommodating, but I still did not find myself loving the combat portions of the game even when they opened up to allow for more firefights. The shooting mechanics are fine as they closely mimic those in Uncharted, but the game’s encounters are very repetitive. Most areas have you sneaking into a building, performing an action, and then blasting through large groups of baddies as you escape the structure. This type of thing should be exhilarating, but I found myself dreading every encounter in a way I don’t think was intended. Dealing with enemies was just a necessary evil so I could just get back to the next story-driven part of the game.

Traversing locales in The Last of Us is also tedious, which is primarily due to the lack of verticality in the environments. Joel isn’t much of climber or a jumper and his athletic prowess is akin to that of a moderately fit middle-aged man. He can climb chest-high ledges, but anything higher generally requires finding and positioning a ladder - which is the game’s primary puzzle-solving element. Adding this kind of realism to a game can help to set the tone, but it can also overshadow the enjoyable experience of actually playing a game.

There was a lot of work put into making the environments in The Last of Us look richly detailed and often times upon entering a new area, the game will show off the sense of scope by panning to your objective off in the distance. For instance, the Pittsburgh portion of the game presents a bridge on the horizon that Joel and Ellie must reach to escape the city. Naughty Dog often used this technique in the Uncharted series as well, but in Uncharted that was implemented to show you how exciting an adventure it was going to be to leap and swing and shimmy and explore. In The Last of Us, showing the distance to the objective is just a harsh reminder of how many streets and crumbling building interiors I have to walk through to get there. Nobody wants to walk through Pittsburgh for that long. Sure there are collectables to find in the way of crafting items and bullets, but other than the humorous way in which Joel crazily flails as he snatches at items, I didn’t get much thrill in searching the environments. On occasion, there are artifacts left by other characters in the world such as diary entries that help to flesh out the side-stories and those add to the richness of the overall tale. It’s just a shame that searching these out feels so mundane and I stopped caring about going out of my way to find them in the later portions of the game. 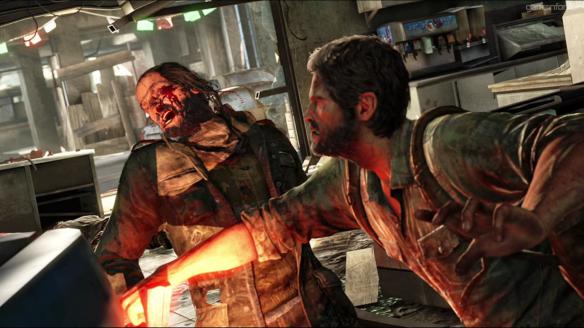 With all the game mechanics working against my sensibilities, you may think that I wouldn’t recommend The Last of Us, but that’s not the case. I know some people will have the same issues I have with how the game is structured around stealth and minimizes exploration and puzzle-solving. Others who enjoy stealth will think that I’m insane and praise the game to the highest degree and that’s fine too. What I think everyone needs to experience, however, is the level of character development through storytelling that Naughty Dog has created. The likes of Joel and Ellie don’t exist in videogames often and it would be a shame if you didn’t take the time to get to know them.

I would give it a 5/5, Amazing experience from beginning to end. I loved the stealth segments and I enjoyed that there were no fail states if you effed up. You can kill everyone if you want.

The multiplayer is pretty fun as well. Kind of gears of war esque, while it still maintains some stealth and survival aspects.

After listening to you on the podcast, I'm honestly surprised to see you gave it a good score. I agree on the score and the recommended buy price, outside of the fact I bought it launch day because I want to support Naughty Dog for providing these stories and characters I love.

Superlative presentation covering up for lackluster game design? So... A Naughty Dog game then. Gotcha.

Jun 24 2013 09:48 PM
4/5 for me.. Too glitchy. I've been trapped in mid-air and fallen a foot to my death, the game failed to load a sequence forcing me to restart, game hard locked on me, health and oxygen meters disappeared.

I decided to switch the game to the easy difficulty about three hours in because I just wasn’t having any fun being mobbed by the same Infected again and again.

This... I wish I had done this.  I think your 4/5 score is generous honestly.  Loved the story hated pretty much every single thing else.

Jun 24 2013 09:57 PM
I'm enjoying the storytelling and the "experience" but something just feels off. It's like it just misses on the stressful/fun point, but the presentation is amazing.

Good thing Uncharted 3 was only so-so, that means ps4 Uncharted 4 will break the streak.

4/5
Very Good
Review Notes
The Last of Us was rented from RedBox for review. I completed the game in twelve hours and accumulated 2 Trophies. (Yes, the game is extremely protective of its Trophies.) The Last of Us also has multiplayer, but I didn't try it. The Last of Us is exclusive to the PlayStation 3.
PS3

About The Last of Us 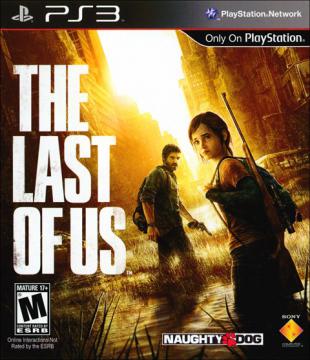