From the humble beginnings of being a Grand Theft Auto clone, each successive release in the Saints Row franchise has since differentiated itself by expanding on the sandbox formula and pushing the envelope with its over-the-top style.  With Saints Row IV, developer Volition adds another open-world franchise, Crackdown, to the mix and in doing so creates a superhero powered mash-up of a game.  Was Volition able to handle this great responsibility, or did the power go right to their ridiculously over-sized Johnny Gat heads? 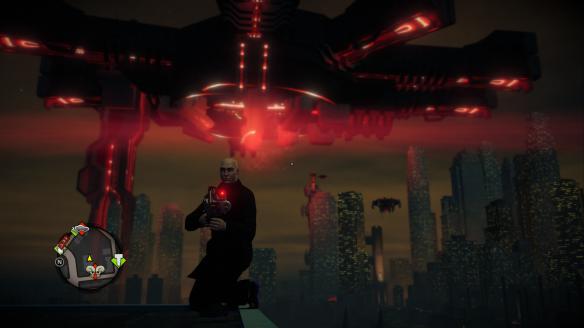 The player takes the role of the “Boss” of the Third Street Saints gang, who at this point, is so incredibly well-loved, he has also managed to land the US Presidency.  One of the major issues (ok, THE major issue) of your presidency is an alien invasion, and the future of Earth hangs in the balance. 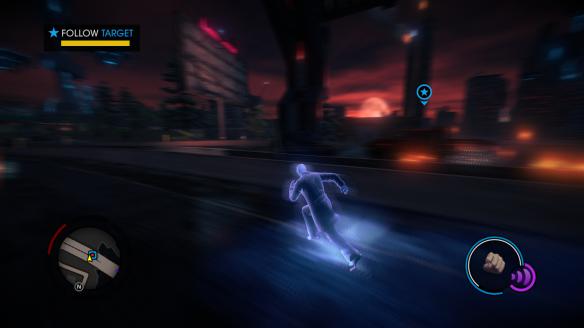 This is a lot faster than driving.  It also looks a lot cooler.

The major change in Saints Row IV is the introduction of super powers, which greatly change how the player traverses the city and dispatches enemies.  As mentioned earlier, SRIV borrows heavily from the Crackdown series, 3rd person action games where a super-powered hero jumps and glides through an open city.  The good news is that Volition has done a great job of making the super-powered Boss fun to control.  As the player upgrades his powers by collecting Orbs, Data Clusters, the Boss is able to run at super speed, leap over skyscrapers and glide across the city with ease.  It’s a great feeling to soar above the buildings, with the appropriate city sounds heard off in the distance below.  Running at super-speed through traffic is also a (literal) blast and using these new transit superpowers to collect more Data Clusters is, at the very least, as addictive as it was in Crackdown.  Player movement reminded me a lot of The Incredible Hulk: Ultimate Destruction, which is also a good thing. 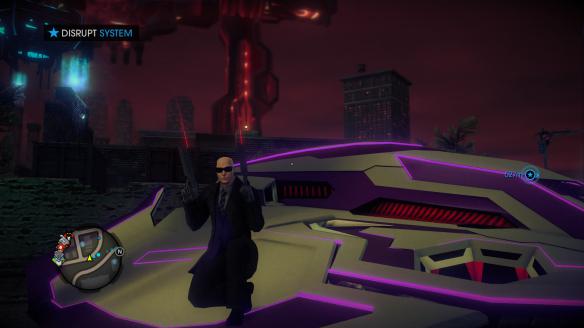 The UFO is OK, but where is my super car that turns into a robot?

As a big fan of the previous Saints Row games, one of my favorite features is collecting and upgrading cars found around town.  While the great customization options return once again, I hardly spent any time with them during my 20 hour playthrough of Saints Row IV.  Driving a car is simply not as fun or efficient a method of transportation as Flash-style sprinting paired with Hulk-esque power jumps.  Maybe that’s a knock against the vehicle choices or a compliment for the new super-powers; probably a combination of both.  When I did drive a vehicle, I found it was because I was forced to do so in a mission or I wanted to save a little bit of cross-town travel time by flying the UFO. 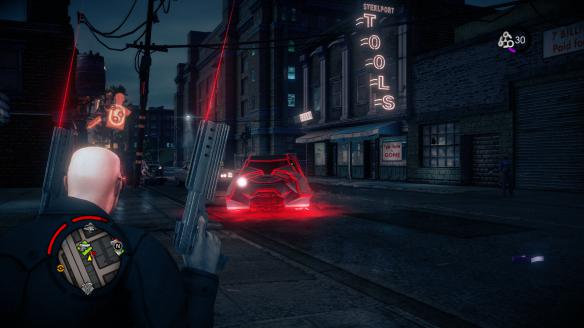 Sorry, I had to show you the Robocop gun(s).

The Boss also gains offensive powers, including Telekinesis, Fire & Ice Blasts and Super Stomps. Like his movement-based powers, these are also great fun to use.  Combined with a crazy assortment of customizable and upgradable alien and human weapons, there is no shortage of cool ways to kick-ass.  I don’t want to ruin the surprises, but I will tell you that Robocop’s Auto-9 guns (dual-wielded, of course) were my go-to weapons.  My only complaint here is I wish large objects responded like they had more weight.  Tossing cars and living things around with Telekinesis is great, but would be made even better with a more impactful physics system. 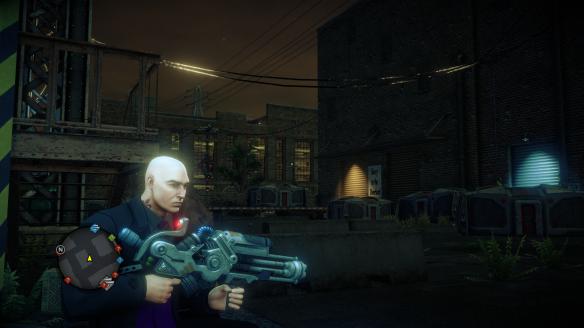 Mrs. Cheapy spent an hour staring at my face so this could happen.

Along with the solid implementation of super-powers, Saints Row IV’s other big strength is they way it spoofs and references other video games and movies.  I encountered plenty of laugh out loud moments, which for me, are pretty rare occurrences in most games.  The writing is funny and clever; poking fun of itself and other games and movies. Hopefully players can experience the game without having too many of the jokes and surprises spoiled for them. However, and this may sound strange knowing what you know about the game, but somehow SRIV doesn’t seem as shocking or over-the-top as previous installments.  This isn’t a complaint, just something I noticed and could be because this is our 4th go-round with the Saints. 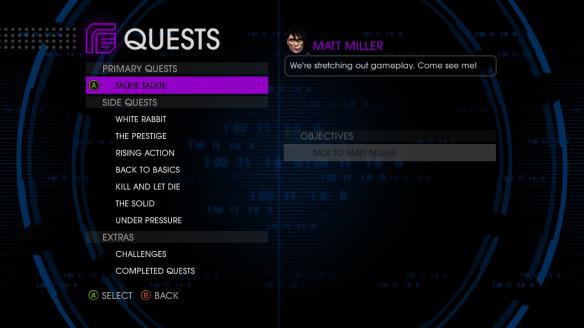 It would be funnier if it wasn't true.

While there is a lot of fun to be had in Saints Row IV, I found some of my enjoyment starting to wane around the 10 hour mark.  This is mostly due to some of the missions being not much more than a few Activities (mini-games/side missions) grouped together.  The Activities are decent, and there are many new ones too, but more often than not I just felt like I was killing time playing mini-games, rather than performing godly tasks worthy of an all-powerful being. This lack of variety in the main missions is definitely a shortcoming.  Activities are implemented so that you can even start playing new ones while already in the middle of missions made up of Activities. Yup, Activities make up a big chunk of the gameplay.  I think this is likely to be the biggest complaint with Saints Row IV. 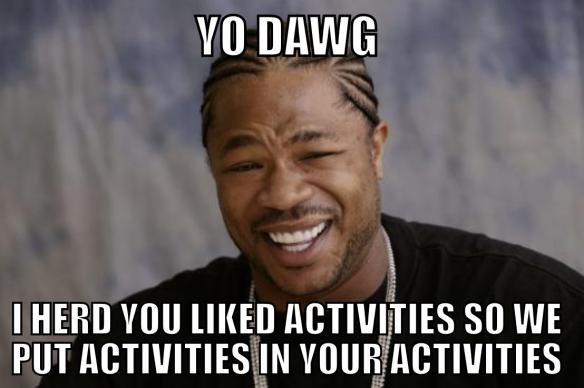 Just to be consistent, I put some text here, dawg

Despite the excellent, game-changing superpower additions, it often feels like shortcuts were taken during the development process.  I ran into some pretty interesting glitches, including one that completely disabled my Blast Power Set during the last couple of missions.  I also had the game lock up on me several times.  During one mission, the game would lock up on me at the same spot each time.  I was only able to proceed by playing through a different mission first, and then returning to the problem spot.  Oddly enough, I only encountered these major issues in the last hour or two of the game.

The game looks and sounds pretty good on PC, but the game engine is definitely looking a bit too familiar at this point.  I also think the lack of a true day/night cycle also detracts from the visual appeal of the game; it’s got more of a dusk/night cycle, and I found myself missing sunny skies. As usual for the series, the voice acting is top notch and the radio selections are enjoyable, but I personally enjoyed the songs from the last game more. The original score was a pleasant surprise, adding tension and excitement to the end-game. Volition did a very good job on creating an enjoyable Saints Row game that plays quite differently from from its predecessor, released just 1.5 years ago. Perhaps having the Boss in a more traditional superhero role, rather than a “Matrix hero” could have presented additional opportunities for customization (superhero HQ, vehicles, symbols, etc) and more unique mission types.  More choices of superpowers, allowing players to create unique heroes would have been appreciated as well.  As is, there’s lots of fun to be had, but the combination of sequel and Activity fatigue keeps Saints Row IV from being The One.

The PC version is 49.99. That's probably what Cheapy played.

Thanks for the review, I got my copy pre-ordered and I will probably keep it since I really enjoy the series and plan on playing through in co-op with my friend. Wonder how the technical side of stuff holds up on the 360 version, either way it sounds like I will still enjoy it at least!

Very much looking forward to this. Made sure I played through the other three games just to get an appreciation for how the series has progressed, and to get the story, what there is of it.

Good review Cheapy, I can't kick the feeling this is DLC expanded out to a full priced game.

If an SR super-fan like you is gettign bored after 10 hours that worries me.

I think I'll cancel my pre-order and wait for $20 on this one.

The "major issues" part sound like they are PC related. Hope it plays better on 360.


Nope, it's still in rotation.

I'm hoping for a next gen version coming because I don't have a powerful PC and I heard console versions have a performance issue.

The "major issues" part sound like they are PC related. Hope it plays better on 360.

According the Giant Bomb, the 360 version is pretty bad performance wise. Lots of frame rate issues and hitches. Anyway, if you check around the trading forums the PC version can be had for as little as $35 or $40 from GMG if you prefer that route.

4/5
Very Good
Review Notes
The PC version of Saints Row IV was provided for review by Deep Silver. I completed the single player campaign (which can also be played in Co-op) in 29 hours, unlocking 47% of whatever Steam calls Achievements. Oh, it’s also called Achievements on Steam. Saints Row IV is also available for the PlayStation 3 and Xbox 360, but I’m pretty sure it’s best on PC, except maybe for the crashing parts.
PC 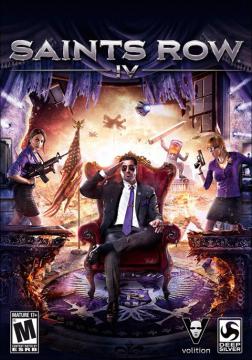