Any decent retro/vintage/independent Video game stores in and around Boston worth checking out?

I've got a cousin going up there and wanted him to do some scouting around for me.

Figured you CAGs would be able to help him out.

There is Sudden Impact in Winthrop,MA. Dom is the owner he's a pretty nice guy to deal with give's a lot in store credit compared to other's and he carries a ton of retro stuff. I need to hit the place one more time before winter comes, I sill have over $200 in store credit i need to use up.

There is also Game Underground in on Route 9 in Framingham, MA.  Cool little place.

I like Game Underground personally.  They have a good selection of older games and systems.

Have any new places opened the last year or so? There use to be lots of fighting on craigslist between the stores that was pretty fun to watch.

I think I will have to check out Game Underground in Framingham. According to their site they have some arcade machines there. To get me to go to a retro store they need to have something to hook me. 99% of retro stores have bad prices, so they need something to get me in there. There was one down in Warwick that was pretty cool looking about 2 years ago, but it never seemed to get going and closed up shop.

A few machines set up (pay machines are fine) would be enough to get me to go somewhere pretty regularly just to check out stuff and drop some money in the machines. Especially since Good Times and Tokyo Game Action are long long gone and sadly the drive to Funspot is just so long.

As for Sudden Impact - in my opinion it is okay or meh. It suffers from the same problems a lot of the stores do, there is just tons of junk everywhere (and no space). Tubs full of systems, etc. You can't even walk around the place. I also don't think the guy really knows much about games (I'm sure he's learned a bit by selling them now) because his ads use to always read like someone just reading off titles. I gots all the marios, final fantasies, zeldas, earthbounds, etc. Also toss in all the other stuff and just becomes like a junk store - zuzu pets, silly bands, etc.

I haven't been in there for a year since I moved out of town though - so my review is a little dated. I actually thought he might've been gone because I didn't see them at Anime Boston this year, but they were at PAX.

Sudden Impact has been in business for over 6 years. People frequent the store from all over the world. Check out the stores facebook page regarding all the places folks travel from to visit! The best testament to a store front is repeat business,and Sudden Impact has a huge and loyal following of people who know a LOT about gaming.

Dokstarr,I find your comments pathetic,untrue and insulting.I gots all the marios and junk store??? The guy doesnt know much about games?Tons of junk everywhere?

check us out at  http://www.suddenimp...comcastbiz.net/

At this time I would like to thank everyone who frequents the store and our booth at Pax East every year. And Many thanx to all the educated gamers who make Sudden Impact a regular stop on thier hunt for Retro greatness!

I never saw you responded, but I might as well since you called me out.

I stick by my comments and thoughts from before. Your ads read like someone just grabbing at everying,

Earthbounds, zombies, chrono triggers, ocarina of time water bottles mario and peach, etc. When someone just spills out dozens and dozens of things it sounds to me like you are digging through a box listing everything you can pull out of it.

And that is just about 1/4th of the ad. The whole thing reads that way.

I remember before you use to mention how you had silly bands and zhu zhu pets. You add the silly bands in and it just looks like a store where you will grab a little of everything.

Also you slap PAX East on everything. Your business card, the outside of your store, the inside of your store, etc. As far as I can tell you just pay for a table. Maybe you are personal friends with Gabe and Tycho, but I would think they would give you much bigger billing then just your one table then.

I'd also recommend maybe chaning some of your signs. Pretty much all the signs for your store (out front, inside, at PAX, etc.) are just a bunch of stolen Nintendo images photoshopped ontop of or next to each other. I'd think you'd probably be able to get someone to make some of your own signs/symbols/logos for business cards, banners, etc. I bet some of the online comic artists or video game fan-artists from deviant art would be up for it.

And I stated before, I haven't stopped in for a few years, but looking at the pics on Craigslist it looks like your place is still very very crowded and there is absolutely no where to walk around. Systems, games, plushes, homemade clock, gutted systems converted into clocks, etc. everywhere. Maybe it would be best to store some of your inventory home? Do you need dozens of same items in cases or inside wire shelving units? It just screams flea market.

If you posted the pictures of your store in here I'm sure that people would agree that it is at least "very cluttered".

If you are really doing so well maybe a bigger location? That yogurt place just opened in Michael's Mall recently and there is the karate place that just moved to the other side. You'd probably get even more foot traffic being closer to the school and Nick's. There isn't much in Winthrop these days so it is good to have something around. Pretty much filling the void of John's Dugout from 15 years ago. He sold Pokemon cards, furbies, wrestling figures, comics, etc.

I have nothing against your store. That is why I said it was okay. I Instead of a calling my statements pathetic maybe you should just take it as criticism and consider them in the future.

I went to Core Gaming in Salem, NH the other day and it was what you would expect from a retro store.  They had a nice variety of everything from the Atari to last gen games and systems.  They even had a complete Chronotrigger, but the price was $250.  Their pricing is pretty much in line with ebay pricing so you're not going to get any deals, but at least it's another option to check out if you're looking for something.

I saw a new store opened up in the natick mall where gamestop used to be.  Pretty high prices but im sure the rent is sky high as well. They had a decent selection but is clearly a low budget startup. They really need to adjust their prices to be competitive to underground gamer down the street.  It's cheaper to go upstairs to the remaining GS or even across the hall to Newbury comics to get a game, you dont even have to work for it.  Of course they have the retro games cornered in the mall if that what your looking for.

I saw a new store opened up in the natick mall where gamestop used to be.  Pretty high prices but im sure the rent is sky high as well. They had a decent selection but is clearly a low budget startup. They really need to adjust their prices to be competitive to underground gamer down the street.  It's cheaper to go upstairs to the remaining GS or even across the hall to Newbury comics to get a game, you dont even have to work for it.  Of course they have the retro games cornered in the mall if that what your looking for.

I never understood malls that have two GameStops. I'm guessing it is a throwback from Electronic Boutique or Babbages, but it always makes me laugh a little.

I may check it out and see what is up, though honestly I'm guessing it will be a disappointment.

I do what to go to Gaming Underground in Framingam. I've heard good things and they seem to have a few arcade machines there. That is the kind of hook that would need me to go to a store. 99% of the stores have the same piles of tons of Roger Clemens MVP Baseball, Mario/Duck Hunt and Festers Quest that every other store has. Even when they have something good it is way above eBay level.

Stores need either something truly rare/hard to find/one of a kind or a hook like arcade machines, console tournaments, somehing. If I just want to buy a video game I will go to eBay and pay much less, but for a fun way to kill an hour or two I'll pay up a bit. Once in a while I will take the drive up to Funspot just to get a day of Donkey Kong, Tetris and Pinball in.

This makes me miss Tokyo Game Action. Still a shame it washed away.

Even though this thread is nearly dead I thought I'd resurrect it for a second for Sudden Impact after he called me out a while ago.

God bless you sir for scalping all those Amiibos. Your hard work and dedication of cleaning out the local Targets and Best Buys allows all the "educated gamers" to pay you three times the retail price. You, sir, are truly an asset to the gaming community! 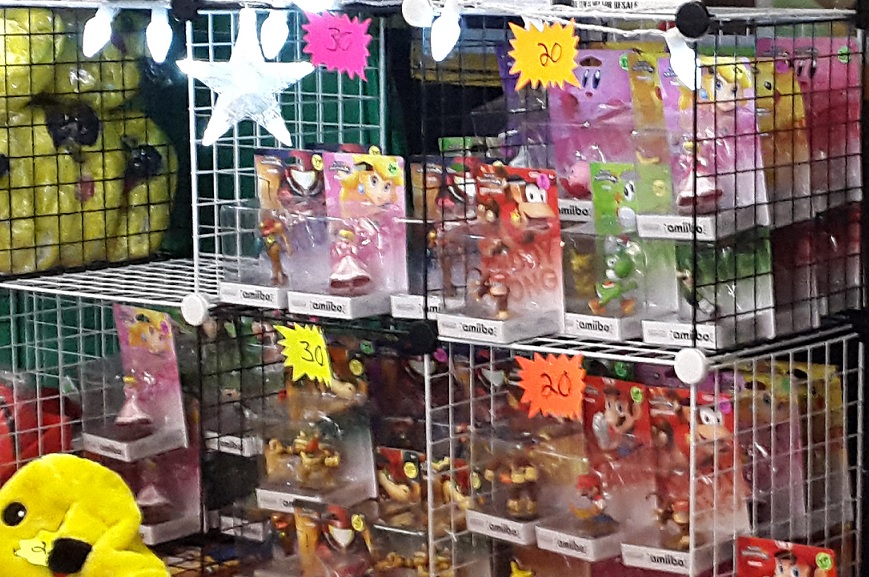 I knew there was a reason of why I stopped going to that store. Insane prices and poor trade value.

I've been to sudden impact once because I wanted to find some cool retro stuff until I found some of the most insane prices and a rediculous amount of clutter. I ended up not buying a single thing because I felt I was getting ripped off if I bought anything from that store.

Back to Northeast & Mid-Atlantic

Also tagged with one or more of these keywords: Boston, retro, vintage