Walmart YMMV In Store Clearance Thread I (READ THE FAQs)

Cheap Laptop? Im in dire need of one

No idea what he's talking about either.

Sent from my SM-G970U using Tapatalk

The R-rated movie trick was how some would get around Walmart’s system alerting the associate at the self-checkout station. As I recall, you took your three cent games to checkout, along with (at least) one other other that will certainly be flagged as needing an associate’s help: people reported being successful with things such as R-rated movies and beer (since they require proof the consumer is over 18). The trick was to scan the alerting item first: the associate would come over, verify the item and your age in the POS, and then allow you to proceed. At that point, you could scan the 3¢ games without fear of being stopped again (WM’s system apparently only required one “pass” to allow those alerting items to go through unmolested), and the transaction would end painlessly. Attempting to scan the $0.03 games first, or before another alerting item, would cause the associate to take a good long look at your receipt and wonder why your video game was ringing up for cheaper than a pack of gum in the 1950s. Of course, here in CA we couldn’t use alcohol since self-checkout won’t let you scan it, but most R-rated movies worked. I also heard guns, knives, other weapon-like items and essentially anything that required an ID like medicine would trigger the system, but I myself only ever tried movies. Anyone please feel free to correct me if I’m misremembering any of this!

Yep.  I just used R rated games like the Wolfenstein ones.

The laptop is an HP 14 inch that was Walmart's "Special Buy" exclusive model, but has been phased out. Most stores show it at 184.

What's wrong with buying a display model? Maybe they would take extra money off or give you a better warranty on it. Is it really that important that it comes in a box, as long as it actually works?

They don't sell the display model I believe.


I found it at my store for $124 . I don’t know much about comps but if I upgrade it like you say , will it run games smoothly ?

I found it at my store for $124 . I don’t know much about comps but if I upgrade it like you say , will it run games smoothly ?

It really depends on the game that you want to play, but most PC games have settings to run on the most garbage PCs from 15 years ago, to the top of the line PCs coming out in 2021. It's always a safe bet to have as much RAM as possible. RAM is like the brain of the PC.

It's always a safe bet to have as much RAM as possible. RAM is like the brain of the PC.


The CPU is the brain of PC. A better analogy for RAM is having a larger physical desktop area to lay out, organize and quickly access data for the CPU. Even the smartest person in the world would have a hard time organizing sheets of paper if they only had a desktop that was 2’ x 3’. If they have an area that was 6’ x 8’ they could work better.

That's why I said it's like a brain, and not that it was the brain.

My Walmart haul from yesterday: 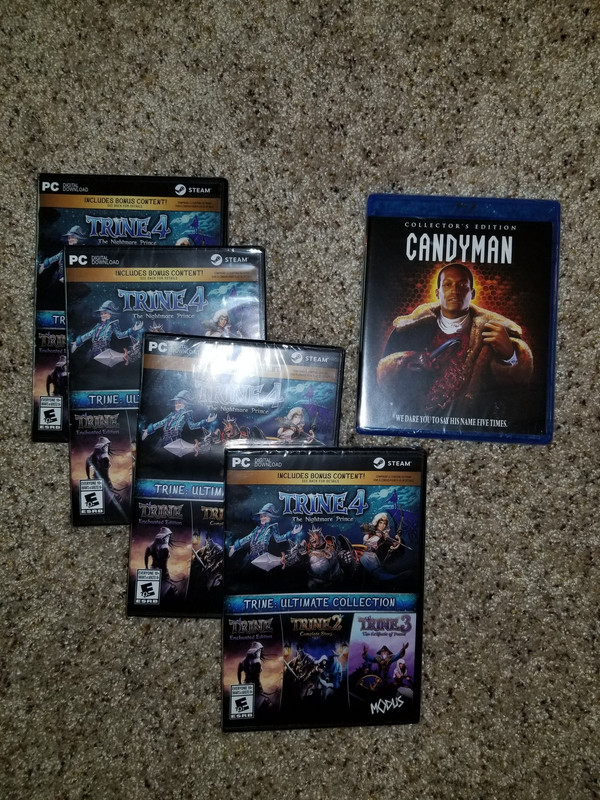 That's why I said it's like a brain, and not that it was the brain.

I'd say it's more like the stomach into which fuel is put. And the bigger it is the more it can accept at once for processing.

Thanks for posting the info, managed to nab a copy of Trine Collection and Farming Sim 17 for 3 cents each.

A couple of additional games I noticed at clearance prices (YMMV):

Most of the prices were updated and instead of being piled a messy clearance bin, the games were arranged neatly on a shelf near the laptops. A few of the games were not updated and just in the regular PC game section. I had no trouble checking out, although the cashier did do a double take when the games rang up as 3 cents.

Brickseek data is showing Guild Wars 2: Heart of Thorns available at a few stores around here but I've been to those recently and it's definitely nowhere to be found. I would have tried scanning it had I seen it at all. It's a wild goose chase for this area at least. Same for theHunter: Call of the Wild. I think I may have seen Titanfall at one store but I don't think it's worth it even at $3. Game has no single player campaign and online multiplayer is probably dead. The only one of these I really saw was Recore.

Super Lucky's Tale (PC) seems to be $7 at some stores.

I've always been shot down when asking about display models. Found a store once that had 4 gaming laptops on clearance, all with only display model available. Manager said not for sale. May have been at one point or may just depend on manager of dept. or store.

Whats the most ram you can stick in these things? I saw a video where a guy stuck another 4GB stick in and it improved framerate performance in the games he tried like 60%

My Walmart haul from yesterday:

I'd buy that for a dollar

Thanks for the info, amazingly I managed to find one locally.  Probably helped it was still marked at retail.  Appreciate it.

They had a couple of different headphones for $15

Got Fable Anniversary for $1.

A third party seller on walmart.com is selling their last copy for $10.99

While I was searching the UPC of elder scrolls on google  I stumbled upon someones store use google doc detailing their costs and retail prices. Just thought that was interesting.

Popped my $0.03 game cherry this morning. Thanks for the heads up, grabbed 2 copies of the Trine Collection for the spouse and I to play coop. It was on the shelf priced at $39 with and like all the other PC games but when I check the price on the app it was 3 cents.

What is the best way to look for this stuff when I am in the store? Are you folks shopping the app for in stock games and then checking the shelves? I never looked for anything other than clearance priced stickers before...

Popped my $0.03 game cherry this morning. Thanks for the heads up, grabbed 2 copies of the Trine Collection for the spouse and I to play coop. It was on the shelf priced at $39 with and like all the other PC games but when I check the price on the app it was 3 cents.
What is the best way to look for this stuff when I am in the store? Are you folks shopping the app for in stock games and then checking the shelves? I never looked for anything other than clearance priced stickers before...

Yeah, scan with the app. Or if you want to save time, take a bunch of photos of all of the games and search for them in Brickseek at home.

How is quantum break on pc? Is the steam game cross play on xbox?

What is consider the best forza in the series? Debating on horizon 4 or motorsport 7 or consider everyone else feedback. Looking for single player and co-op online/offline.

Anyone pick up extra copy star fox 64?
Got the trine pc game if anyone intrested.

I haven't played Motorsport series, but that looks to be more sim-y. Can anyone confirm or deny?

Horizon series is more like an arcade-y open-world racing game, like numerous NFS titles (NFS Most Wanted by Black Box, MW by Criterion, Carbon, etc) & TDU2. Haven't played FH4 yet, but Horizon 3 is great, so I'd expect more of the same from H4.

Quantum Break is also great, IMHO. Not sure if any updates changed things - but back when I bought it (for $10 from WalMart, a while ago), Steam-version was its own thing. As a fan of episodic TV and also Remedy-style shooters - yeah, it's awesome. Story's really damn good too. I wish the 20-30 minute episodes/videos were able to be watched offline though, as those are streamed via Steam.

Also seeing King K. Rool Amiibo at $4 at one store nearby. Only seems to be showing 1 on hand though. Probably will be nowhere to be found.

For anyone looking for that 14 inch HP laptop, Brickseek no longer lets you search for it as they basically say theyve seen wildly inaccurate information on inventory levels, which makes sense.