Don't know if I would call this a yardsale find, but it was definitely found near a yard. When I was visiting family today, I was informed that one of the neighbors was putting a bunch of stuff in front of their house for scrappers. I found this nice little set filled with vintage Kenner Star Wars figures, just sitting on the ground. 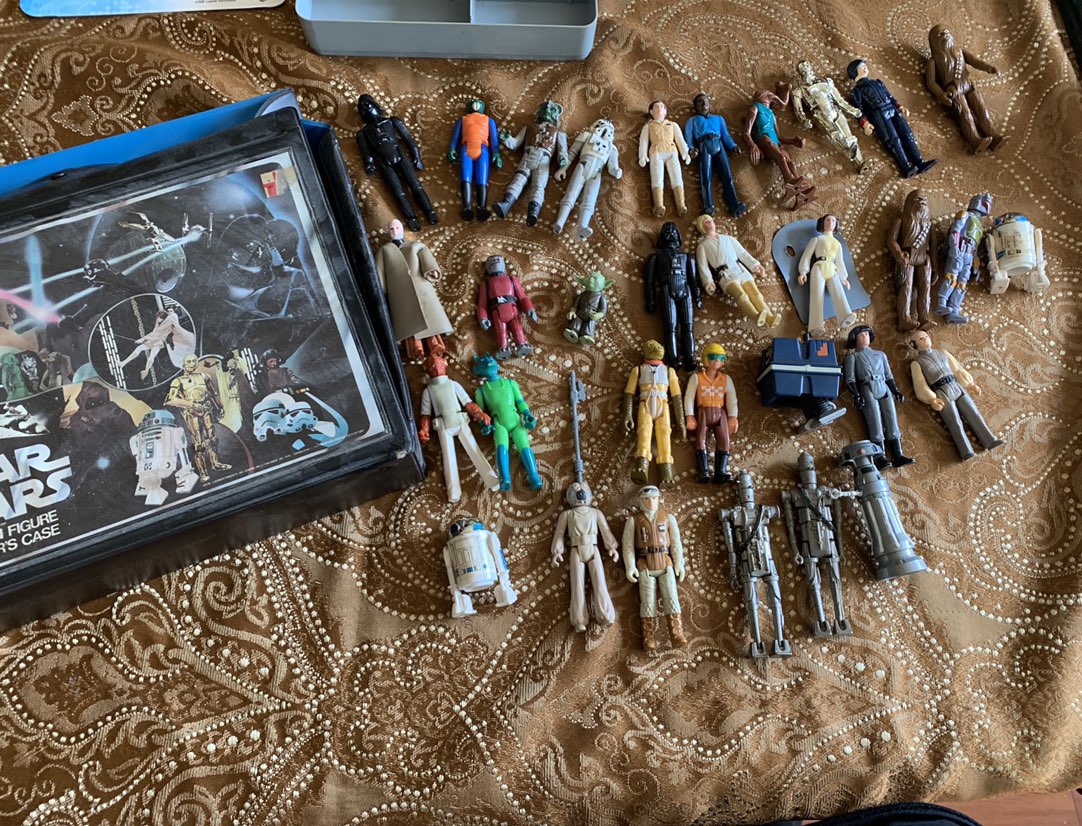 I haven't seen one of those Star Wars carrying cases since the 80's.  (yes, I'm old enough where they were new when I was a kid. Still have all my figures and playsets.)

And what's the deal with everyone finding Conker's Bad Fur Day all the sudden?  I've been yard saleing for 11 years now and haven't seen it once!

Don't know if I would call this a yardsale find, but it was definitely found near a yard. When I was visiting family today, I was informed that one of the neighbors was putting a bunch of stuff in front of their house for scrappers. I found this nice little set filled with vintage Kenner Star Wars figures, just sitting on the ground.

I also found this little guy. He's a rare first edition from the Sears exclusive Cantina Set. They later re-released him smaller and in a red shirt. I think this goes for like $300 right now. When I saw him in the box I was frantically looking around the curb for his gun, but to no avail. 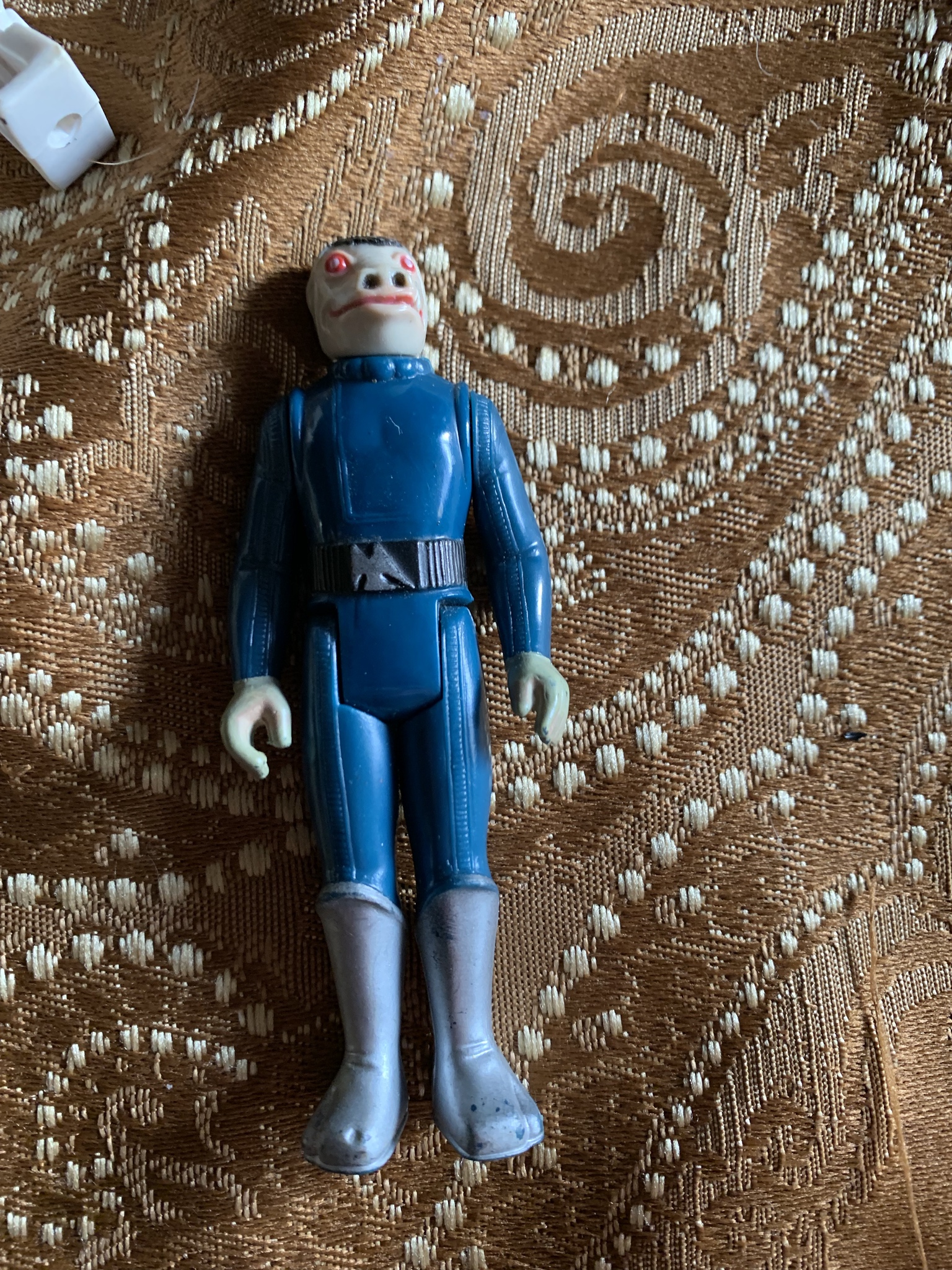 $25 for all the games. Under SM64 is a cart of Pokemon X I bought the steelbooks from some kid at a community sale who was obviously a collector trying to sell his dupes. He had a few SNES games but they were priced to sell. The lightgun I thought was an airsoft gun until I looked at it a little closer. The same guy had a Genesis Flashback but was asking too much. When I got home, a friend surpirsed me with the Halo Steelbook. which is great. Also not pictured is a Mario Galaxy collectors puzzle set and a few pokemon plush that I'll probably give to a neighbor's kid.

Not too much competiton this weekend. There weren't as many sales as opposed to last week, so I assume people just took the day off. 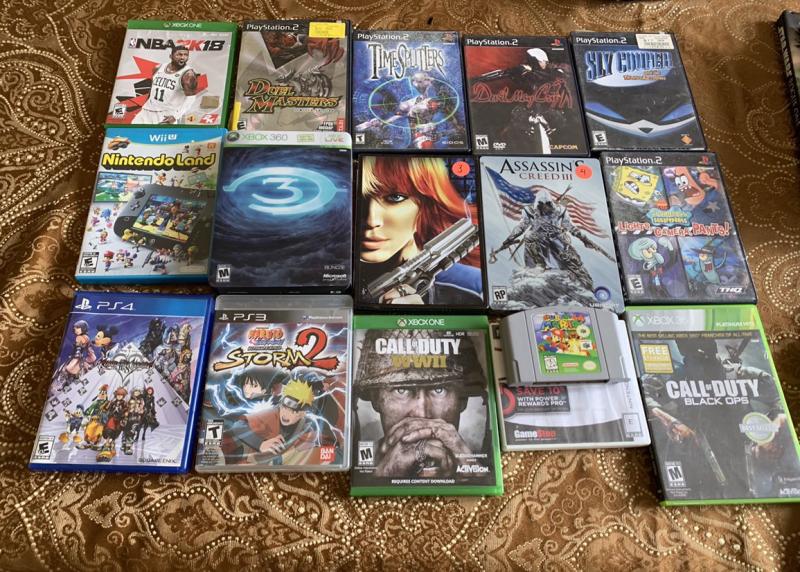 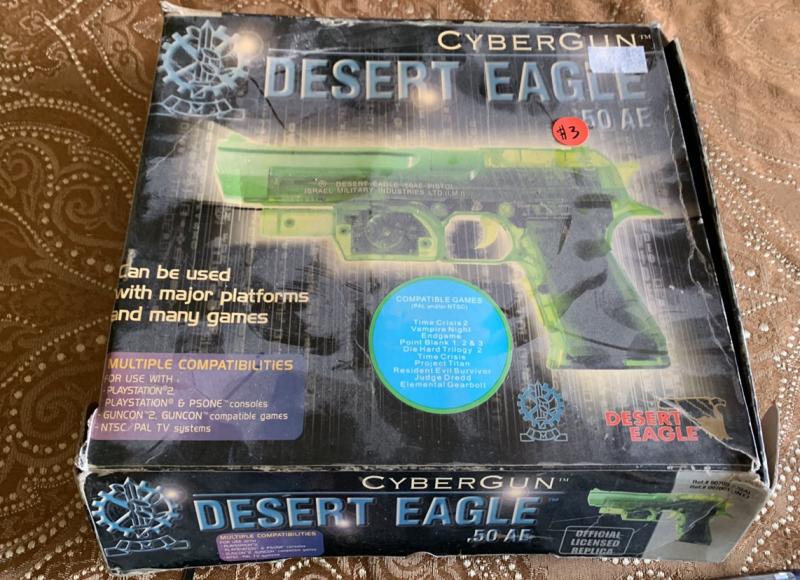 Look at all these finds. Pretty dead for me this weekend, probably due to the holiday. Next weekend should be better

There were less sales this week and I ran into more competition, so unfortunately didn't get any huge hauls at yard sales this week. That said, I did alright. Mario All-Stars was unfortunately empty, but it was a good disc holder while I was out. Spent a total of $20 for everything in the pics. 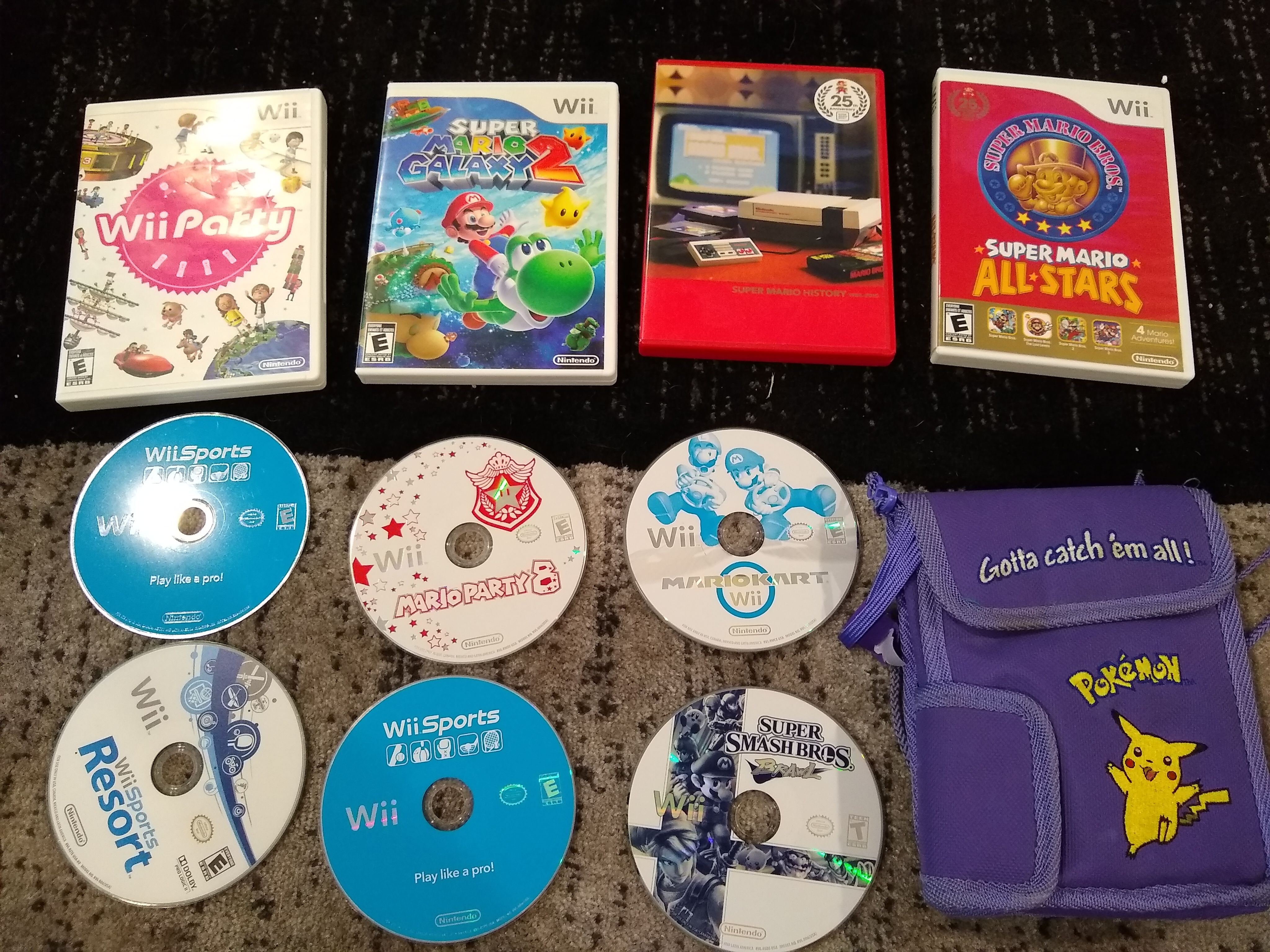 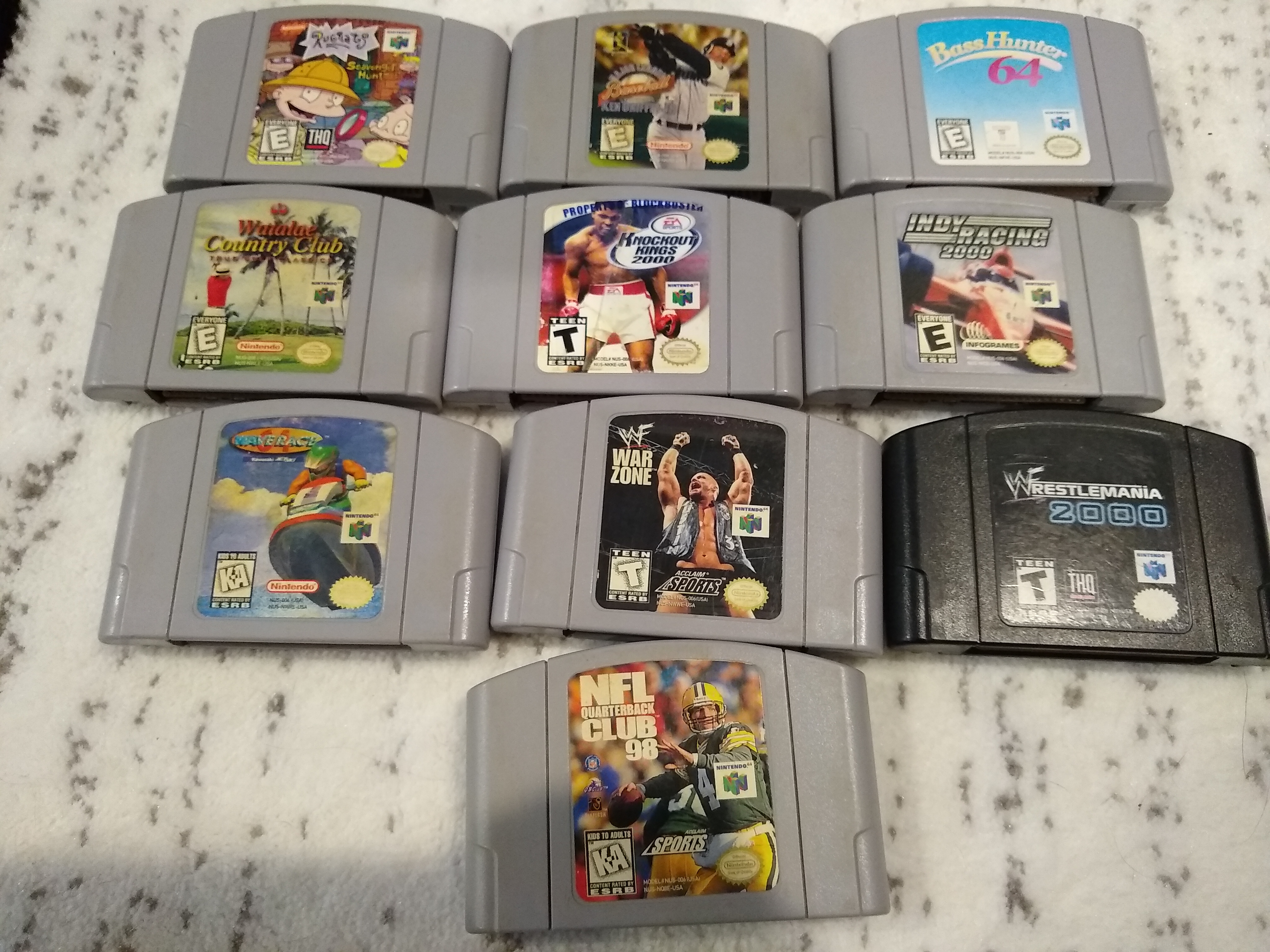 They were all the rage on the playground in 2004.

They were all the rage on the playground in 2004.


This is one from 1997 ish. I remember my younger cousins having one. I hatched an egg.... already can tell this is not for me.

This is one from 1997 ish. I remember my younger cousins having one. I hatched an egg.... already can tell this is not for me.

What a coincidence, I just hatched an egg a little bit ago.

You can upload pics to Imgur or Photobucket. You could also just try Google Drive

Car is in the shop. Looks like I won't be plundering for gold cartridges this weekend. 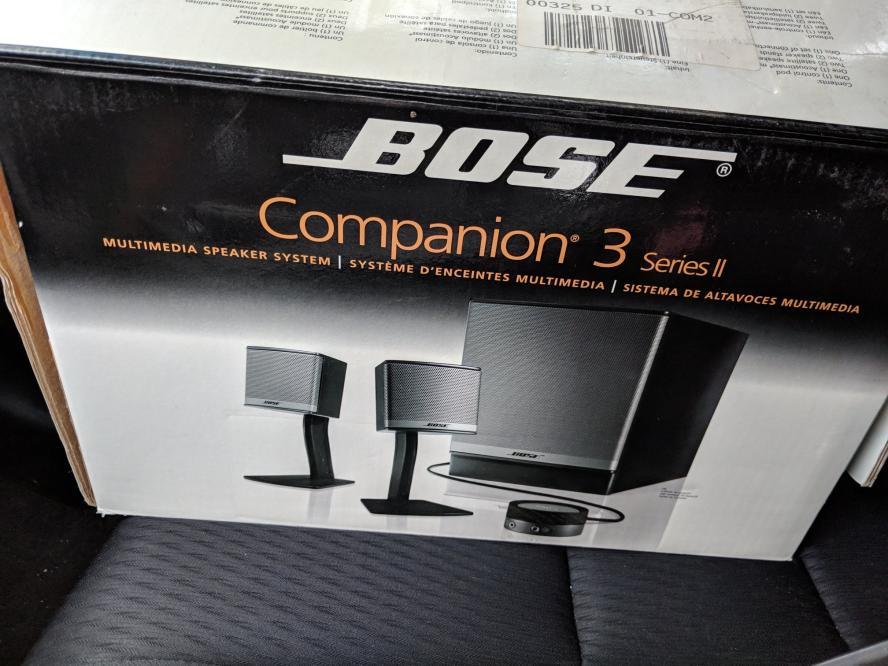 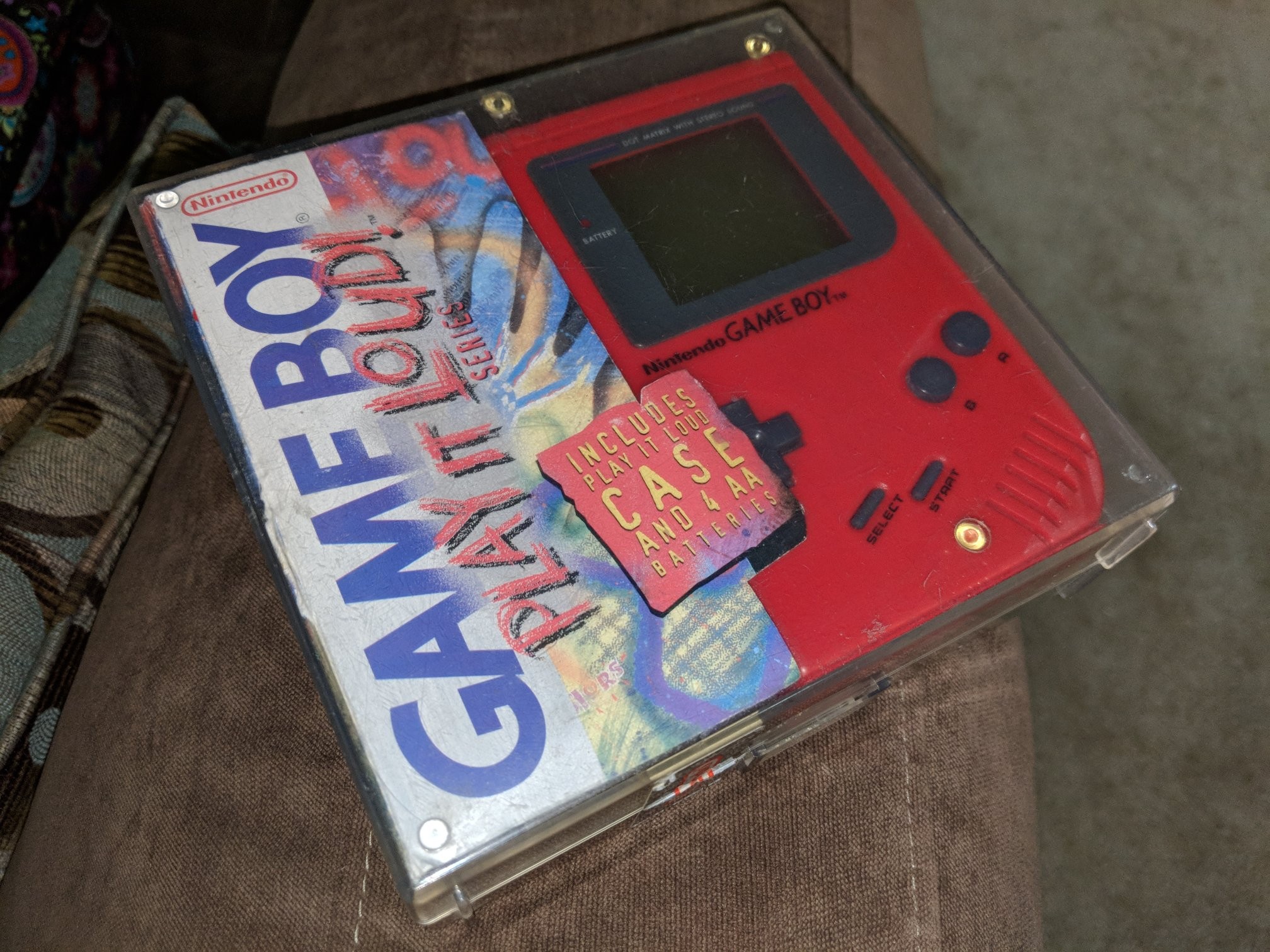 This controller was $7. It has sensitivity issues but I'm probably just going to use it for display in my X1 controller collection. 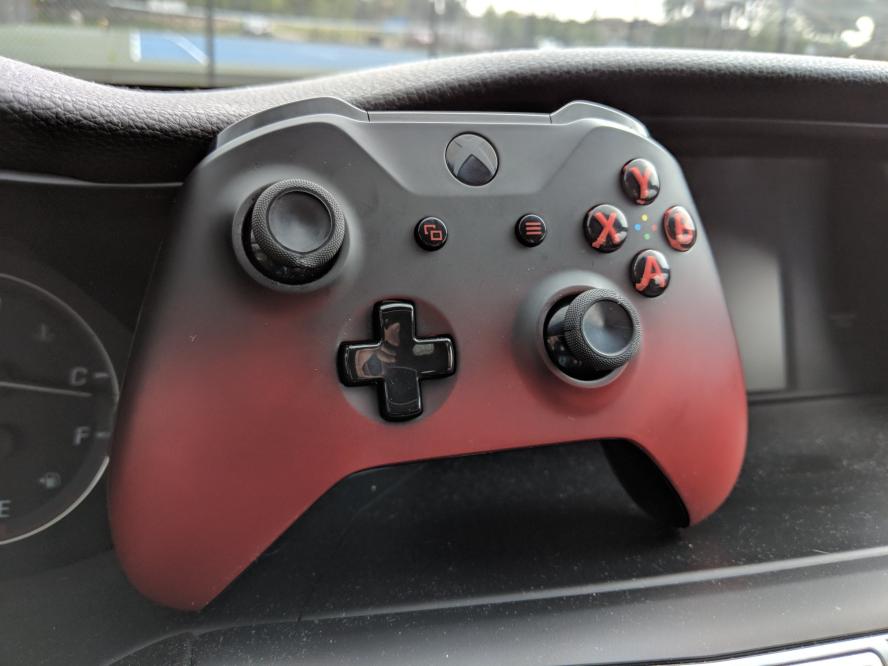 That Gameboy is a great find.

A friend went out today and managed to pick me up some Kingdom Hearts games for the Ps2. He said he went to some church that looked like a lighthouse and missed out on a huge stack of good games.

You know I was actually up early and thinking about going out.........then I looked at my stack of Ebay stuff and thrift stuff and messed with that instead. Stopped by a few sales on my way to Goodwill and Taco Bell. Lots of baby stuff and clothes....

Got this Dell Venue 10 Pro for $19. It has Windows 8 I hope to upgrade it to 10 but so far I keep getting an error when I reach the Installing Windows 10 screen. Tried using MediaCreationTool 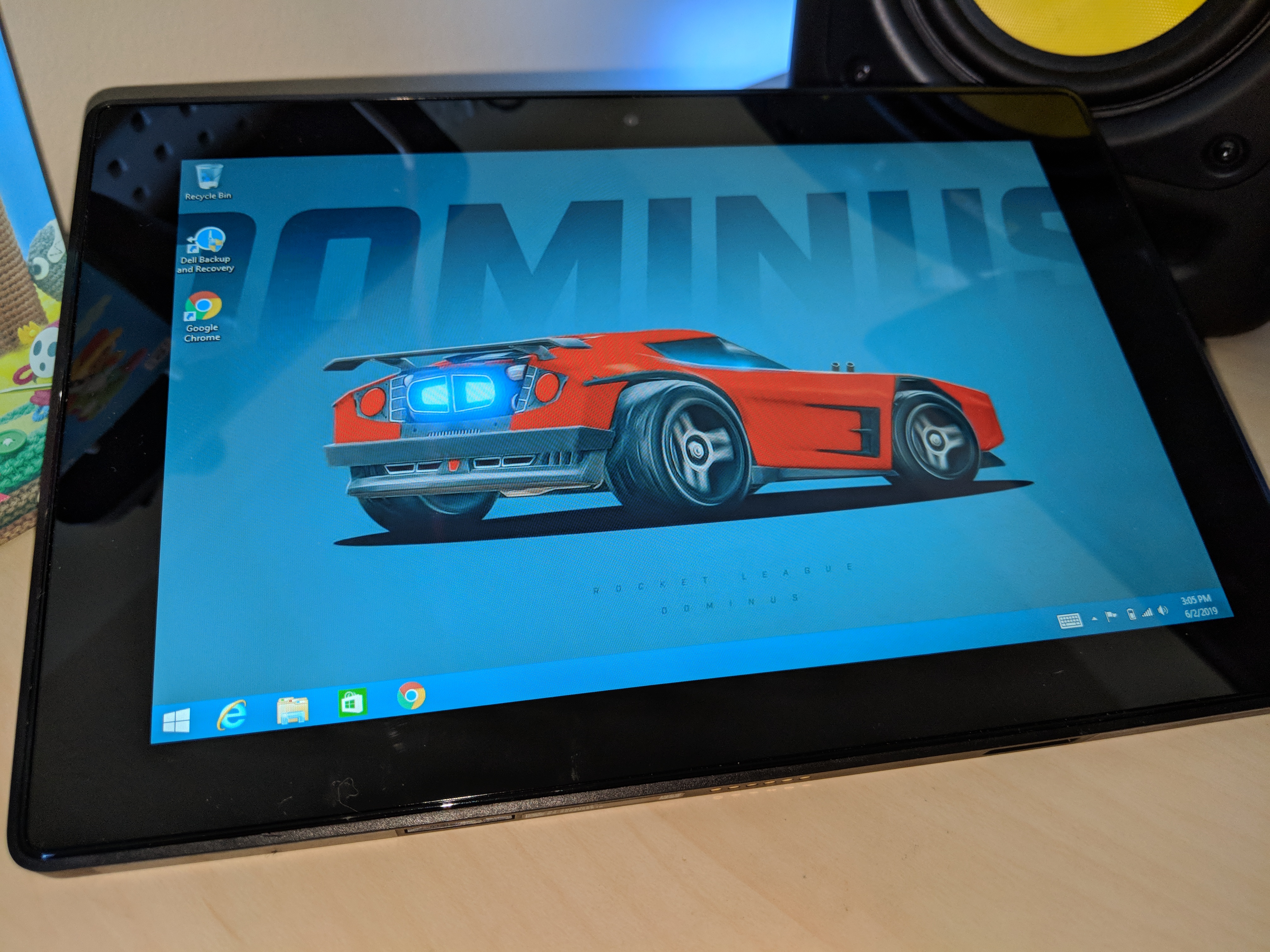 This weekend I went out yard saling with a friend who also likes to find games, but fortunately only Nintendo stuff, and it turned out to be one of the best days I've had so far. We hit up a community sale in NE Baltimore that was sort of annoyingly spread out, but that may have worked in our favor to keep us away from the competition. The biggest score is obviously the Vectrex, the first I've ever seen in the wild which I snagged for $20. I was worried about it not working since the box has water damaged, but it functions perfectly! On a related note the Colecovision and games, which was also $20, needed some cleaning but is also working well. The rest of the stuff in the pic was about $10 and include DKC3 on GBA, LBP3 for PS4, some some Nintendo toys for the kiddo, and some CDs for the car. 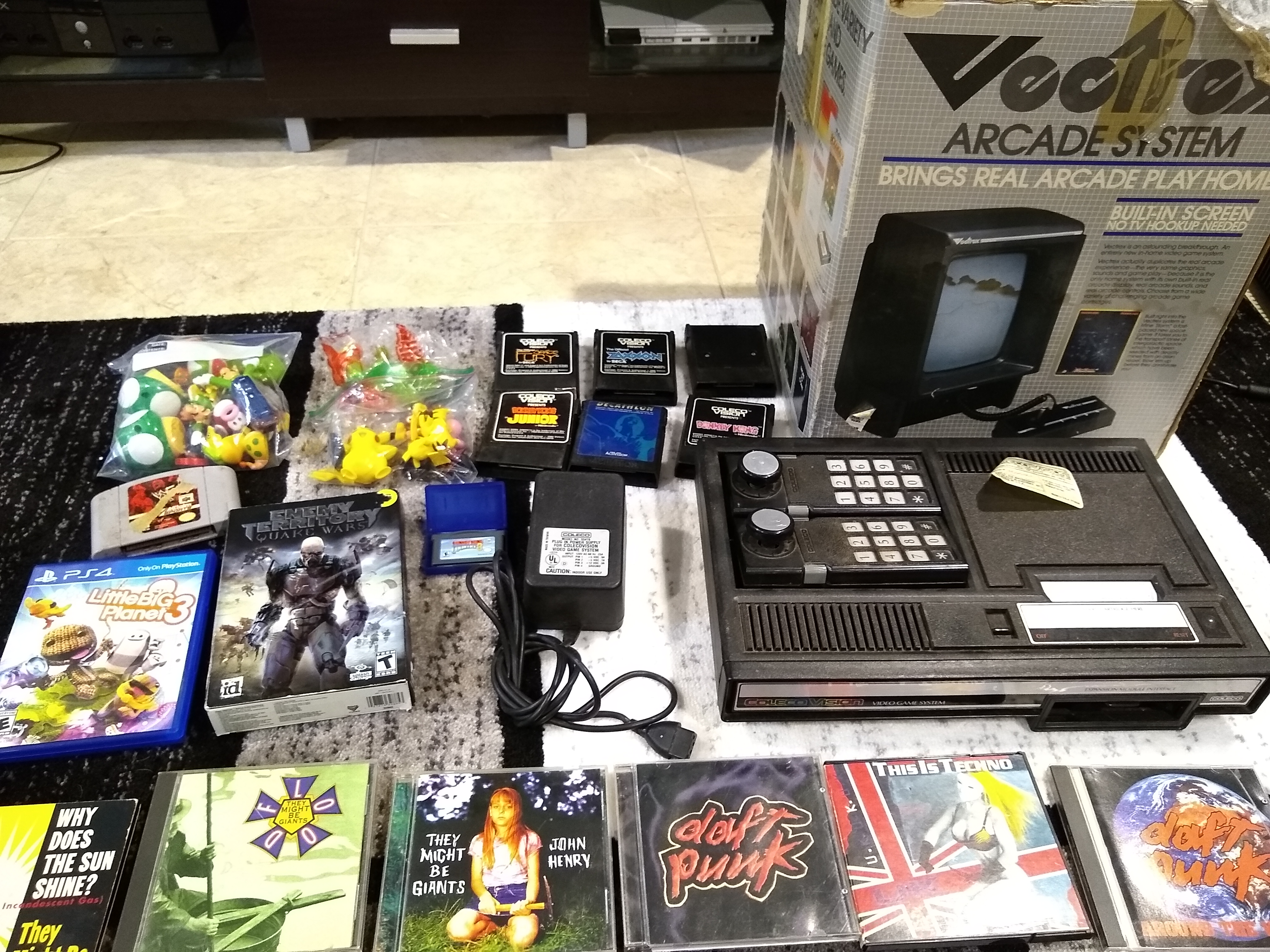 Holy shit, you lucky bastard. I bought a Vectrex from a now-defunct auction site fifteen years ago, and it cost me $75. They've nearly tripled in price since.

Great find. Daft Punk and Vectrex are always a win in my book. I’m still bummed about a few years ago when a friends dad who was a reseller, picked up a sealed 3D imager with games right next door to my house.

Stopped at two today that I've been to before but they had some new stuff out.

Was tempted by a Nikkon Coolpix digital camera in the box for $10 but passed. I have 3 digital cameras already, two really nice ones (Sony and Canon) and another.

The guy told me he used to collect and play a lot but doesn't anymore and wanted them to go to a good home.

Everything was $20. The n64 cartridges were broken apart from the top. my best guess is someone was checking to make sure they were real but didn't know what the crap they were doing so they just forced em all apart. Some masking tape seems to be holding em together 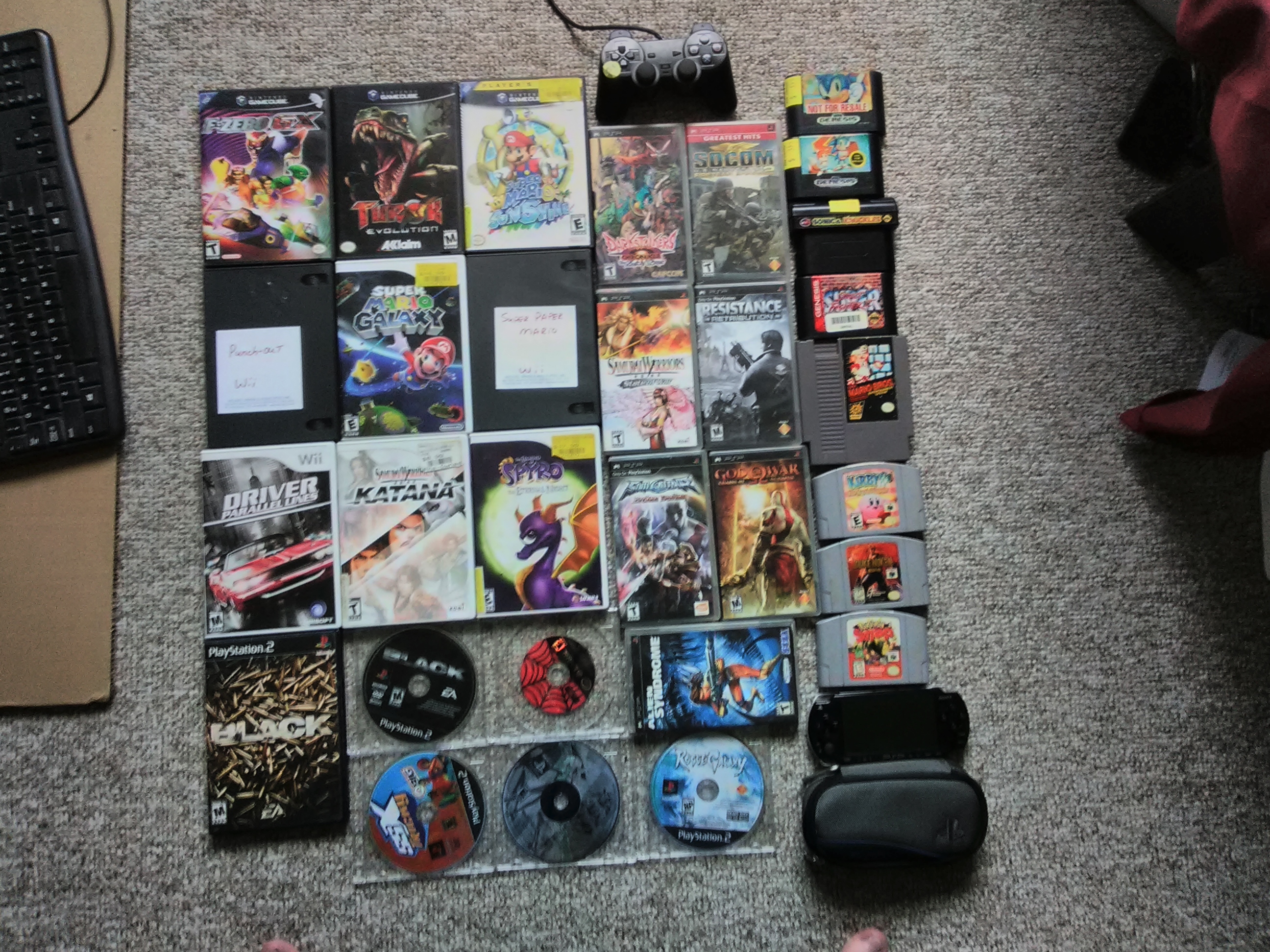 Nothing this week aside from a loose disc of Crash Warped for the Ps1. That's a pretty good set. Did all the games come from him?

Some finds in the past week.

Switch 3rd party controllers: $7 for both

PSP was $12. Didn't come with a charger so the seller was selling it as is. Hooked up my PSTV cable to it and it works! 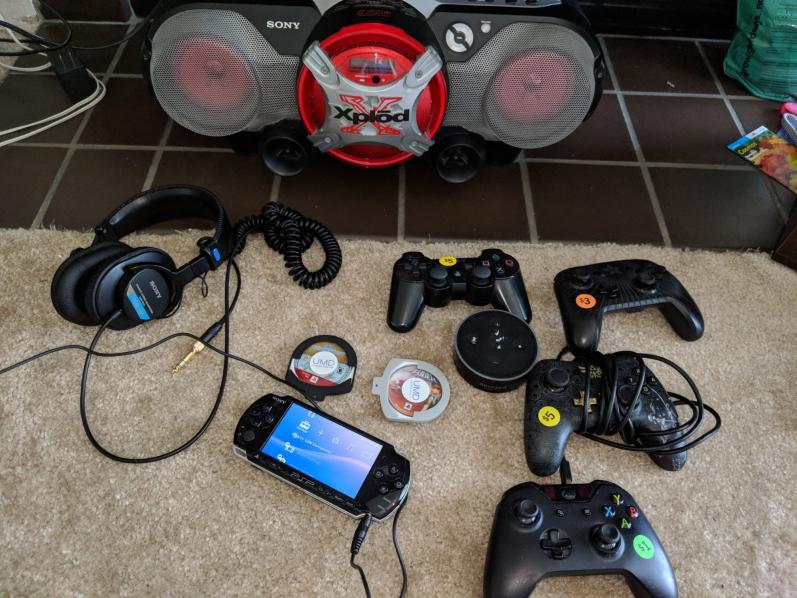 Edit: Almost forgot about the additional $5 trade-in at GameStop. Traded them for $21.50 towards Senran Kagura Burst Re:Newal - Tailor-Made Edition.

Ferrari: Some very nice catches there. Love the PSP, and that's the best model right there.

There was a big street festival near my house this weekend, so I spent the morning walking around the neighborhood hitting sales people were having to take advantage of the extra foot traffic. I came away with less games than I hoped, but made up for it with visual media and general weird stuff.

I spent about $25 on game stuff, though I forgot to include an NES Epyx joystick and mini Ms. Pac-Man arcade in the picture. Wii U is most likely broken, but it was free. 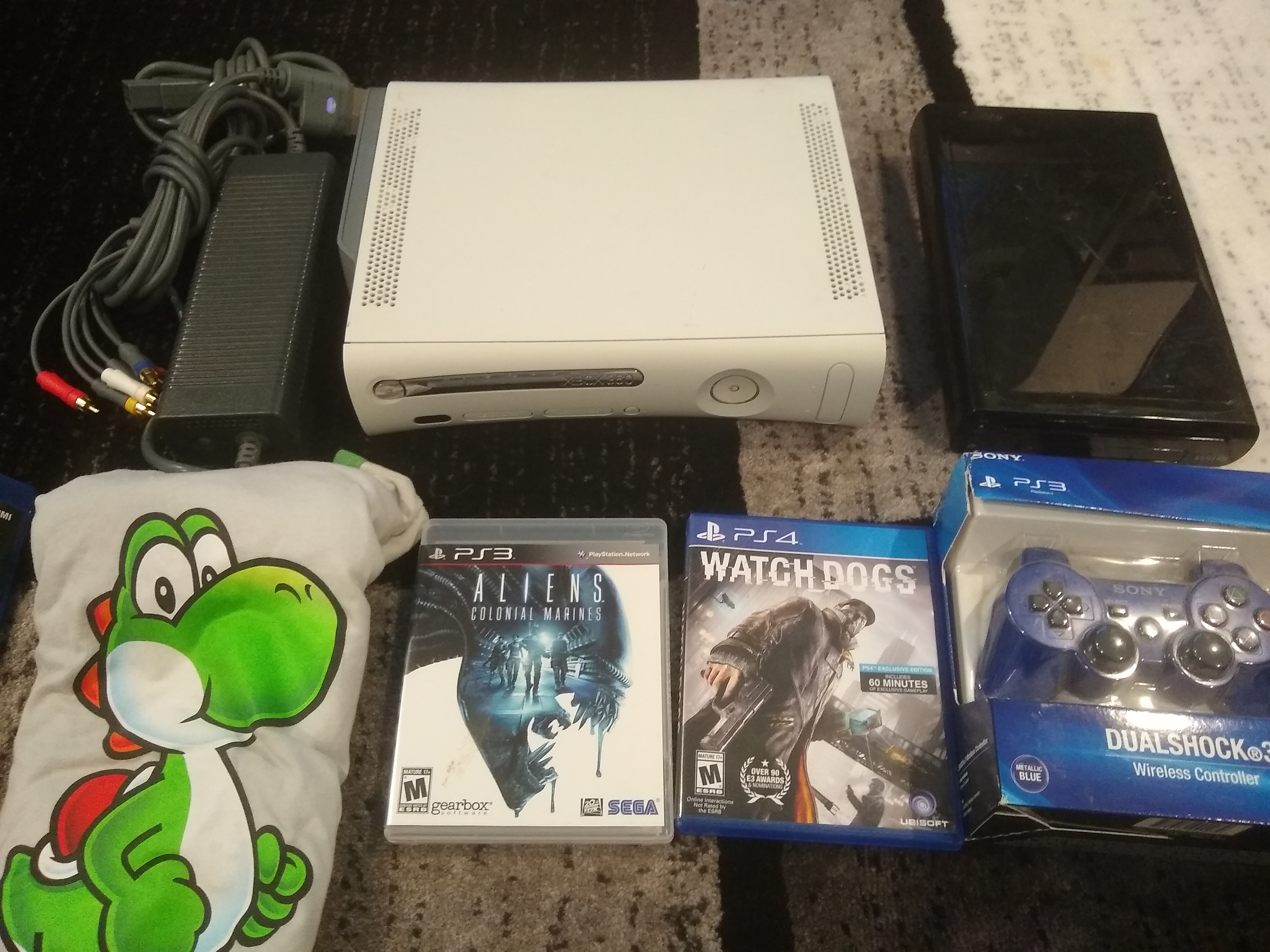 Stuff in the pic below was also about $25. Best parts of the lot at the Pete & Pete DVDs and that sealed Halloween trilogy. Guitar pedals are for my brother, and I'm hoping to clean up the little brass pot for use in my D&D room (it's covered in dragons). Not pictured is a child's guitar in good condition that we picked up for my kiddo's birthday at the end of the month. 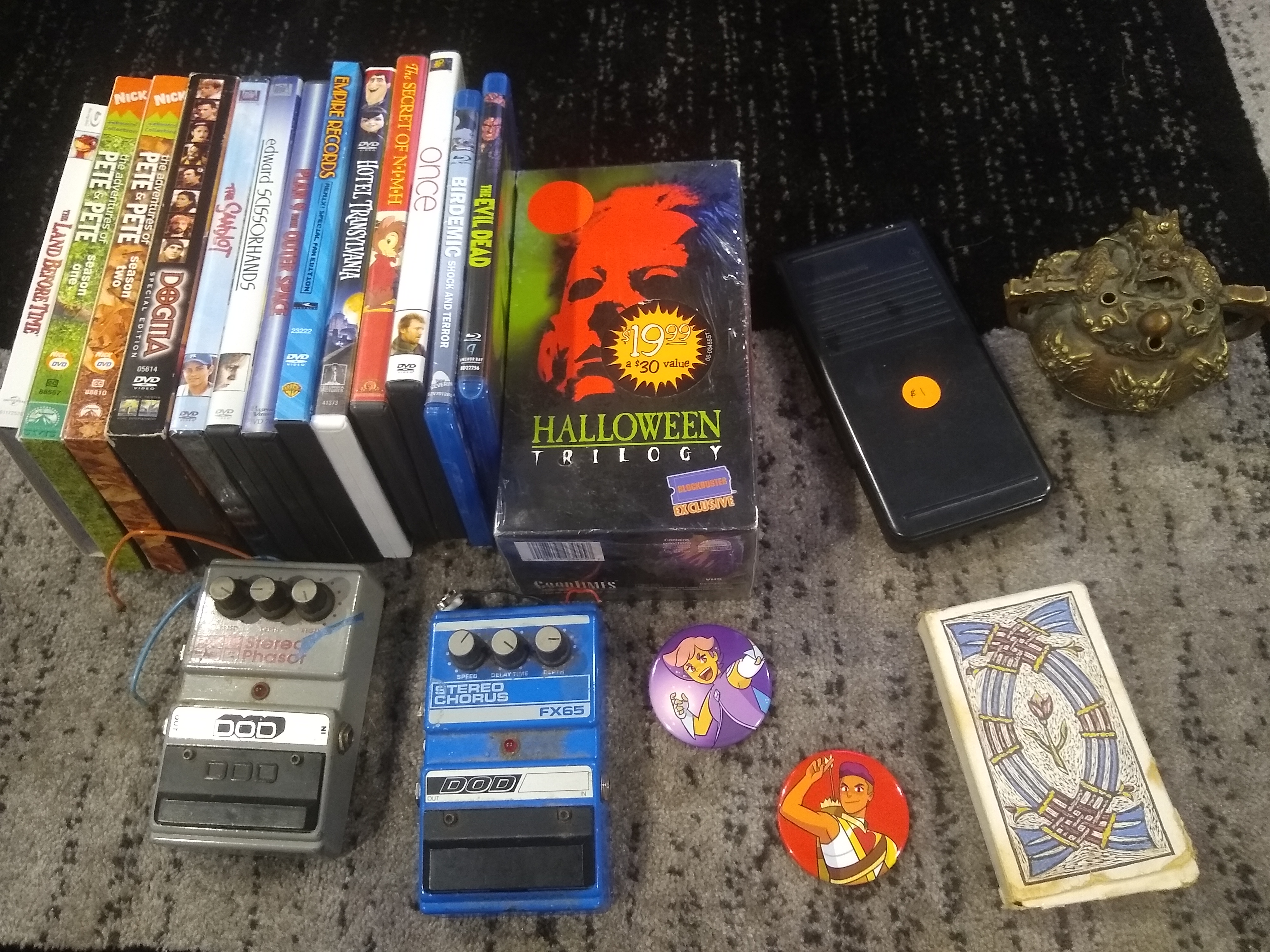 $40 for everything on letgo. It was up for 3 weeks and was originally $75, but I got her down. The app is basically dead in my area, and there aren’t too many people buying video game stuff. 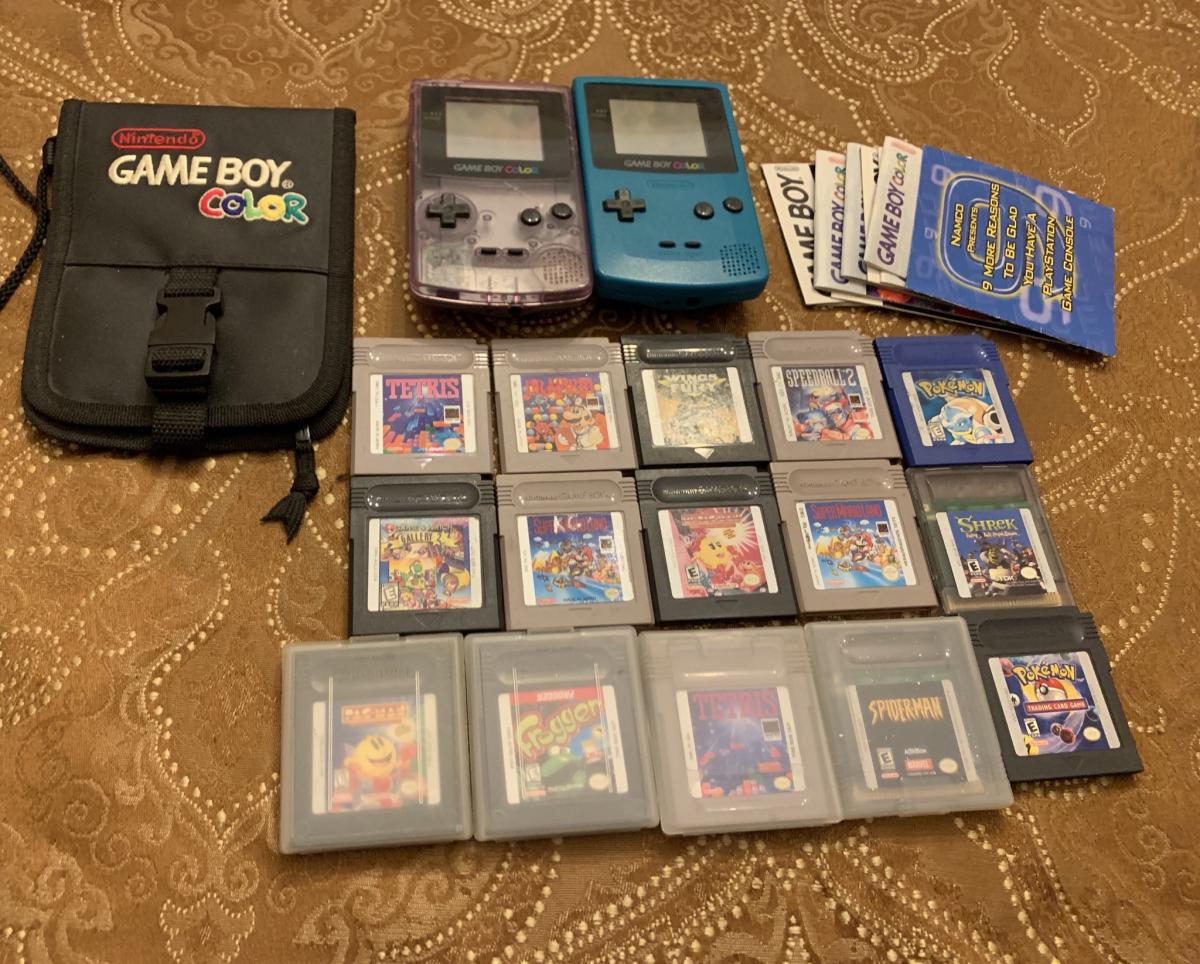 Been a slow few weeks. Lots of competition hunting even on Fridays. There is a local clown that buys everything on FB, sometime he hits Craigslist. Any retro games he grabs

Here's the few things from the last few weeks.

Weekend of June 2nd, went to a huge yard sale on the other side of the state. I go every year. Pickings were slim I passed on a OG xbox and an OG ps2 for $5. Saw almost no retro games, a few PS4 and Xbox items. I snagged a few TI-83 plus graphing calcs, a new Roku + 4k for $10, a few DS games, and an Apple Airport Express for $10. My bro snagged a loose wii and games for $20.

Last weekend snagged a white 4gb 360 slim with 1 controller and hookups for $20 I later picked up a few Star Wars paperbacks for $0.25 each and a empty cd wallet for $0.25 as well (these come in handy)

In my area there’s a lot of resellers who advertise buying games on Facebook and Craigslist. For yardsales they tend to swarm certain areas that I’ve learned to avoid. Backroad houses are always the best.

This guy has been spamming all of the local fb yardsale groups within a 30 mile radius. 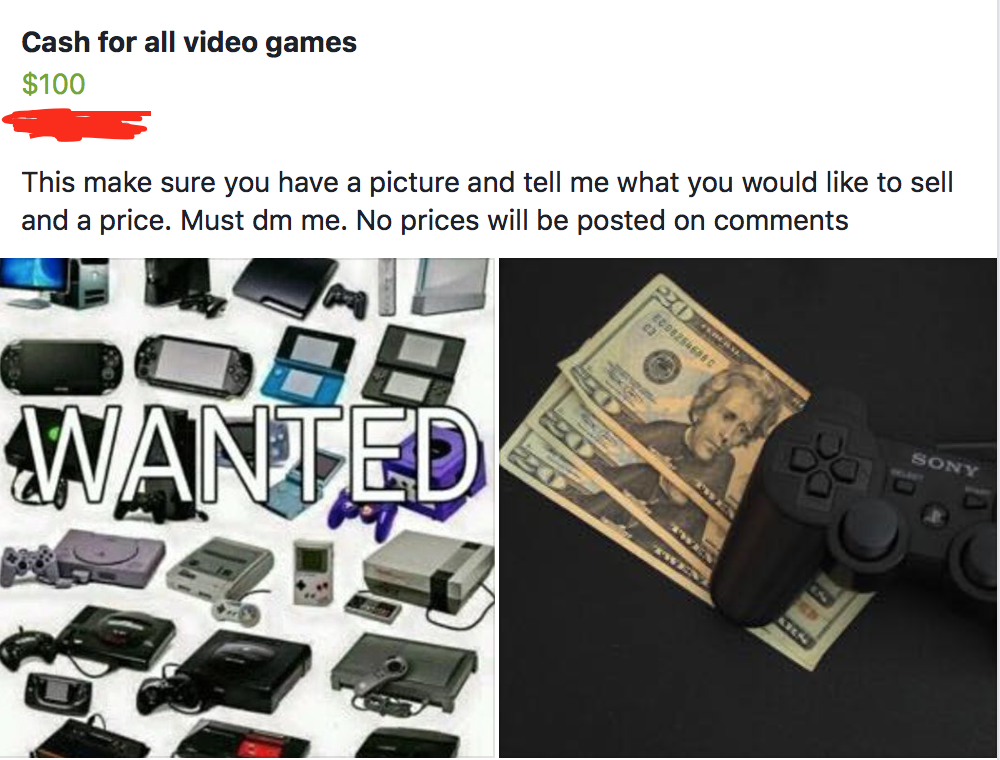