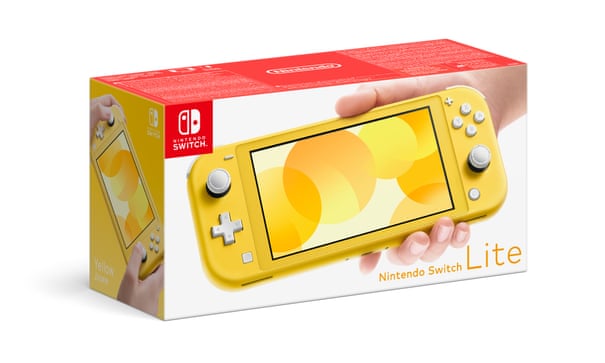 No TV hookup? No thanks.

Dammit no TV connection is a real bummer, but I really want the integrated controls with an actual dpad. The design of the Switch Lite is so much better than the standard model! I was going to trade my Switch in and get this, but now I guess I am just going to buy a second Switch. Dammit Nintendo, why do you constantly do this to me!

I would be more interested if the battery life was better, or if the price was lower. Only getting a single extra hour out of the battery is not a very big bump in time. Also, is it just me, or is this thing bigger than it needs to be for better portability? The reduction in overall footprint for it is very slight. I still don't feel like it is small enough or convenient enough to keep in your pocket.

I could see this thing being popular with kids, or possibly with commuter adults who don't already have a Switch, but that's about it. Anyone else would just go for the original model.

No HDMI output kills this for me.

Also, from a marketer's perspective, only Nintendo could brand the SWITCH as a hybrid home/handheld console, and then opt to remove the very feature in a follow-up device.

Average consumers are not going to be happy about this missing feature, which is by this point inferred by the console's name. At least the 2DS made clear that the machine wasn't the 3DS.

This'll make the perfect Christmas gift for my niece. Any idea when pre-orders might go up?

I own a Switch and for reasons unknown to me, I want this, too.

Damn Nintendo and it's grasp on me!

I own a Switch and for reasons unknown to me, I want this, too.

Damn Nintendo and it's grasp on me!

Same here. I am really sold on the no-JoyCons and a real nice looking dpad. I mostly play my Switch in handheld and have grown to really dislike the JoyCons the more I use them. Taking the HDMI hook-up out is a real bummer though because my initial plan was to trade my current Switch and get this one for cheaper, but now I want to keep my Switch and just straight out buy this one too!

I'm betting on a Switch "Pro" announcement early next year as well and I'll of course have to get that too....

Just wait for the Sword and Shield edition coming out shortly after?

When do we get the switch max? I don't want a dumbed down version of a lesser powered product.

Based on the fact the biggest problem with the switch are the joycons breaking. I’m hesitant to get a switch with built in joycons.

Will they allow you to have more than one system activated for offline play now. If not whats the point.

Man, Nintendo got me because my favorite color is Yellow and I've tried my best getting every Yellow variation of Nintendo consoles and now I'm forced to get this one 😭

Based on the fact the biggest problem with the switch are the joycons breaking. I’m hesitant to get a switch with built in joycons.


I would guess that a majority of joycon issues stem from being slid on and off the system over time. Having a more traditional, built-in control option should alleviate most of those issues. Plus Nintendo hardware is almost always solidly designed and kid-proof.

Tempted to pick one of these up but will wait for the Pro model next year.

This is what I've wanted since the Switch was announced, a dedicated portable similar to the Vita. I'm bummed it won't support HDMI but I honestly don't care / it won't prevent me from purchasing one. The standard model is just a tad too large for me to consider it portable enough to carry with me most places, and the price is definitely right for the new one.

With a length like that and analog sticks that stick out that far this is very much not a portable.

What even is this lol, nothing but an excuse to delay a real hardware revision and/or price drop for the actual Switch

This'll make the perfect Christmas gift for my niece. Any idea when pre-orders might go up?

GameStop expects SKUs by Thursday so they can take preorders

This will happen when the Switch can play my 3DS games. Which will be never.

Bear in mind that this version will only be able to play games that work in portable mode. Not having owned a Switch previously, I couldn't tell you how many (if any) games that is.

Calling this device a "switch" works if it can seamlessly connect to a docked switch somehow in order to at least transfer game data.

So they took out the hdmi and joycons to save 100 bucks and then made the screen smaller also? No thanks. A switch was already portable and had more. 100 dollar savings isn't enough to justify something that still can only play switch games on it. If it was 150 that might justify it but it would also need a pack in game of at least Mario odyssey.

Besides Super Mario Party, are there any other notable titles that can't be played in handheld mode?

are there any other notable titles that can't be played in handheld mode?

1, 2, Switch. That would be one of the more prominent titles that won't work without Joycons. Of course, they've already confirmed that you can pair Joycons as well as other bluetooth controllers to the Switch Lite. So it's not impossible, it just can't be done with what comes in the box for the Switch Lite. I imagine that will be the case for pretty much all the games. There are very, VERY few games that don't support tabletop mode.

Essentially, the only really big limitation on Switch titles at this point was not being able to use the touch screen in docked mode. And even that wasn't that big of a deal thanks to clever developers taking advantage of motion controllers and accelerometers to let the user "point" at the screen. And the Switch Lite can't do docked mode anyway, so you always have access to the touch screen. The big downside is that using motion controls on a Pro controller is going to be kind of piddly with the Switch Lite. (motion controls on a screen that small, not a pretty prospect) Though I suppose it will probably have its own accelerometer, so it won't be entirely devoid of wiggle.

Basically, existing Switch owners are going to have little to no reason to "switch" over to the smaller, less capable version. Prospective Switch players are going to have a bit of a conundrum to sort through. Save a few bucks and go for greater portability, or spend a little extra and enjoy some expanded functionality and flexibility? The decision is not that clear cut for someone who doesn't already have a system. Nintendo is providing a choice, not an obvious alternative.