The gang talks NPDs, Moving Out, The Persistence, Knights of Pen & Paper 2, GameStop reopening stores, NVIDIA RTX Voice and so much more! Listen to learn how to win 1 of 5 Sonic the Hedgehog Movie Blu-rays!


This episode is sponsored by Mack Weldon
For 20% off your first order, visit mackweldon.com and enter promo code CAGCAST.

Check out the CAGcast on YouTube for clips, complete episodes, and more!

I haven't seen the Sonic movie yet, but I imagine in typical sequel fashion, the story will take humans into Sonic's world.

What do i want to see in the next Sonic movie: Hardcore fucking... duh!

I am really hoping Fiona Apple is in the sequel.

The sequel needs to somehow interact w/ my Dreamcast VMU.

I think I need to see more Sonic Racing content, and they can call it "Sonic Drift".

I will see myself out.

For me I want the sequel to be a team up, with Tails, Knuckles and Sonic all going back to his original planet, which Eggman has somehow gotten to and started to take it over using Robots. Basically anything going back to that planet and not on Earth.

I need to see some cute animals popping out of cute robots when they get destroyed. Also would be up for Super Sonic or Metal Sonic to show up in the stinger. Don’t need Tails backstory; do need Big the Cat backstory.

I would like to see Tails in the sequel. I haven't seen the movie yet so I'm not sure if he is in the move. Good Luck everyone.

I'd like the Sonic sequel to be a musical. I haven't seen the first one yet but I'm sure they can lead into a musical somehow.

I just want the Sonic sequel to have a guest appearance by Cheapy where he continues the trend to shout BIG ASS CHAINS in random promotional materials.

I haven’t seen the Sonic movie yet but I hope there’s a sequence in the sequel where Doctor Robotnik captures Sonic and replaces him with a Robot/Metal Sonic in the hope that no one will notice the real Sonic is gone...and the fake Sonic looks exactly like the original design for Sonic from the first movie.

Only pooped in high school if an emergency since the stalls in the boys bathrooms didn't have any doors. Additionally, the stalls were exactly opposite of the mirrors over the sinks so you see people shitting when washing your hands. There were decent bathrooms in the pool locker room and dressing rooms for the theater.

It's Knuckles in Sonic 2 or go

Toughen up Wombat, you sound like a weak emotional wreck. Set a better example for your family.

i'd like to see tails or Knuckles in the sequel.  maybe a marvel tie in character. 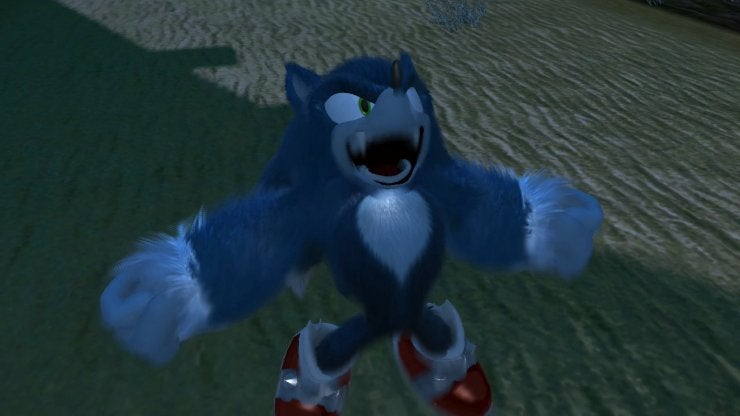 I want the sequel of the Sonic Movie to also serve as the sequel to Balls of Fury.

A Sports Dramedy, Cheapy shows Sonic his FitBit stats of playing Ping Pong and arguing that he burns as many calories as Sonic playing Tennis. Action and Emotion galore!

Want to see Super Sonic in the sequel.

I want Sonic to ride around in the Outrun car and I want the Virtua Fighter Characters to by on the antoganist side. That’s all. Maybe tails and knuckles, something like that

The sequel should star Shadow the Hedgehog and be dark and include guns...It worked really well in the video game space so I think the movie would really benefit from it.

waiting for knuckles and shadow in the sequel

Sonic meets his new sidekick, Wombat the.... wombat. They race through Massapequa zone collecting between 9 and 27 ping pong balls before the evil Dr. Cheapy can use them for Twitch streams that one’s of people asked for. The story culminates in an EPIC discussion where Sonic and Wombat debate Dr. Cheapy about the validity of virus testing at a retail video game store while mildly evil Shipwreck instigates them on. It goes nowhere but manages to be entertaining.

with Knuckles as is tradition in the Sonic franchise.

And in regards to the V Bucks thing, having to go to a store to buy the card is already crazy enough nowadays, and I'm curious at how many of their sales actually come from those things. Epic doesn't need to help Gamestop and it's just a matter of time before they go away forever unfortunately.

For the Sonic the Hedgehog movie sequel I'd like him to do Wreck-It-Ralph kind of thing but visiting recent modern video games, like Halo and Grand Theft Auto. Having super speed would make them easy for him.

Spoiler
Well since we know Tails will be in it, my guess is that Dr Robotnik uses the sparking hedgehog quill to power a space ship to fly back to earth. Then Dr. Robotnik will build some type of giant robot that Sonic will have to fight and he will get overpowered and only his friendship with Tails will save him. Does that sound reasonable?

In the Sonic sequel he needs to enter the Sonic Multiverse and team up with the Sonic from the original trailer so Internet hysteria can happen once again.

Edit: btw, I hear what Wombat is saying about GameStop focusing on digital cards/codes, but I think I agree with Shipwreck that Epic doesn't get much from the deal. Once a sale like this is shared on CAG and similar places, would the money lost from the discount be made up by sales from GameStop? It wouldn't just be people who are waiting for an excuse to buy a discount card, but people who would normally buy the cards at full price too. So each of those discounted sales to those people is money lost. Epic would also lose money on the sale since GameStop would take a portion of the sale, instead of all the money on a direct sale. So the sales numbers would need to make up for that as well on top of the discount.

This Sonic movie was way better than it had any right to be. I’d want the sequel to maintain that level of quality & just add a few more characters.