This month is for me. I love the Dragon Quest and Assassin's Creed series. I can't wait.

There's a new PS Stars campaign on the app for playing a game to get a Banana Boomerang.

To sum it all up meh is my main feeling.

I played the PS5 demo, but it's not optimized for PS5. Even under the performance setting there was some slowdown in battle, which for the graphics is kind of unacceptable. This is a PS4 game through and through, but I wont count it against it. The graphics are average looking and could have been on the PS3 even. The models for non main characters are laughably generic and feel out of place next to the main characters. All the terrain is really just OK and generally bland overall. The main characters also feel very generic and bland looking. They do stand out a little with their outfits at least. The effects in battle are also PS4 quality. The music is generally good, but some of it is very generic. The town themes are decent though.

The controls are good for the most part although there is a lot of menus that are somewhat slow loading at times (pauses here and there on the PS5). In combat everything just feels free form and not as clean to control. It's not as easy to see tells to dodge unless it's a huge enemy attack. You get a new mechanism outside of battle and in it for movement and it generally works well to explore this vast generic land.

The systems for the game are good for the most part. There is a lot of fluff in level ups with a grid system similar to Dragon Quest 11, but with what seems to be less customization. You can go anywhere on the grid, but the level up points aren't a lot, so unlocking on the grids is slow. The combat system has this combo system thing where skills learned can be applied to part of the combo for three of the buttons. This works okay enough, but some skills don't seem combo worthy like magic ones and really weird charging ones and such. It's a way to get a variety of skills going, but it's clunky for sure. You can also upgrade a companion you get with gems you find, and this is mainly fluffy, but can help out a little in battle. You see enemies out in the field so you can choose to fight them or not.

The story is as basic a Star Ocean story as can be. You play a captain and the ship goes down leading you to be on a more underdeveloped planet. Then you adventure on the planet with the people you meet. It's not too exciting and there was no big revelations in the demo. The characters seem very one note right now with a curious princess, a young rebel captain guy, and the princess' overprotective steward. They are bland and generic, but not the worse. I can see potential for the main character and probably the princess, but the other guy is just there. There will be more playable characters, but what was here wasn't exciting.

Overall I feel the game should feel a little more optimized to not have slowdown in combat and sometimes on the field with the generally simpler graphical system. Nothing is exciting here, and I feel this is going to be a very generic game overall. It feels lesser budget and I love Star Ocean (1-3 mainly). I don't think it's going to review well. I would give it a 6.5/10 right now, which on my scale is good and playable, but not exciting. I hope it comes out better than what I played.

I have a bad feeling about the future of Tri-Ace.

I’m pretty sure I’ve logged more hours on my PSP since the start of the 8th generation than on any 8th or 9th gen console.


They have refused to localize it every time they ported it.

The text for the Star Ocean demo is so tiny, almost like it was designed for PC first lol

I just hope by the time the next Monster Hunter console game drops Sony stops being slack ass about custom plates.

I was planning on doing a franchise run of God of War. Sounds like a good time to put that into motion.

Yes it counts and you're entered into the contest. Just make sure you "unlock"  the contest from the Sony Rewards page.

Just saw this on the webpage after registering.

lf you’ve previously completed God of War and earned the “Last Wish” end-game trophy, then you'll automatically be entered into the sweepstakes.

They keep adding more Ape Escape rewards to PS Stars.  Are they competing with the ape jpg NFT market?

You can still get two $10 PSN ($20 total) for $10 every month after coupon by doing it in-store first and then online immediately. Just make sure to screenshot the $5 off code (via GS app) before going into a store. The $5 off coupon code disappears from the app once you used it in-store.


You convinced me to sign up for a pro membership, thanks!

Yeah I already platinum’d it this summer. Not expecting to win with my luck tho lol

There's a new PSVR campaign on Stars for just playing a game. Doesn't have to be a PSVR game.

PSN question following a weird experience if anyone knows what happened.  I hardly use PSN anymore due to my decision to wait on another ps5 model and also their change to a horrible website.

I redeemed a code on ps4 console for the Nioh 2 Season Pass (the voucher from the SE expires 3/23 and I didn't want to forget)
The code showed the contents of the season pass on the verification screen, as it normally would
After redeem, it gave me an error message saying try again later
If I enter the code again, it now says it's been used.
When I check the season pass content on web browser, it says unavailable for purchase (perhaps because my account owns it now?)
But through ps4 console it does not show me owning any of the dlc or season pass, allows me to buy them if I wanted.

After redeem, it gave me an error message saying try again later

If I enter the code again, it now says it's been used.

have you tried checking your purchase history?

have you tried checking your purchase history?

Yes.  Right now I get "You already own another version" if I view the SP or any of the dlc items.  The link takes me to https://library.play...ently-purchased, where nothing Nioh 2 related or any recent transaction is shown at the top of the list. 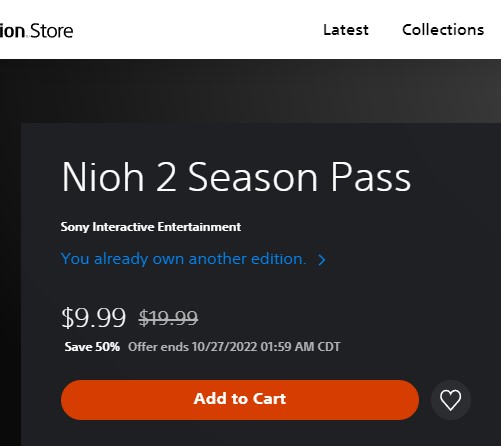 My conclusion so far is that particular dlc is messed up on the psn store.

PS Stars is pretty bugged for me.  I have completed two of the challenges, but nothing registers.

Probably come back to it when they have less issues.

PS Stars is pretty bugged for me.  I have completed two of the challenges, but nothing registers.

Probably come back to it when they have less issues.

That's why I haven't even looked at PS Stars. New shit is always buggy (not just form Sony) so no need to waste my time until it's been out for a while.


I bought a $20 game and got 200 points, which would be about 4% back in rewards. Nintendo is 5% back, so I guess it’s slightly worse then Nintendo.

Microsoft is still the king of rewards. I bought a $40 PlayStation game the other day with all Bing points from Microsoft.