The gang wraps up Thanksgiving and Black Friday; talk Super Mario Bros. movie trailer, Need for Speed Unbound, all the stuff they watched during the long weekend, and so much more! Download (1 hr 18 minutes) - iTunes - Google Play - Stitcher - RSS  - YouTube


Check out the CAGcast on YouTube for clips and complete episodes.


Please submit your show questions via CAGbag or Twitter.

I'm going to get slammed for this but I have to stand up with Wombat regarding Slumberland.

Cheapy was quick to dismiss a property and creator that's massively important historically to both animation and comics.

Winsor McCay was a pioneer in animation and comic design. His influence on both mediums is huge. His gorgeous art-nouveau styled comics elevated the medium in a way few had until modern times. 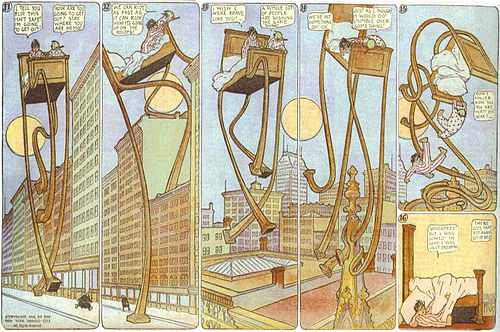 Little Nemo in Slumberland's media history is large, and not just in old-time comic strips.

Sure, a newspaper run in the early 1900s doesn't sound like a lot, but that has been followed by theater, opera, a 1989 japanese movie (released in the US in '92), an NES game, an arcade game, references in various modern comics (Sandman, League of Extraordinary Gentlemen), a comic book reboot in 2014, music videos by Tom Petty among others...

In short, Little Nemo in Slumberland is not "something nobody has heard of".

In conclusion, yeah, it's public domain, but they could have given Winsor McCay a credit.

Sorry for the kinda rant; no offense, Cheapy, listen to Wombat, he knows a lot of historical stuff that has value

P.S.: I'm fine with the modernizations made for the new movie; the vintage stuff certainly has a lot of then-common racial stereotypes that no one needs.

At the risk of making you double down on not watching it, you really need to watch Andor.

I just finished it, after hearing all the positive buzz.  And I almost tapped out after the 2nd and 3rd episodes.  But by the end of the third I was in and the show just got better and better.

Not "it's fine" good, like most Marvel shows or Mandalorian.  Actually.  Really.  Good.