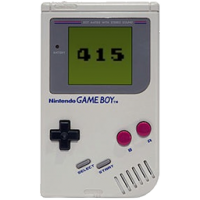 Gameboy415 hasn't added any friends yet.

I scoped out a nearby closing store today and confirmed they're doing the 5 for $5 but there was sadly not much left of interest.
I ended up grabbing Soul Calibur V for XBOX 360 (CIB), Touch Detective 2 & 1/2 for DS (cart only), & Picross 3D for DS (cart only) for myself and TMNT for 3DS & Just Dance Disney Party for XBOX 360, which I traded in to another store for $6.60 cash.

So basically I ended up with 3 games and $1.10 more than I started with, haha.

Also, with Elite Pro officially ending in 2 days, I went ahead and cashed in my banked PUR points (had enough for a $30 Switch game) and dumped the rest of my decently-valued trades today.

I'd already traded in $492 worth of stuff for cash this month and I just got another $297 today so I'm fairly certain I'll be hit with a trade ban but with the 20% bonus going away I'm pretty much done trading stuff in anyway.

Confirmed today 50% bin games are no longer ringing up with discount.

This was the case at my local store today too.
There were still tons of games on what was previously the 50% off shelf, including 3 copies of the Splatoon 2 Starter Pack (which I wasn't able to find anywhere while the sale was active).

Oh well, here's hoping they eventually go on clearance or something...


Got some obscure/niche PS4 games that aren't available at any stores in my area:

I think this may be in-store only...