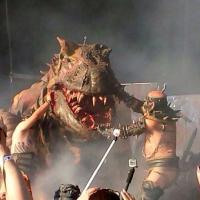 Guardians of the Galaxy RPG with great reviews and no IAP is now free!!!

I'll take a stab at Hitman Go. Reminds me a bit of Metal Gear Ac!d 2, which I loved.

I have 2 Expedia-bought flights upcoming and don't yet own Rayman Fiesta Run. Double win!

It's not on sale or anything, but if you've ever seriously wanted to learn Japanese, the app Human Japanese is awesome. I've been using it daily for almost a year now, after casually toying with it. It's really great. I'm about 15 chapters into the Intermediate sequel and I know an amazing amount, learned the proper way. About 6 months ago, they updated it to add points for correct answers and leveling up. I especially recommend it for iPad.

Callys Caves 2 is a neat looking "Metroidvania" game with a female protagonist, promised difficulty, and the price tag of free.

I haven't tried it out, but look forward to doing so.

Fingle, the intriguing multiplayer (on same iPad) iPad game is currently free - possibly for the first time ever?!

I feel the same way. Part of me is like: Playing the first one will finally get you to play all your Persona games you've only either dabbled in or not played at all! The other, bigger part of me then smacks that part, and reminds it of all the JRPGs in my backlog.

Any comments on Calculords? I love Seanbaby, but don't like CCG, but the math aspect is really interesting.

"DTA, you Hanes-wearing son-of-a-bitch! Dunk Through Anyone!"

Here's Raiden Legacy's page. Look at the bottom for other apps from them: http://appshopper.co...s/raiden-legacy

Culver City has a few good games - 1 each Saints Row 3, RE Archives Wii and Hitman 360. There was a Skylancers starter kit but not sure for what system - a Nintendo one, I think. Also literally dozens of that Cubix Ninja or whatever and Splinter Cell 3DS. I inspired a dude to grab the one Mass Effect 3. He also got a Left 4 Dead. Meanwhile, I got about 6 bags of wasabi edamame, a 4-pack of Dial bar soap, and some Ghirardelli brownie mix to make my wife some Valentine's sweets.

I stopped by the West LA Big Lots the other day, and found zero games. They're putting in an aisle of refrigerator units, though, for chilled food. Interesting.

Allow me to recommend you play Threes. It is crazy fun/addictive. Got my $2 worth, and I just bought it a day or two ago. The description didn't impress me, but the reviews did. Lots of friends playing it, too. I suggest you join us.