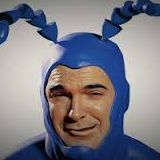 chipzilla hasn't added any friends yet.

I have a PS4 Pro with first gen VR hooked up to an older Panasonic 3D plasma thru a receiver and have the same issue. Screen goes black for a couple of seconds not too long after booting up (and only once per session). I used to have a launch PS4 with the same setup and never had this happen. I don't believe it started happening right after replacing it with the Pro either, otherwise I would have suspected that of being faulty. It seems to have been going on for a while now though. I know both the Pro and VR have been updated since the current setup, so I suspect it started happening after an update to either or both.