They gave me an N-Gage


I would be happy to get N-gage stuff...

Still going on.. looks like it will be a monthly promotion, so probably last for another week or two. Slim pickings until they run another trade promo is my guess.

That is weird, I was able to get a price match to their own website in-store, so maybe there exists a skilled GS employee that could make it work with the 4/$40, but usually I try and bring up 6-7 games to the register to actually buy 4 because half the time the stock doesn't match the shelves and after the holidays there is only one employee with a store full of customers 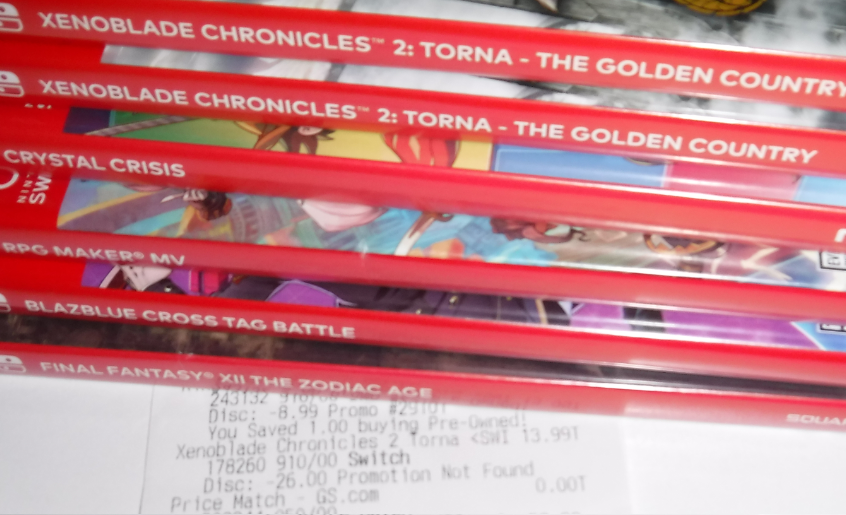 From my past experience a price adjustment with something above the threshold for one of these promos i.e. above $10 or $20 down will not automatically trigger the deal. I have always been denied the "double adjustment". Your receipt looks like it did not drop the Torna price to $10. I also got a price match on Torna recently, but did not try to get it with 3 other under $20 so it very well could be working. I would be cool to know if it does work, but it has not worked for me in the past. Nice haul by the way...

Is this just an error or did this game just got delisted?

They still owe us the Ps Vita version that was prommised as cross buy and never happened. Don't buy it (not that you can anyway...). Also the game is mediocre.

I have not played them yet but Himno, Mekabolt, foxyland, Warlock Towers, Just Ignore Them are all 49 cents and sound interesting. Devious Dungeon and One More Dungeon are 79 cents and were both Play Asia physical releases.

There's always these weird edge-cases where it seems the quality of the game is secondary to the rarity. Like, I could have bought Godzilla years ago but the reviews are terrible for it.

Then it shoots up in value like this and I start questioning all the reviews, like well maybe they got it wrong, could I still find this fun, what was I missing?

If I come across one at Gamestop or for a reasonable price I'll probably grab it, but that sub-40% meteoritic really makes me wonder how bad this game is.

Reviews are dead on, it is not a good game. First few missions are fun and then it was the same thing over and over and it took forever to move around. I bought it on target clearance and felt it was not even worth the $10 clearance price.

I have so many sealed games I want to play, but cannot bring myself to open them even though I have no intention of selling them. CAG life...

I was actually shocked to see a sealed Cubivore is under a thousand bucks.

I have been getting some better deals on 16 bit Era stuff on ebay. Some of it is back to precoid prices. Auctions are not getting bid up with fewer buyers. I agree it is not the time for frivolous spending, but it has been nice to be priced back in to some things I have wanted for decades.

i banned Pokechaos3. Too much chaos.


I think that was one of the longer runs for the one that shall not be named.

I don't know that it's just scalpers and resellers that would have an issue with reprints. Personally, I have no issue with open preorders and if they want to change their policies on a going forward basis and leave open the possibility of reprints, that would be fine. I do have an issue with retroactively allowing reprints when they have advertised from day one that everything was one and done (at least through LRG).


I could not agree more. What is done is done. Obviously studios can go after reprints based on the contract to revert rights. LRG would be in legal trouble if they did reprints of anything that was guaranteed not to be reprinted by them.

I think that's fair. I will propose this internally as a priority and maybe at the start of 2023 we just knock it out. It's definitely not something we could do before the end of this year with holidays coming up.

Thank you for the advice, I think you made a great case.


Well I am one of the few I am sure that did go through the stress of being online and grabbed every LRG Vita release. I would love to see the full set game go out. I get it will be hard to figure out the next tier but the 100% full set folks that got them direct from LRG should not sit in limbo... You could send us each two one to open and one to keep sealed

As someone that was here at the beginning I appreciate you stopping in. I know this thread has run from praise to toxicity and back over the years, but I do think it is good to keep a presence here.

Because I have to... is there any update on the full set Vita game?
edit guess I should have refreshed before posting.

A refresh in NA would be great, but I imagine that would also mean a further slowdown of releases to catch up? Or at least less ridiculous SKUs?
Ship times need to drop to a month or two for games that already exist digitally to gain confidence back. Titles that aren't released in any form yet, should ship near their digital release, just like standard retail releases. I know there are probably nuances with contracts from game to game, but LRG is big enough now to push for closer releases and in a timely fashion especially since it looks like your company is positioning themselves as more of a traditional publisher now. Otherwise, well, it's like we've been saying throughout this thread for a couple of years now, it looks unsustainable from the outside.

As someone that also has a hand in shipping our company's product, profit on your shipping was never a concern to me personally, but it is always good to hear living wages are being paid to staff no matter what company it is.


I would honestly prefer the physical versions after the publishers have patched their broken launch day games. Almost everything gets a post launch patch and I would prefer a final version on disc over needing to download an update. If you have to download updates and patches to play it kind of defeats the point of limited physical releases.

No PSVR backward compatibility... wow, that's a kick in the nuts.

I wonder how many developers will try to release versions of their games to get them to work with the new hardware, you'd imagine that's going to take some work... but man... I know I have invested a good bit into VR games and to know that they will only work with the old hardware kind of sucks.

Crap, I have been grabbing Psvr games on the cheap assuming they would work on the redesign. Lots of these were on the GS 4 for $20 list. I will probably hold on in case there are free upgrades, but this makes me way less likely to buy the new system.

As much as I can appreciate why BB is trying to do this with Total Tech, it really seems like BB is rolling this out terribly while angering many of its most loyal shoppers.


I had already qualified for Elite Plus through the end of 2023 and had it taken away so yeah this situation is BS. No way I would ever pay for total tech after this.