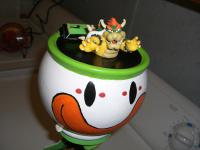 Nesmaniac hasn't added any friends yet.

This is not a game that is going to go on sale, and you are highly unlikely to see anyone selling it for less than $60 second hand. And after March 2021, the prices will only go up from resellers. So either way, if you wanted the game regardless of the pins, you would have had to pay full retail price at minimum. The cheapest you'll find it is at Walmart for $50 like they do with most of their games. The only thing that happened here is that you bought it maybe a little earlier than you wanted for a chance at the pins.

I like everyone else it seems don't care so much about the pins as the time spent trying to get them when Nintendo knew that very few would get them. It's just bad to offer something like this and not having nearly enough for everyone who got the game to be able to get the pins. They should have just sold the pins at $29.99 a set if they were going to be so limited, or possibly much higher if what I hear about ebay prices is true. Better yet just sell a limited edition of the game at a higher price with the pins. Nintendo wants that site traffic though apparently but I don't see wasting anymore of my time on there anytime soon as least.

Ok I took the time to get on nintendo community forums and lots of people complaining about the pins. I can live without the pins but it's just how poorly it was handled that upsets me so I shared my thoughts on a couple of the post.

I registered my physical copy of the game yesterday and it said it would take 24-48 hours for the points to show up which would be the final thing I needed for the pins. So I got on a few mins ago and can't believe the damn pins are no longer available. I would have thought Nintendo would have had as many pin sets available as they do games but seems they made 7 or 8 sets. I'm not going to lie it pisses me off. Might not buy new game again just wait til I find a copy at flea market for cheap because lord knows I have big enough backlog anyways but the pin set was a nice little perk to buy the game. Bad business Nintendo if you offer something at least stand behind it and wasted my time completing the other crap too. Won't waste anymore time on there. People should email Nintendo about it otherwise nothing will change. Honestly not sure I feel like wasting anymore time trying to get a company to do what it should have done to begin with.

Read the numbers of PS4's that sold in 2013 and it was like 6 million and at $399.99, fast forward to today and sony says they going to have double that (some say even 15 million) so with a $299.99 xbox series S, a $499.99 Xbox series X, and switches selling like crazy I think odds of being able to get a PS5 in store Nov and Dec are pretty good but I don't blame anyone who is getting a pre order for doing so because who knows. Gaming stuff is on fire right now hottest I've ever seen it.

UPS just dropped my copy off about an hour ago which I had pre ordered on Best Buy as soon as it went up. So much entertainment in one package that can be played on the go or the big screen. Awesome!