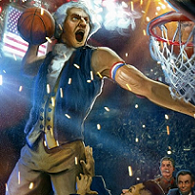 That’s actually really good, assuming you don’t own most of it. And Atari Vault comes with the 2600 version of Basic Math. Basic Math, you guys!

Not too bad of a bundle actually.

And that's also on the Unreal Engine 4.

The game runs smooth for me overall at 60 fps or above uncapped. I was more or less just nitpicking anything above 60. Now I'm curious so I might check what 1080p would run at later. I'm just glad I'm not playing on a console though. RIP

Speaking of, I need to check out Gears 4/5. I've heard good things.

If you don't mind me asking - what's the specs on your PC?

I have the frame rate capped at 60 fps due to the variable frame rate received in different locations, thus the game needing some optimizing. Could be on Nvidia's side with drivers or could be something with the Unreal 4 Engine. If I run uncapped I seem to avg anywhere between 70 to 90 fps depending on the map. So there is some frame bounce, but only above 60 fps. I might play around with some setting stuff down the road, but capped 60 fps looks and runs good enough.

The only stuttering / slowdowns I've noticed are when you load into a new map. The game revs up from 1 to 60 fps in a few seconds once most of the map loads, not terrible but it could be better. It's not game breaking by any means, just a small annoyance.

Just back from a CAG hiatus to report that playing BL3 on PC is pretty awesome and highly enjoyable (even if it's on EPIC). Runs smoother than past BL titles, movement & combat are great, better gun play, and sliding & edge climbing are vast BL game improvements. The game looks better than BL2 as well (because TPS didn't really exist), just enough to notice. I've had no crashes at all so far with a capped 60fps at 1440p on high settings. Although, the game could use some optimizing for better overall performance.

The new characters are fun to play and the skill trees add the variety that's needed in a loot pinata game like this. I think Zane is currently my favorite, but it seems most people are playing as FL4K.

Are there some things BL3 needs to fix, uh yes. Shared Vault space needs a big increase, browsing your map is awkward and slow, slight delay after a gun swap for scope zooming could feel better/faster, and enemy scaling feels a bit off, because if you're over leveled the loot drops are 1-2 levels below your current level even if the Boss is at your level. However, the weapon's level feels less burdensome than past games, but it's still kind of annoying.

Those would be my biggest issues with the game so far. I'm likely more than halfway through my first play through of the campaign and the story is fine/good. The humor is typical Borderlands style, so just enough to make me chuckle at times or either raise an eyebrow and shake my head.

I decided not to wait on picking up BL3 next March/April on Steam mainly due to some anticipated releases around that same time frame. Plus, I usually have less time to game during the Spring. I also took advantage of the BL3 pre-order for 18% off at GMG + the Rakuten Ebates return, so that helped with the decision.

TL;DR - BL3 is great fun, but could use some fixes.

Is money actually somewhat valuable this time around or is it just an afterthought like it was in BL1 and BL2?

Money is worth a damn this time around as it's now used to upgrade ammo and backpack/vault slot capacity from Marcus. Eridium is used to buy cosmetics and to use on a specific vending machine to buy gear with anointed perks. Essentially, character specific perks. I plan to not spend any until I reach the max level cap. I think I'm sitting at round 798 Eridium so far by just playing the game.

So... it's a big enough game, but it doesn't come with the DLC. Got it. That should narrow it down.

Is the neptunia bundle all 1 key?

There's a separate Steam key for everything listed below:

Haha... this brings me great joy for some reason.

I'm honestly not understanding the 1.5 comparisons. It doesn't play the same, need to use cover, less healing is available, issues with movement have been dealt with, new skills, skills don't happen as often, and the biggest thing is a new map (which is bigger with more playable space), and all new missions. Even the side activities have changed. Story, we are going to disagree but I didn't and still don't feel like the story has ever taken a back seat in the game(s).

I see a sequel that sticks very close to what made the original compelling while moving on from what didn't really work.

Agreed. After putting in hundreds of hours in the original Division from what I've seen of Division 2 it plays like a true sequel and not some expansion. There are a plethora of changes and differences to almost all aspects of the game. Anyone calling it Division 1.5 is going for that hot take route.

I picked up Destiny 2: Forsaken for 20 bucks last week and been having a blast while becoming completely addicted again.  They fixed so many of the issues people had with the base game.  Now there are RNG gun perks (unique spec combos, "god rolls"), automatic high-powered engram drops (your weekly upgrades aren't capped anymore), exotics can drop anywhere, epic shaders drop everywhere, and Gambit is awesome.   That Activision stench is already wearing off.  Destiny 2 is in a better state than it has ever been before.

God dammit.  There goes all hope I had for this game in just a single sentence.  These fucking publishers I swear to god.

Anthem was going to be one of the ~2 games I was going to day1 this year too.  EA obviously didn't even learn anything from the Star Wars Battlefront II public relations fiasco.

Destiny 2: Forsaken is the best version of Destiny 2 to date. There's a gargantuan difference and highly better experience between the D2 launch and Forsaken. I'm glad you ended up giving it a shot. Enjoy the grind.

As for Anthem and cosmetics, it's all still speculation. The demo featured super cheap cosmetics and now we see a leaked photo of beyond ridiculous pricey cosmetics. So who knows. I suppose since it's EA we can assume the worst, but getting worked up over speculation is a waste of energy. Probably best to wait on something more official before grabbing a pitchfork, but we are a highly reactionary society.

it was in my browser history :P

The Steam bypass has been patched, but the GPU check workaround might still be working.

Has Destiny 2 even caught on, on PC?  I know plenty about the game but afaik you're still better off playing with your existing friends, or else playing on console for the much larger playerbase.

I know people here are of the "everything is better on PC" mindset.  To which I strongly disagree when it comes to many online multiplayer FPS.  PC players cheat.  It's stupid.  It's really dumb every time I load up a mp shooter and there is at least one guy in the lobby cheating.  It has been going on forever and I find many FPS more enjoyable on the couch with a controller.  Especially games where you play marathon sessions like Destiny.  I have been playing BF V for several weeks now and there are cheaters constantly.  It gets old.  It got old years ago.

Is Destiny 2 on PC even really a thing?  It seems like people just play through it and then quit. Which would make sense if the endgame and PVP just plain suck because of the PC climate.

Ignorance isn't a good look on you, but let me give it a whirl.

Has Overwatch even caught on, on PC? I've played the game a few times but it seems boring without friends. Is Overwatch on PC even really a thing? It seems like people just get hooked on collecting loot box items or griefing other teams. Which would make sense if the player base seems bored and toxic on PC.

Well, that was fun.

So....does this mean Destiny 2 will stay on Battle.Net?
Or can Bungie re-release and put Destiny 2 on Steam?

Destiny 2 will stay on Battle.net and I don't see Bungie moving launchers unless highly motivated. At this point in time with competition coming from EPIC, Steam isn't the only golden goose.

As for DLC/Expansion Pass/Annual Pass I don't believe they'll go away, which I'm actually fine with especially if Bungie is now self-producing without Activision. It would be nice to see cosmetic microtransactions removed or changed if Activision was behind that push though.

For now, yes.  Future releases may break away, we shall see.

I might be in the minority but I'm fine with the annual pass route that pushes end-game content releases over the span of a year. The alternative would be monthly subscriptions and for me, that would be a hard pass.

As for raids, I'd rather see new content and new raids. Now if there was a story reason or some tie-in to bring back old raids sure, but old content should probably stay retired. Vault of Glass was so good, so maybe there could be a reason to bring that location back with a Vex expansion? Who knows.

Yeah and you need an intel processor from 2014 or later by the min. system requirements.

This is the first time I've been using a PC build that is now six years old, which sucks.  It has an i5 3570k.  I was looking at the Battlefield 1 requirements last week and saw that you basically needed a 6th gen intel processor (i5-6600k) that is from 2015 or newer.  So what happens when I try to play these games?  I have never really been this far behind the times before.

I played the crap out of Monster Hunter World on PS4, great game, but I likely won't pick it up on PC unless cross save is added (not holding my breath). I poured too much time grinding that game to want to start over from scratch.

Great CPU, I had the same processor in my six year old PC as well. Unfortunately I felt like I was starting to really fall behind with those older hardware specs. I grew tired of having to tweak and sacrifice video setting to get a new game passable at or close to 60FPS. Plus, my old MB was starting to have too many hiccups and random errors/restarts. So I built a new PC (8700k + GTX 1080 combo) back in February after acquiring parts from various Holiday sales. It comes at a cost, but ignoring minimum or suggested specs has been nice.

Monster Hunter World is coming to Steam on August 9th.