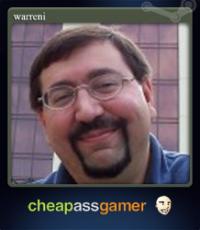 Your post made me realize I remember nothing about that movie other than the ending and Dr. Manhattan’s blue dong.

Then you probably forgot what color Rorschach's dong was. . . .

Looks like a co-op brawler/ARPG type of game....with some Destiny, Division & Godfall influences, but instead a medieval game here set in the D&D World/Universe/Setting.

I watched the trailer and holy crap is that music annoying! Other than that, yeah, I could get behind an ARPG with Drizz't, Wulfgar, Cattie and Bruenor kicking butt.

Since we're on the RPG topic - I need to chop away at some of these, as these are some big games that need to be started and/or completed.

Some of these - like DOS1 & W3, I've started...but never finished. Some of these, never tackled certain expansions and/or DLC's.

So, what do you guys all suggest for RPG's? What do you like the best out of these?

Here's stuff, in my backlog:

I'd put PoE II close to the top of your list. It's really fun. The first game is good too, but the sequel improves on it in many ways.

Kingdom Come is very skippable, IMO. The difficulty is brutal to the point that it makes for a fairly-unpleasant experience. I really wanted to like that game, but . . . .

Personally, I'm waiting for BG3 to get out of Early Access/Developmental Access and actually at least hit Version 1.0. Though, knowing me, I'll probably get it way later, when it's cheaper.

This new Dark Alliance...doesn't look like Dark Alliance. DA was, to me, an isometric ARPG/CRPG looking at being in-the-between hybrid of sorts. I never played it - wish it came to PC, but it never did.

This new Dark Alliance....looks like a mix b/t Destiny, Division, and Godfall all set in D&D-Land.

I dunno - if I need say more of that D2-like isometric-ARPG, I probably should just tackle Grim Dawn; and work on Titan Quest: Anniversary some more. Never finished those - and honestly, I should get to work on those, at some point in time.

Well, if it does turn out that way, I'd be inclined to agree, but I never played the original and I'm not sure we know enough about this iteration to be certain.

I'm already some 20-30 hours into W3: Wild Hunt. Probably barely done main stuff, mostly side stuff. Even though I've had it forever, I often seem to play it for a bit...and then stop. Something else gets in the way.

I do really need to commit to that  game.

Yes, you should definitely move this to the top as well. Sure, it's a huge time-sink, but it's really worth it.

Don't be giving him any ideas now...

One I didn't see on your list was D:OS2. I know you started the first, and I'm guessing it didn't grab you since you didn't stick with it, but the second is so much better imo. It's a really remarkable game. I know I've talked about it before, but I just had a lot of fun with that game because of the variety, the lore, and the breadth of possible ways to approach any given situation. It should be on anyone's short list.

I second this. I thought OS1 wasn't as flexible or as fun as 2.

Game Pass has allowed me to try a number of games I thought I'd like and then realize that I didn't feel like playing them after all. I look forward to adding Nier: Automata to the list alongside Outer Worlds, A Plague Tale: Innocence, Wolfenstein: Youngblood and Doom Eternal.

What I've spent on Game Pass subs, I've made up in not owning those games.

Hm. Well, I really liked The Outer Worlds, but it came out when I had a GP sub converted using that trick where you could get Gold to convert to Ultimate. I wanted to like A Plague Tale--the core idea was interesting, but the execution of the mechanics was awful. I quit after making the wrong turn when trying to escape villagers for the tenth time in the second chapter. Youngblood is pretty decent for what it is, but I'm just not that much of a shooter guy. I agree with your main point, though. I would have been mildly annoyed about spending money on something like A Plague Tale or Mudrunner or Overpass.

Spoiler
I didn't jump on Fuser when it first came out even though I am perennially playing Rock Band 4 and I've played a bunch of RB and Guitar Hero games on PS3. When I read descriptions and reviews, it sounded more annoying than fun and also like something I would be terrible at, but actually I'm terrible at almost every game I actually enjoy playing except for (some) RTS/RPG games. And it was available to demo last weekend via XBONE's "Free Play Days" program. To my surprise, it didn't suck. It's remarkably entertaining and, as reviews have indicated, Harmonix has worked some weird beat-matching magic that allows you to put elements of DMX and Shania Twain together and the result does not sound awful. If you're into this kind of game, it's definitely worth picking up on sale. I wouldn't bother with the VIP edition, though; no matter what kinds of music you're into, the VIP edition is just a giant song pack with a bunch of music you may not like. It's just as easy to go into the DLC store and pick up the ones that you would enjoy on an a-la-carte basis.

Is it possible to experience magic on the Epic game store?

It could be more like B-Studio game like a Piranha Bytes RPG in this era; Reality Pump Game (i.e. Two Worlds); or something from Spiders (i.e. Mars: War Logs) - there might not be something different, interesting, cool and/or special/unique about it...but it's still lacking a bunch of something to take it to the next level.

Likely, that'll probably be these short-comings - the game's a bit repetitive or shallow in some way; voice-acting is "meh"; and/or stilted writing and/or dialogue.

Hm. Interesting. Yep, sounds like a mid-year 50%-off purchase, perhaps.

That what your mom said to me last night.

Wait a second--how many of you are there?!

Apropos of nothing, I'm probably going back to racing games. Nothing seems to be grabbing my interest lately. I fired up ESO the other day and wandered around with no quests to complete for 20 minutes. I played briefly and uninstalled Control, Dead Rising, Nier: Automata, Greedfall, Yakuza 3 Remastered, and Mafia. I'm sort-of playing Maneater on PS4, but it's long stretches of eating small fishes and avoiding alligators, which is also a bit boring. Is Injustice 3 coming out soon? Or something from Wales Interactive that isn't a horror game?