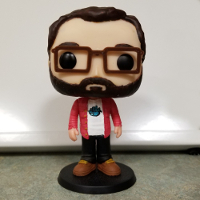 pofigster hasn't added any friends yet.

Thanks guys for putting out this great show! While I don't get to watch you live on Twitch (too late for this dad) but I love the new dynamic it adds to the audio. Keep up the outstanding work, you guys rock.

I'm curious if you guys ever bust out your copies of Switch Game or Not, the card game?

While 5K's may not give out medals for participation, they all give out T-Shirts so you can show off that you run 5k's

I'm shocked though that none of you seem to get what the Epic/Apple situation is really about - this is Epic trying to force an antitrust investigation into Apple. It's not about how much of a cut Apple gets, it's about the anti-competitive practices Apple uses in their App Store and Epic is trying to capitalize on the federal level investigations that are starting to break Apple. Think about the fact that what got Fortnite pulled was that they were telling people where they could go buy V-bucks cheaper. It's Miracle on 34th Street, only every single day and the store fired Santa.

Comparing Epic game store exclusives to Apple's monopoly on iPhones is asinine. When a game goes exclusive it's the game developer who chooses to restrict their market, they're the ones taking away player choice, not Epic. What Apple does is force you to sell everything through them and bans you from telling consumers they could get it cheaper somewhere else. It doesn't even make sense to talk about the fact that Microsoft operates the only store on Xbox because you can buy the game from Target, Best Buy, Walmart, Amazon, some guy on the corner of the street, etc. You can even buy codes for Xbox games from other retailers, Microsoft doesn't even limit digital sales to only through their store. And Microsoft doesn't prevent companies from directing you to use their website to sign-up for accounts.

Hasn't Wombat shared the origin story of his nickname before on the show? Or do he and I just share a psychic connection?

Great show, as usual, though Cheapy was in a weird mood, lots of rape talk and coming down hard on Ship for being totally reasonable and responsible during the pandemic.

Like many of you I'm sure, "Switch Game or Not" has been one of my favorite segments on the show lately. It's hard to play though because we don't necessarily have the list of releases in front of us and I don't want to stop the fun that is listening to the show. So, I made a version of the game you can play anytime, anywhere. http://switchgameornot.com is a little app I threw together that uses AI generated fake game names to try and confuse you. So, have fun and if you have any CC, I'd love to hear it.