SeasonalCAG I Know I Know Desktops Are Better!

Where MysterD fails (probably a BernieCat supporter) I always have your back TrumpCat: commander in cat no matter what people say.

I have the 17inch version of this laptop that I bought for a four month trip and now for a 7 week one. I love it the only difference with the one I'm going to post is it is return, the screen size and 1tb hdd instead of two. Played DMC5, Div2 and other older titles ran no problem.

Frogs and Focus aside...

Anyone have suggestions on apps to test/benchmark DX12 performance/Real Time tracings? Ideally, the card should perform at/near the top of the modern gpu heap, but, as always, I'm paranoid about product quality and don't want to overclock too high/push it too hard.

3DMark Time Spy (use it to see my cpu and gpu scores against others) does DX12 and Port Royal does RTX (haven't bought or used it yet) benchmarking.
MSI Afterburner or EVGA Precision X1 (cause of my card I have now) for overclocking.
Asus RealBench is my stress/stability test
Others I use sometimes:
Heaven to check my fps / Cinebench when I lie to myself that I will do something besides game

This video was in my recommended watchlist and made me think to reply to you most of the things are basic but has some things to help anyone with a gpu...

TheHangOut brohs got me looking for animated posters for the Steam beta client here is what I got so far:

Summon your inner headpiece747 and post some pictures of your creation.

SeasonalCAG Rise from your Grave and Rescue my Hardware:

Long time no upgrade I have been wanted to upgrade for so long but overpriced CPU, GPU and Ram prices were keeping me away. Then I was away for 4 months and saved up and my wifey talked me into buying this because I had a coupon and no tax well she doesn't know what she started... 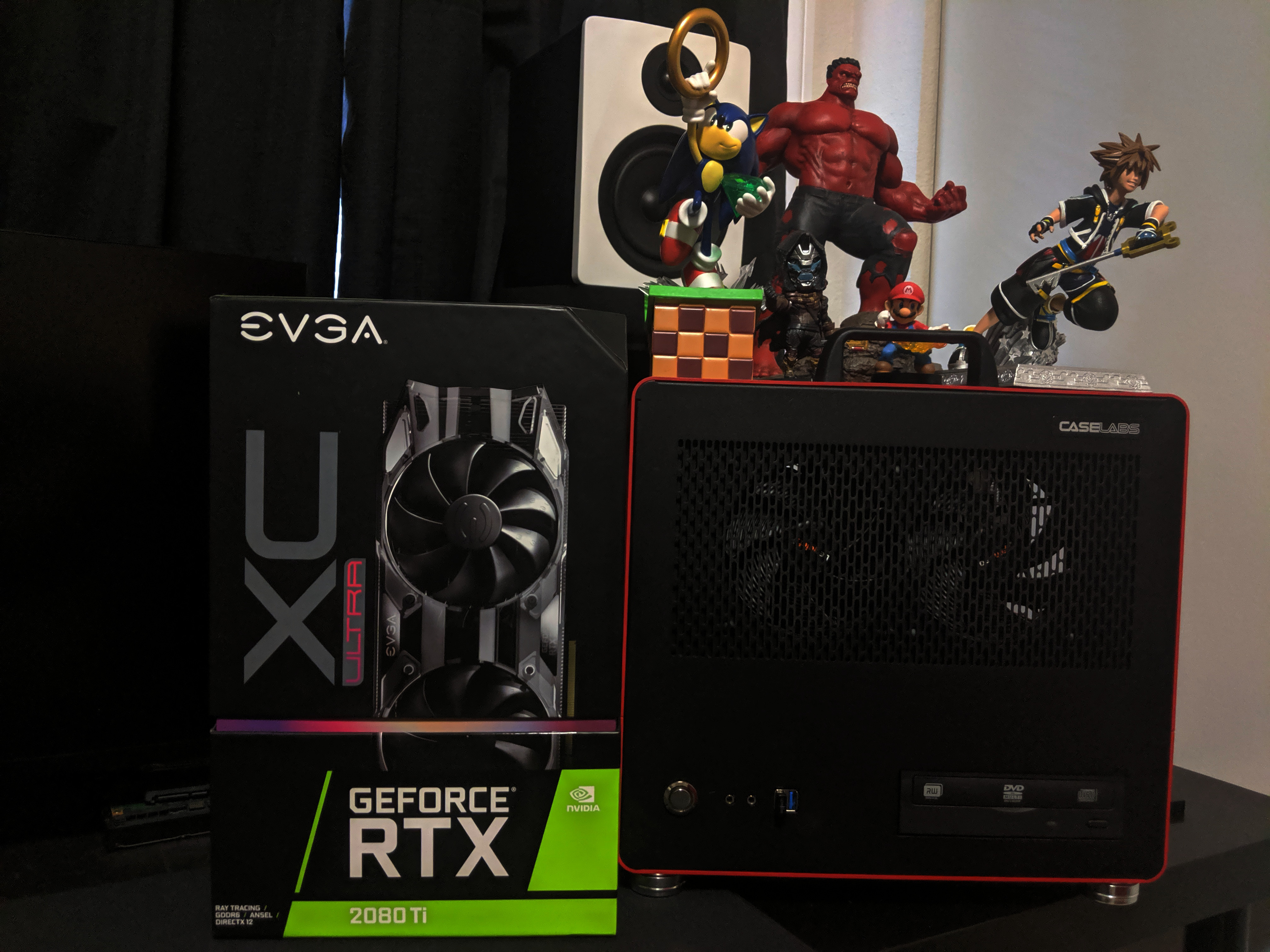 Then Trav called me out on my rat's nest at the bottom of the case so cleaned it, removed two old 250 SSDs and 2TB HDD because tired of all the cables. Left the 1TB Samsung 860 and added two Silenx 80mm fans and Thermaltake Toughpower Grand RGB 850W. 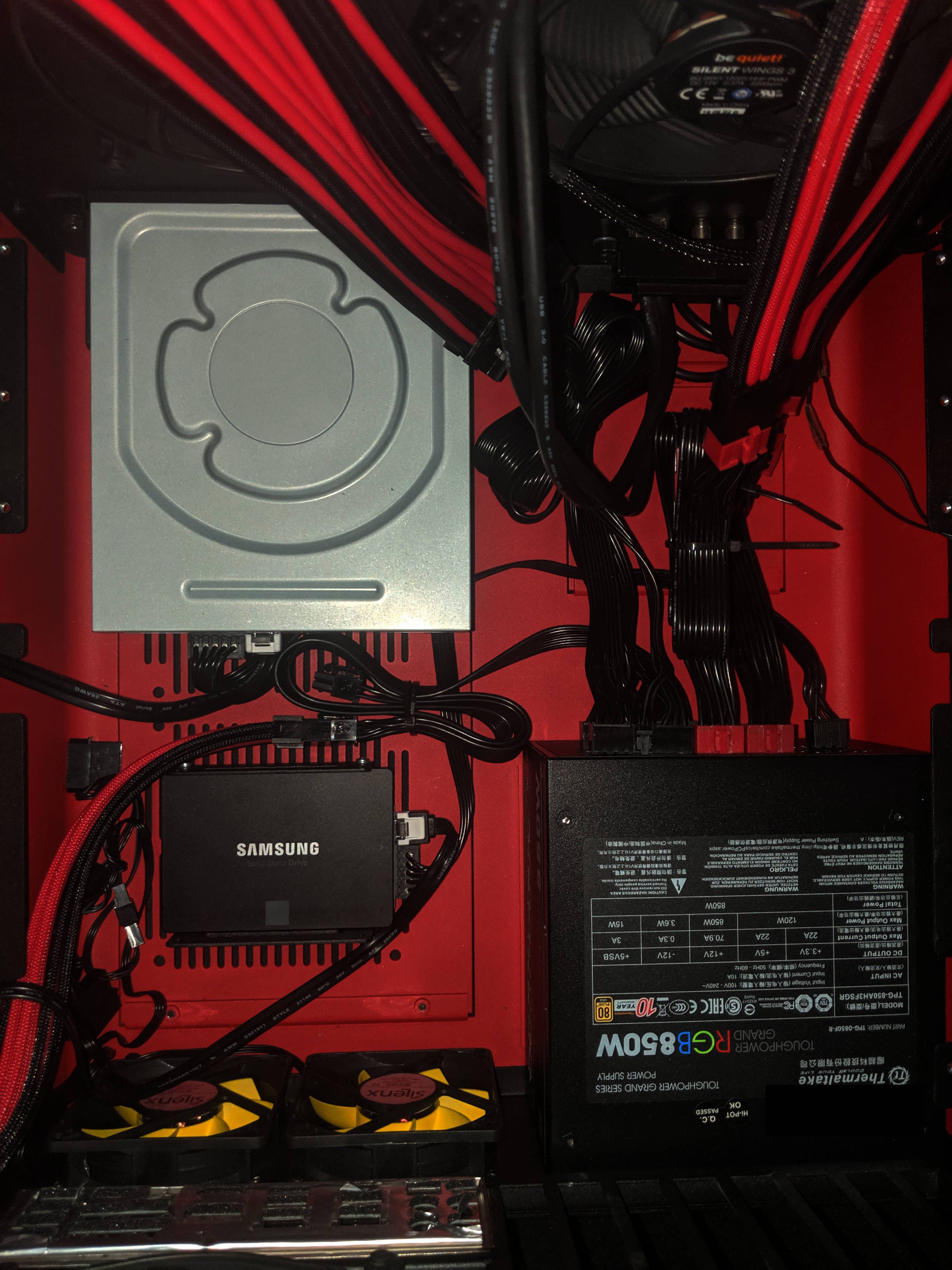 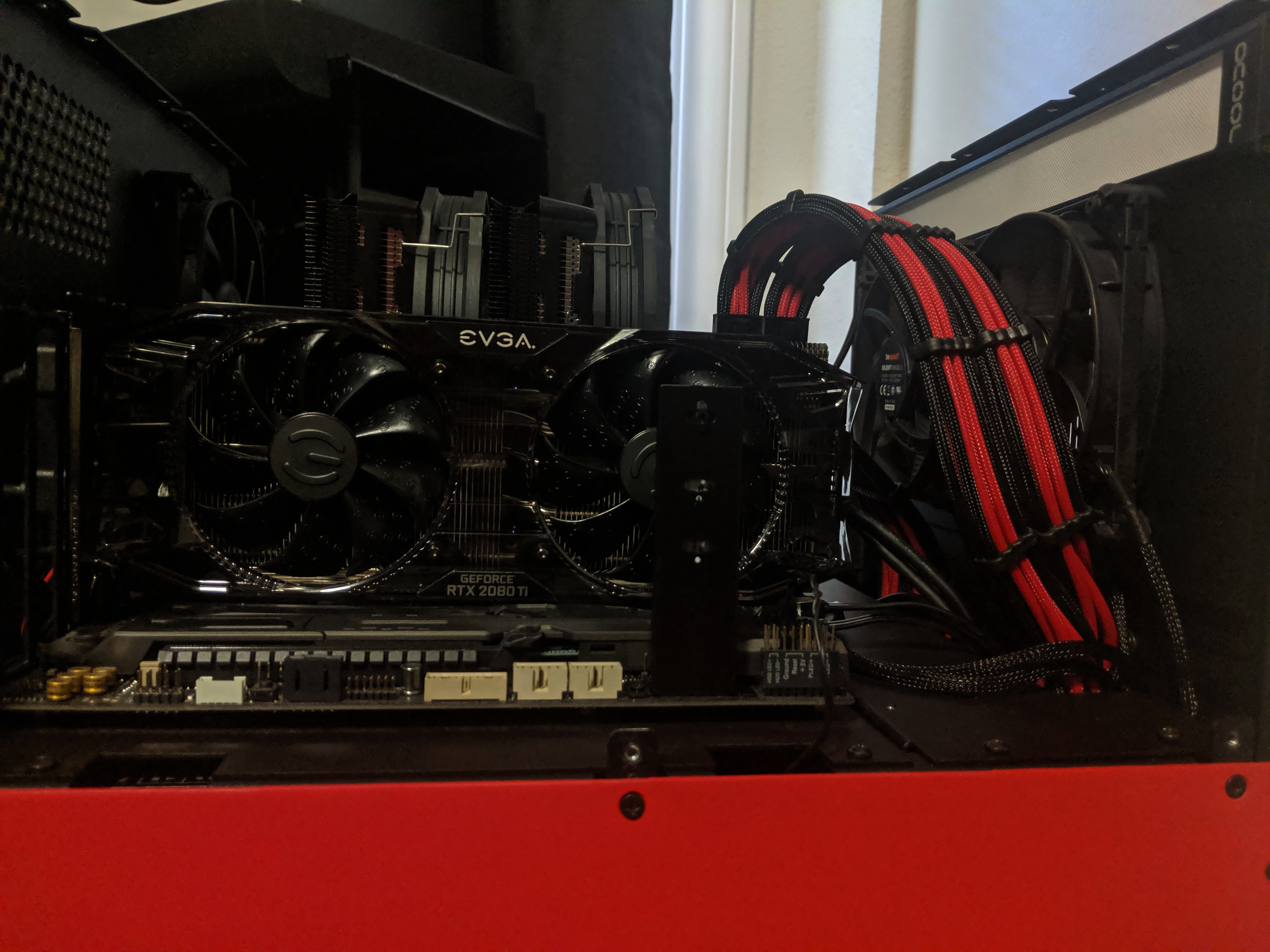 Still waiting for AMD to fix issues with 3900x and X570 and mobo fans are a turn off unless I go for that Gigabyte $500 one or Intel drops the price on 9900k to compete and will get that because all I do is game and browse so don't have to lie to myself and say I want it for media creation or streaming just chasing FPS.

Nice dude, I was looking at that laptop for the same reason. Ended up getting a Lenovo though. How is the heat dispersion on it? I hear the Overpowered brand gets really hot when gaming.

Also it seems everyone needs more cheering up around these parts, Beta Dwarf Entertainment put up their post how their company started on imgur:
https://imgur.com/a/QN6zUT3

So have been in a hotel for about 4 months because of work and thought I would show off my gaming/work setup to get me through the boring times. Was using the G502 wired and forgot how much I loved this mouse (G902 wireless is my home mouse) so when the G502 Wireless was announced knew I had to get it. Drabe (the man, the myth, the legend) hooked me up with a Logitech.com 20% code so it was a done deal just got it today and it is perfect feels the same just no wire drag and feels lighter.

Finished DMC 5, Watch Dogs and ongoing Division 2 apparel chasing. Tried to get into the Div2 raid with LFG randoms and they all rage quit after they died the first time and haven't tried since. If CAG/DC Defenders wants to try it out let me know.

G502 Wireless (Needed this in my life)

Red Xbone Controller (Favorite color had to bring it) 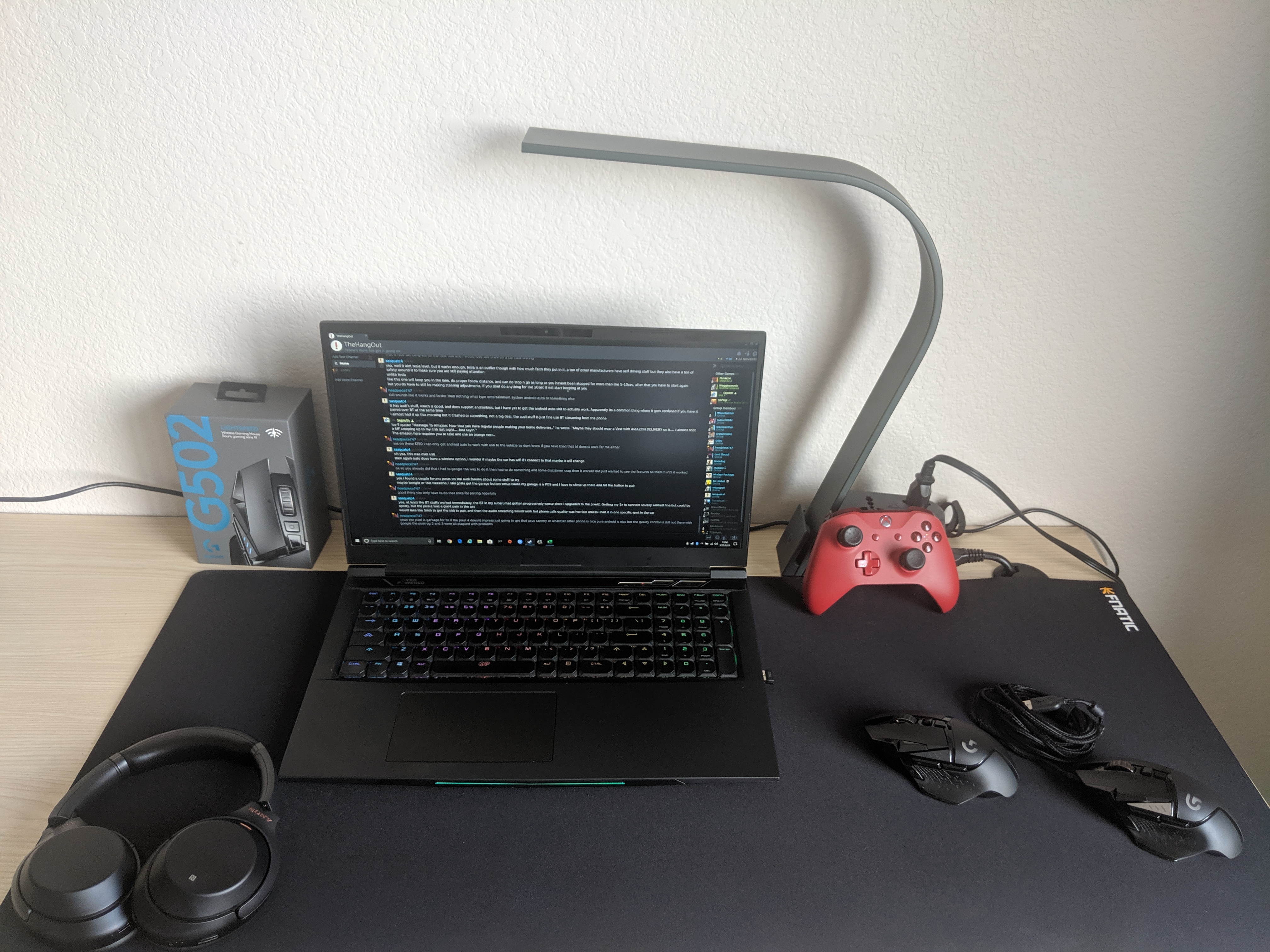 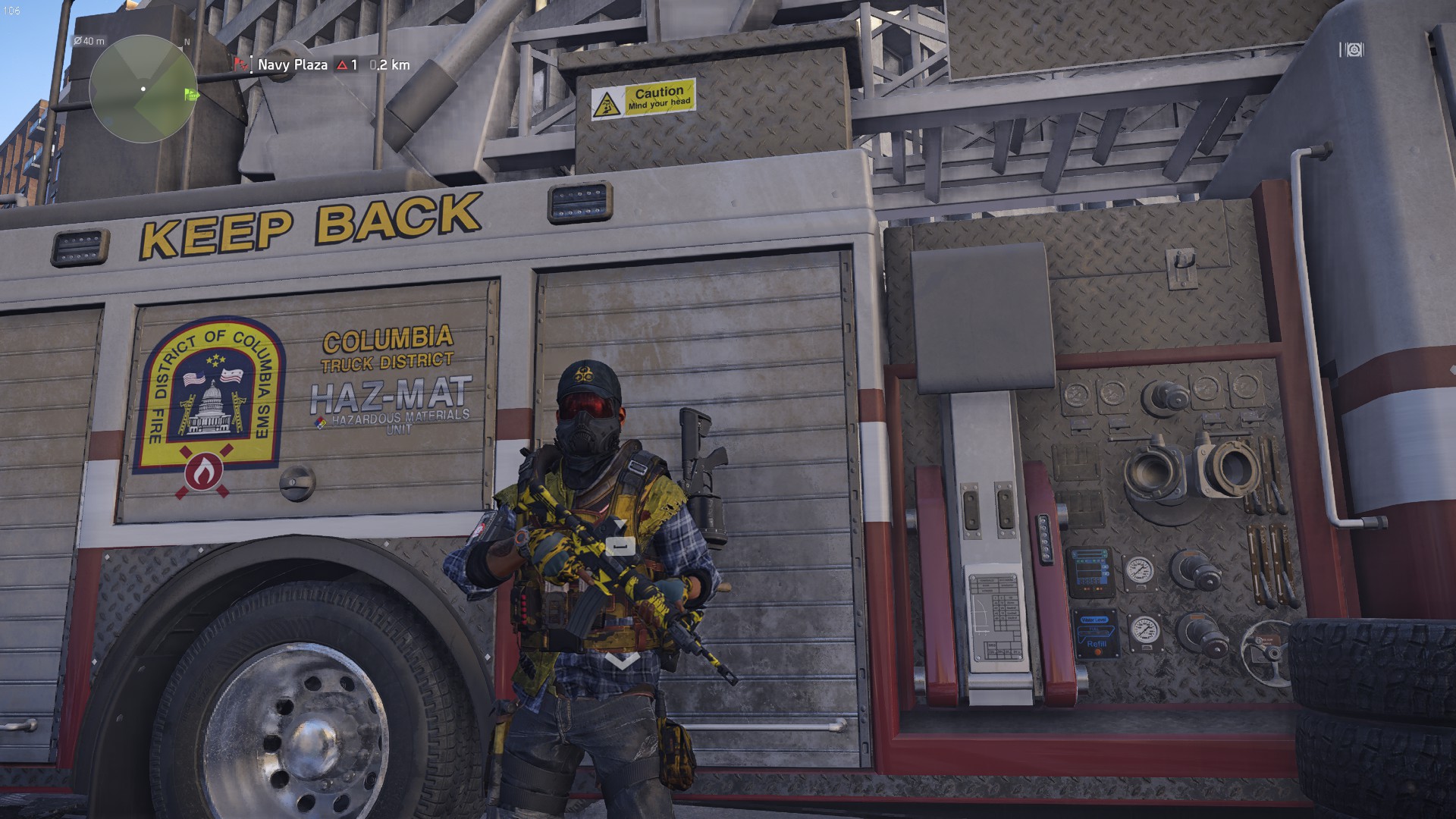 also does anyone know how an Intel/Nvidia loser like me can get in on the Division 2 for cheap? like from one of those AMD codes.

SeasonalCAG I hope we feel like this forever, Forever, forever ever? Forever ever?:

I know I have made this idle threat before but this is the first time ever since Steam Holiday Sales have started that I didn't buy one game for myself.

Pizza Hunt! How to hunt pizza (And Not Die Doing It) x11 for TheHangOut brohs

Legendary for Barter.vg trade I couldn't find the key for

I guess for RDR2 can't wait for pc brohs to play this it's as good as I thought it would be upgraded to my Xbox One S and 1080p TV to Xbox One X and 4k TV for it.

This is the game every CAG should have at the end of this sale...

Pizza Hunt! How to hunt pizza (And Not Die Doing It)

I'm still using a 120 gig (I think.. maybe 160?  I dunno) iPod classic.  I need to find a solution that will allow me to play both FLAC and MP3 files.   I'd like the ability to play lossless and I figure my iPod is going to croak out on me one of these days anyway, that thing has had some serious use.  Surprised it is still going, tbh.  Looked a little but I just see a lot of cheap stuff that looks awful and $$$ stuff with super mixed reviews.  And my smartphone is too big/bulky to even consider as an option.

Guess I need to start checking on Massdrop and see if any of the stuff that pops up there seems good.  My music collection is rather ridiculous despite me only vaguely paying attention for years now and lack of storage and irritations with itunes is part of why I haven't been more active in seeking out new stuff.

Here are some DAPs to get you started just know you will go down a rabbit hole: Shanling M0, HiBy R3 and FiiO M7.

Rockbox FTW.  I had an old IPod that I got Rockbox loaded on and loved it.  Played anything you could throw at it.

I'm really not much of a mobile listener, so I ended up putting the thing on ebay - (also had an upgraded 240 GB Hard drive).  But I would love a DAP with 1TB+ of storage, bluetooth, no mechanical hard drive and Rockbox compatible.  Or at least plays gapless FLAC/MP3.

What are the specs on that Sony?

You're right my bad.

Man, the Sansa Clip+ was such a terrific budget MP3 player. Still use one when running or doing yard work. Excellent battery life. I'll be disappointed whenever it bites the dust because it's been so reliable for so many years.

Yeah after discovering Rockbox for it years ago it still is a beast and lost mine awhile ago so had to steal my wifey that she hadn't used in years.

Don't where I fall on this digital vs. physical debate but just added this to the collection... 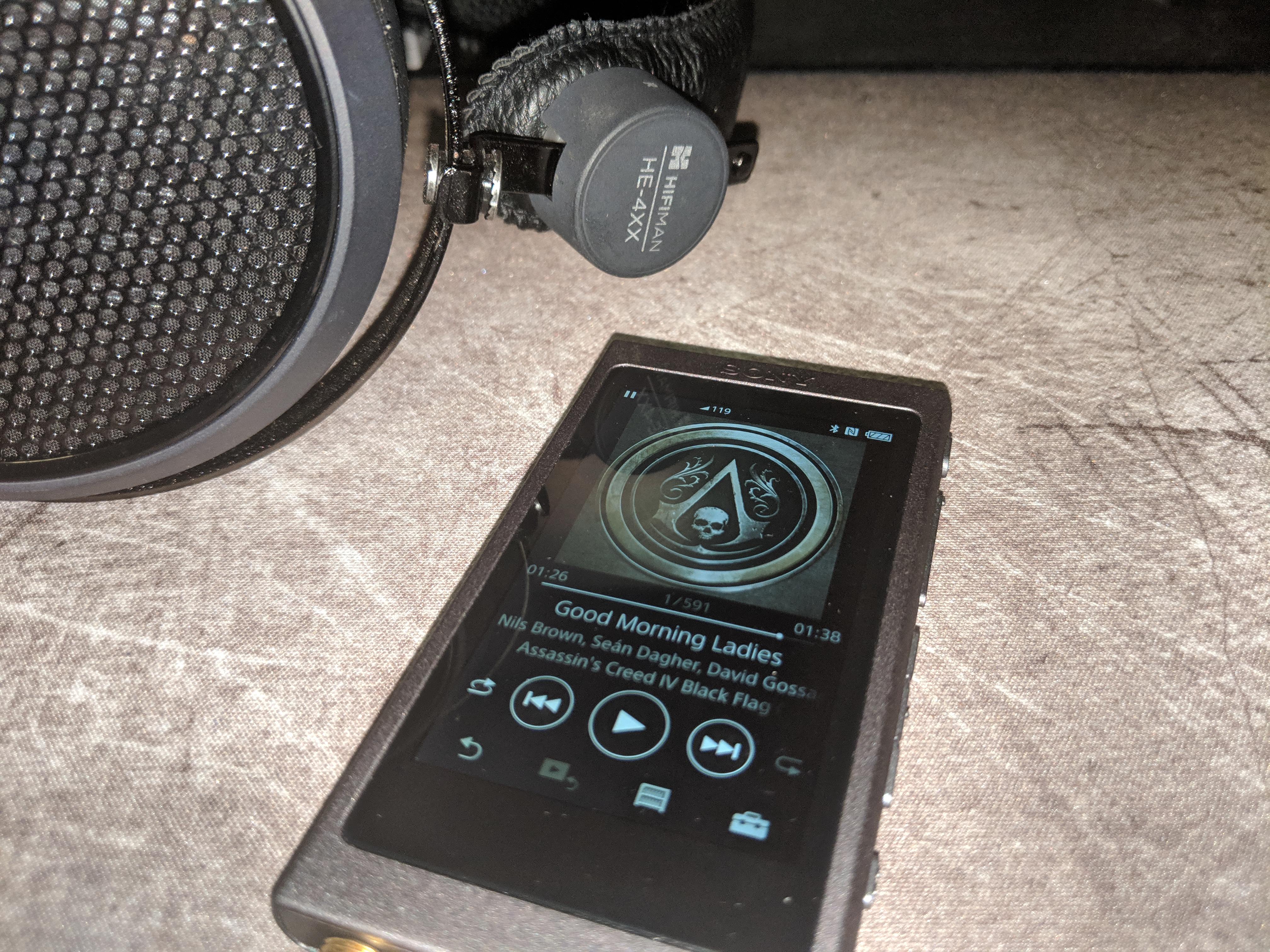 Sony NW-A45 digital audio player might be closest I can get to an updated Zune HD love that thing... 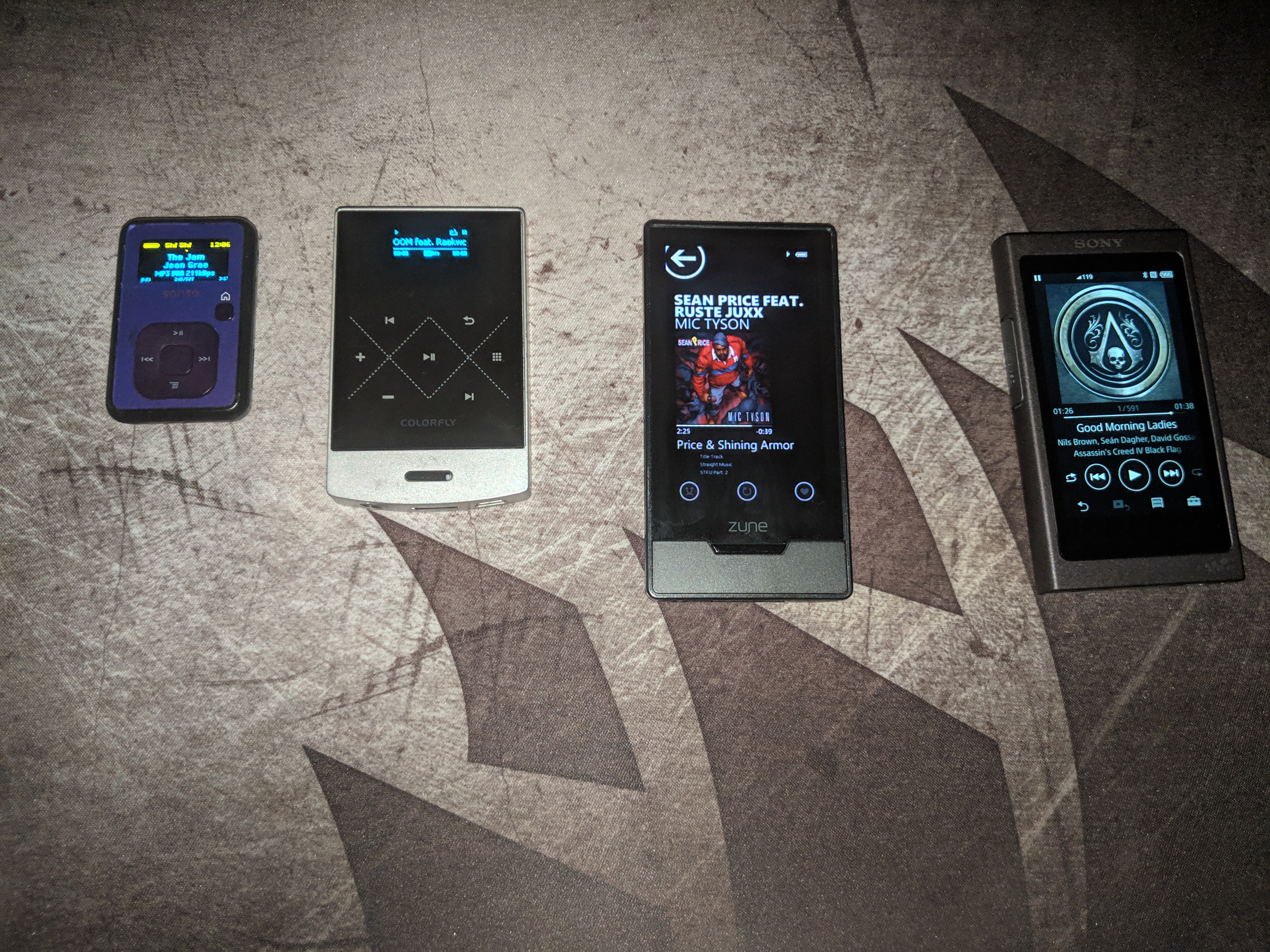 Seriously though can't we all just get along. I have Google Play Music for streaming, Records for my turnables, CDs that rip to FLAC or MP3 or buy (yes people still buy music) for those guys above and use it all.

I have a Raspberry Pi for unspoken gaming/asf farming, NES classic and NES knockoff with games, Switch, Xbone X and PS4 Pro, N2DSXL, Arcade Cabinet and my custom built PC.

Steam, Origin, Blizz, Uplay, Windows Store and GOG (only free games though) and will buy and pay/play anywhere the games are cheaper or take me.

So picked up this $40 Dynamo Arcade Cabinet from Craigslist... 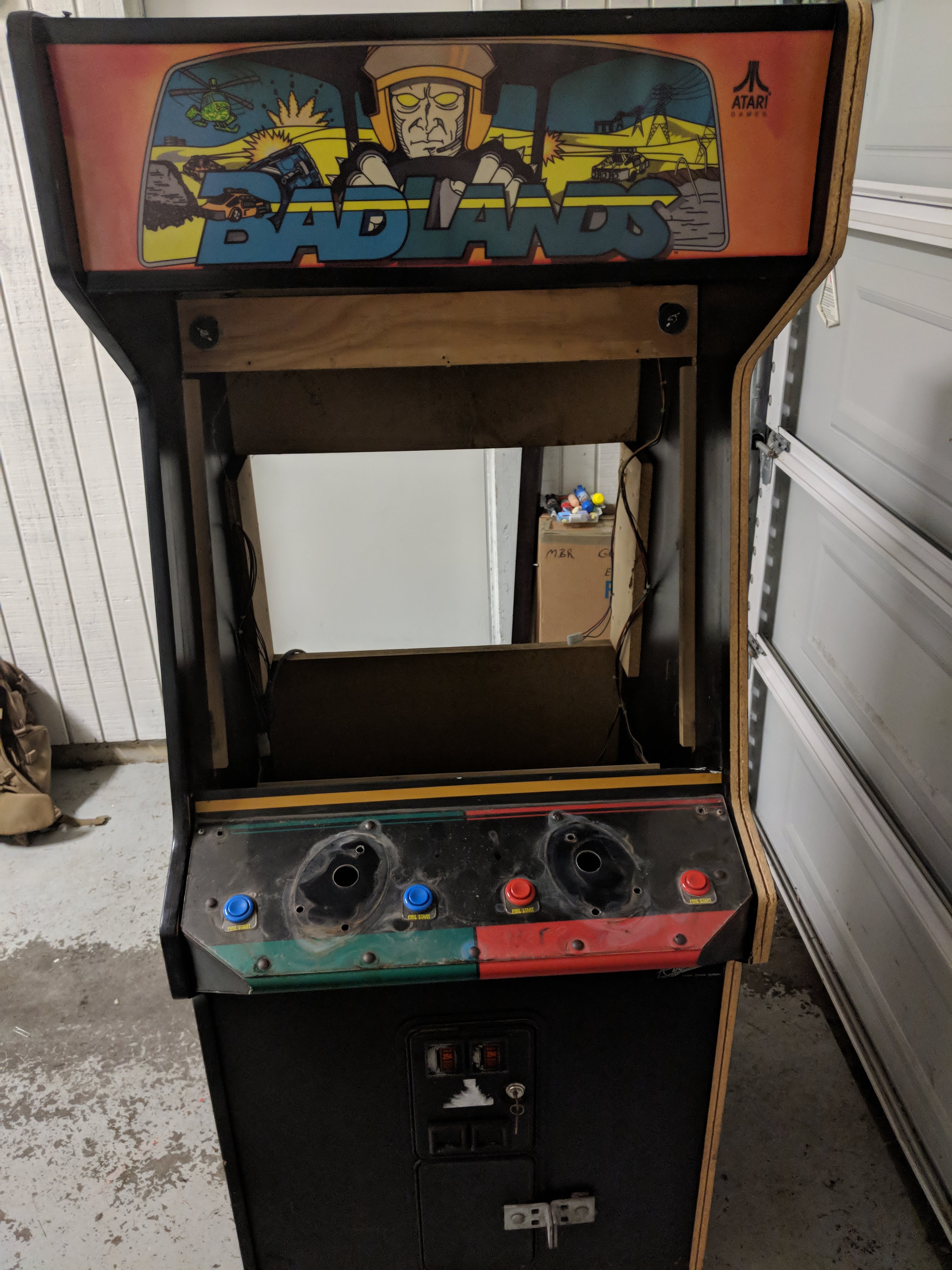 Turned it into this... 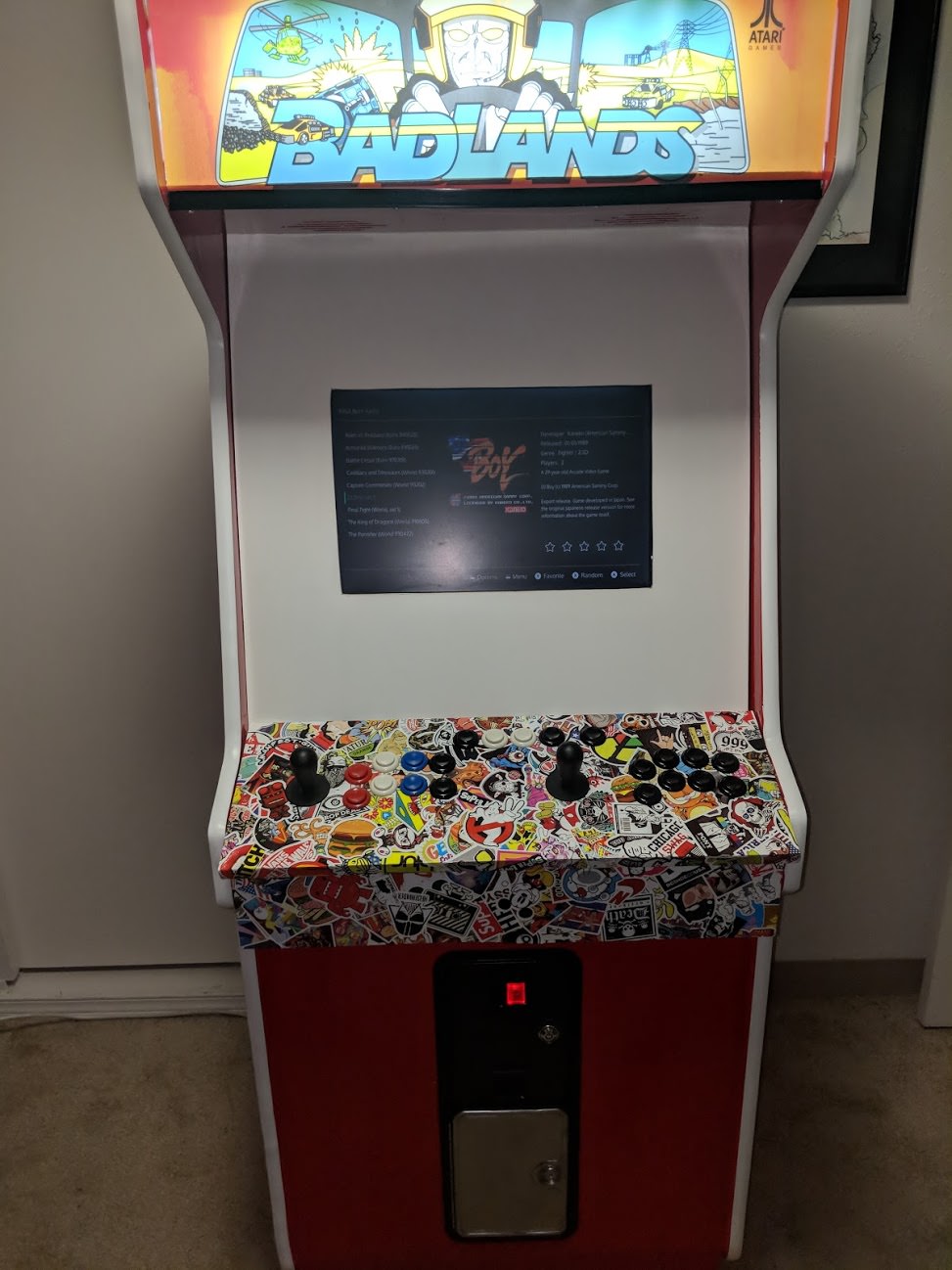 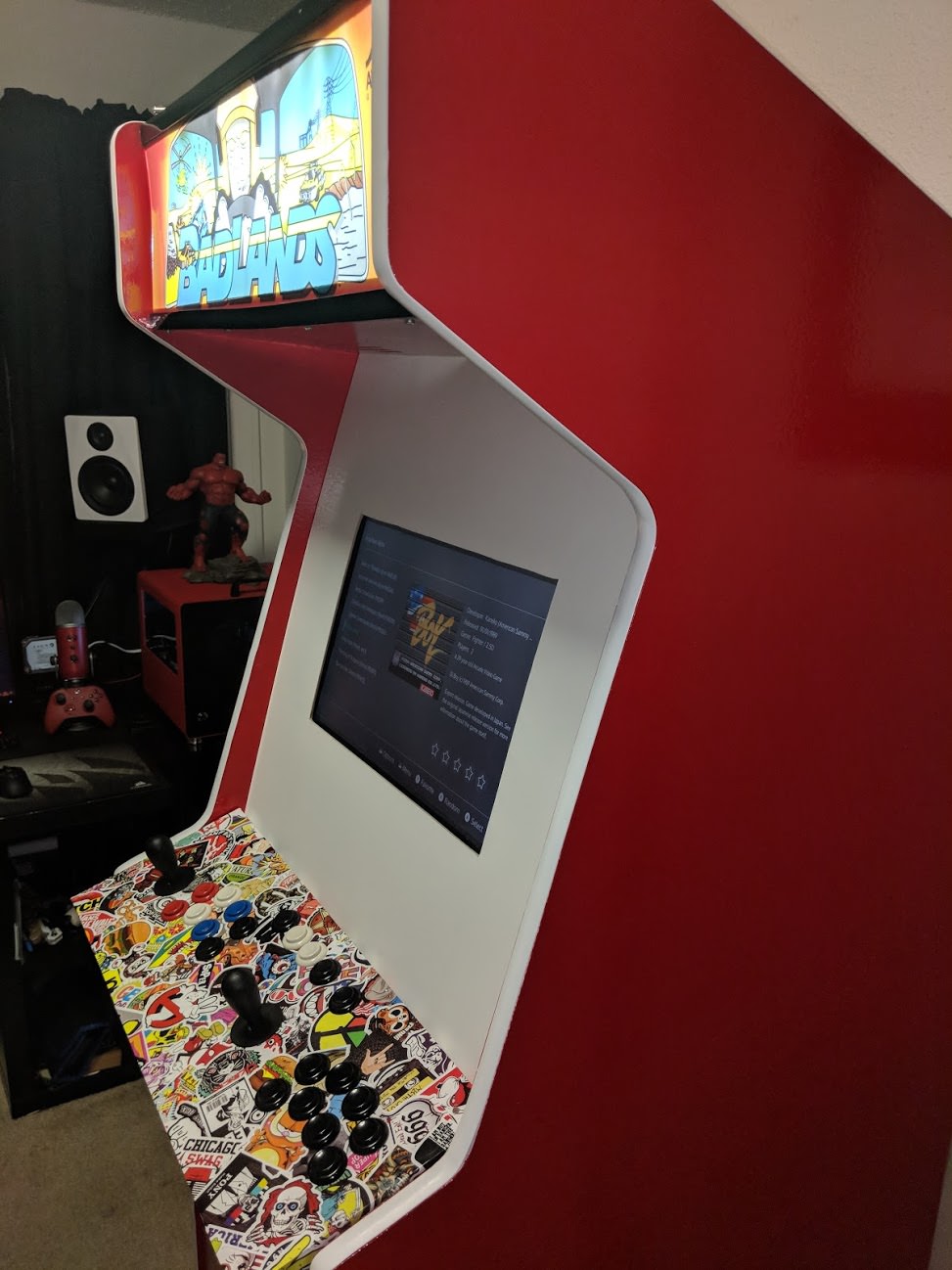 Tried to make it as cheap and as fast as possible so cut a lot of corners (will upgrade some day like my pc) like the small ass spare monitor I have in there and so white hard board for a monitor bezel. All TheHangOut brohs already made fun of that. Drilled some holes in some wood (never let Lowes cut your plywood had to sand away their mistake) and gutted my X-Arcade and threw the Raspberry Pi in it. Chopped up a Logitech usb speakers for the top, added an led strip behind the Badlands marquee and got some white T-molding. Got a cheap X-Arcade coin door from Offerup so it works with X-Arcade joystick and you should have already known it was going to get painted red.

When did this happen? Was it a Pi Zero or a Pi 3? I'd actually like to get some more, and that's a damn steal.

Got it from here it is expired now but popped up a couple of times: https://slickdeals.n...SearchBarV2Algo

So TheHangOut brohs were talking about raspberry pi and how they got them to do things like playing games, servers, etc. So when I saw the eBay Microsoft deal for $14 plus microsd I jumped on it. Setup was a pain since I haven't messed with Linux in awhile. Now I have it running ASF in the background and gaming station in top. So I pulled out my old ass X-Arcade stick and bought some cheap stickers on eBay, sticker bombed it, hit with clear coat and made this: TLDR: I made the Cool Story Bro sticker stand out cause that is how I feel everyone thinks in here and TheHangOut when I post random shet.