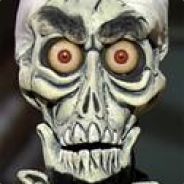 Neato!  Thanks, followed and wish listed!

But that's my point.  I don't think it's the same as Xbox.  Someone else cannot be logged into your account on another PS4 and also log into their account on that PS4 and play a game under their profile can they?  They could only play it under the home PS4 for the owner of the game.  Xbox doesn't matter as long as the owner is logged in whether they are the ones playing the game or not.

I have a house full of kids and it's actually a pain to buy digitally on PS4 if it works that way since they could only play on one of the PS4's in the house.

Everyone in my house plays all of my games  on the upstairs PS4 #1 on their own accounts.

I play what I want on PS4 #2 in the basement which only logs in as me.

Same. Any opinions on the psvr? Are the move controllers worth it?

If you're gonna do PSVR (and I do recommend it) the move controllers are a must.  Not mandatory for all games but make a big difference when supported.

Go back to Page 713 and you should find what you are looking for.

FYI, users set their posts per page so some people don't have a page 713

Not feeling it. Nothing can top Virtua Tennis for me.

Surprisingly, neither am I.  I love the Switch for gaming on the go, but its actually not comfortable to play Mario Aces holding the Switch.  Would probably be fine with controller which I have at home, but ergos not good otherwise

Thanks Frisky, new threads are the best!

I tweeted BandaiNamcoUS but they haven't gotten back to me yet about it. Hopefully they don't just blame their factory and do nothing. My ce # is 15149. I guess I will call them Monday.

I had an issue with one of the Tales CEs I bought loooooong after release when it was discounted 50% at GS.  I contacted BandaiNamco and they sent me a sound track CD.  I was amazed.

Just to ask. Why you didn't like everybody's golf?

Sent from my SM-G950U using Tapatalk

Just to add to everyone's thoughts, I'm ok with it being a departure from HSG.  I don't mind the leveling mechanics since I plan to play the heck out of it and everything will come in time.

My biggest disappointment is with the local multiplayer, only one local user can play and level up their character, based on who's account you're logged into.   Everyone else has to play with a stand in.  So you have to play alone or online to level your character.  Very counter productive for a couch co-op game.  I know not everyone plays locally but we do so that diminishes the overall value for my house.

Did the PS4 Pro console only from last month come with a 20% off PSN code?  My nephew got one last month and wants to buy a game on PSN.  He left box at his grand mothers house.  Before he drives her crazy looking for a code I wanted see if there even is one to be found.

I could have sworn more recent Pros didn’t have a code from the way people were talking. Sony was issuing them a $10 code soon after purchase via message on the console itself.

I’d still look in the box just in case though.

My PS4 Pro Destiny 2 bundle DID come with a multi-fold pamphlet that had a 20% off code on the next to the last page (inside fold).  I got it Black Friday week.

We're supposed to get something with the PS4 Pro?  I just bought one and added my account to it, but I haven't seen anything in email or through the console.  I never receive promotional emails from Sony even though I've signed up for them a half-dozen times.

I got the email code, but I've been getting those.  I don't think the Pro itself has that 20% off code anymore (besides it expires in February anyways as I understand), I looked through and could not find one in the PS4 Pro I just got last week.  I'm surprised they don't put in a new code though, that seems to be a really cheap bonus to toss in that gets people to spend more money directly with Sony - especially since they seem to just give them away anyways.

I just bought a PS4 Pro and it came with a multipage booklet that contained the 20% off code  at the bottom of  one of the last pages.

But despite having had this PSN ID for years and being a Plus member since inception, I have never received the promotional emails folks are talking about, setting has always been enabled in my Notification settings.  Bummer

I finally got a G&W amiibo...but now realize I want all 4 poses displayed.

if you have a 3-D printer you can make these.  When the amiibo first released, you could buy these  from folks on Etsy  for $10

Basically what he said but one thing to note is that these are physical tickets that are mailed in with your game.

They are small, the size of a movie theater ticket stub so its easy to miss if you pull a game out of a bubble mailer.