CritcalJ hasn't added any friends yet.

That changes the whole thing

The Winter Sale has started.

Prison Architect is free for a limited time.

Its cheaper than the $12 they want on steam for the 2 expansions. Tis funny, usually I end up with the full versions on Steam and the base versions on GoG. Flash deal is up for another 30 hours or so as of this post.

Flash deals on GoG and a few others this year. Looks to reset every day or so.

I should have waited.

Whelp - I managed to score a PS5 from BestBuy.  Now, the question is how to break it to my wife who's still asleep...

Wrap it up and give it to her for Xmas.

A game called teleglitch is free for the next 48 hours.

Since Microsoft bought Bethesda, I'm not expecting these games to get any cheaper.

Though I own it, I haven't played Witcher 3 yet, so I can't speak for that game in particular, but I have to admit that I'm not a fan of when games try to shove some kind of message down your throat, whether it's requiring you to make a moral choice or anything else.

Like, I just played through Mad Max a couple weeks ago and there are literally hundreds of collectables that you need to pick up if you want to plat the game.  One of them are "History Relics" (photographs of a time before the apocalypse.)  After damn near every single one of them, Max makes some kind of cynical comment about how much better the world was back then.  Like picking up a postcard of a couple on the beach and he'll be all, "There was a time when water was plentiful; who'd have known what we'd do to it."  After the first couple times, you think, "Yeah, sucks about what happened."  After a dozen times, it's turned into, "Yeah, Max, we get it, the environment is important, give it a rest."  After 103 times, you just want to yell, "Shut up, Max! You deserve the crapsack world you're stuck in!"

But yeah, I don't want some kind of moral choice to constantly be thrown at me, like they're trying to constantly make me feel bad about making poor choices.  I like the classic style of storytelling that prevailed up until the 90s before everything had to have gray-and-gray morality.  I don't want to know the sad tale of why Ganon or Kefka or any other villain wants to destroy their world, I don't want to feel sympathy for them and I definitely don't want to redeem them.  I guess I just like my heroes to be good and my villains to be evil.

I had Witcher 3 in the backlog for a while.  Started playing it a 2 months back and I am on the final few missions in the last DLC.  It's a good game that takes forever to play.  There is so much content, some of which requires you to make moral choices.  Not so much that it detracts from the overall game in my opinion.

To each his or her own.

2.  Save before you do the abandoned inn.

Wish 2K would do NHL and NFL games again


EA has the NFL license locked up through 2026.

I’ve never seen any of these in a dollar tree. There are several I stop at when I am around them. I am guessing inventory is highly regional.

After weeks of periodically looking, I finally saw 1 game at a dollar tree.

Check your e-mail for promo codes on the Homeworld series. Mine shows this: 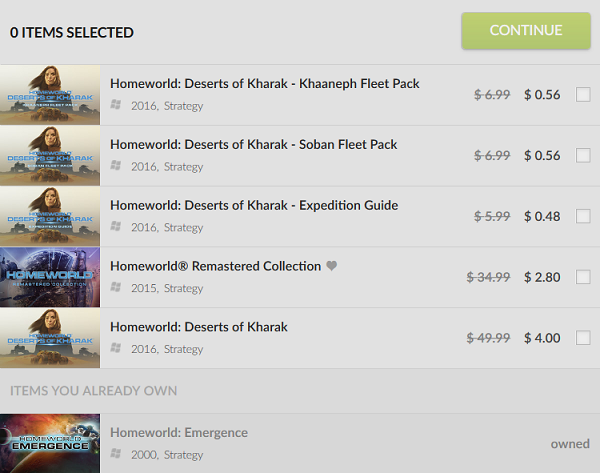 Thanks. I had the code. Paid around 9 for the whole deal. It said that I save around 110 bucks.

Selection, quantity and delivery frequencies will vary by store.

How much actually gets put out by the stock team is another factor. If the store doesn't have a lot of staff, they could easily get backed up on freight. Often times, a fair amount of product will be sitting in the backroom. So If you're looking for a specific item and don't see it on the sales floor, don't be afraid to ask an employee to check in the back or pull up inventory.


This is an issue everywhere. Businesses don't want to hire adequate staff. They want to run bare minimum. Walmart is the worst.

So jealous of you people who have Walmarts that actually clearance stuff.