vikasbpai hasn't added any friends yet.

For those who are looking for people who received their shipped notification:

4. Checked Fedex tracking# on 06-Jan at 12:45am EST and it shows just shipment info received. Don't see the item yet received by Fedex.

I should've placed an order for pick up. Went to the closest Walmart that had them in stock and their entire WD external shelf was empty for some reason, they had other brands though. I didn't have the time to ask an employee what happened to them. I checked the website again and all the stores that had them in stock are now out of stock.

If Brickseek/Online says there are any in stock, it doesn't mean they need to be available in store.

I have experienced multiple times online stock says available and there is NADA at store.

I had placed my order yesterday afternoon with pickup supposed to happen today 8am EST. Its almost 5pm now and no message/status update.

Don't skip out on Until Dawn: Rush of Blood. It's a great experience, and has more replay value than Batman for a 20 dollar game. My favorite VR game so far. Eve Valkyrie is also good. Not 60 dollars good, but getting it on sale it's worth it.

Alot of people didn't like Driveclub because of the motion sickness and the graphics. At the speed you are moving, it's difficult for the system to populate detail in the graphics quickly enough, so it seems that it's too blurry, which probably also contributes to the motion sickness. I haven't played it personally, but that's what I'm told.

Trackmania Turbo has a VR mode. Supposedly a post release patch to the game allows you to use VR for several of the tracks. It's more of an arcade racer type game and less of a sim like Driveclub, so it's personally more up my alley. I haven't gotten it yet but I've been on the hunt for a cheap used copy at Gamestop.

Dude, you were so right on Until Dawn!! I got my PSVR yesterday and must say the Until Dawn (demo itself) was awesome. Made a couple of my friends play it and they were literally screaming/jumping out of their chairs

Want to take advantage of the last day for the B2G1 offer, but not sure what games to buy for PSVR.

Non PSVR games: I got Dead Rising 4 as pre-order with VCO discount (don't intend to buy The last Guardian or Watch Dogs 2 for now).

Thinking of Eve Valkyrie, VR Worlds and maybe Robinson for a combo (Eagle Flight not available for shipping/near me). What would you recommend?

Staples is offering 20% off when you buy $50 in select gift cards. The ad shows Toys R Us, Xbox and Petco GCs. More GCs might be eligible (need to check when deal goes live).

after Staples® easy rebate' when you buy $300 in American Express® Gift Cards. Adding this in case it is possible to double dip on the discounts. 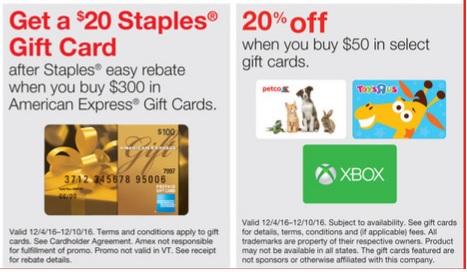 PS: One of CAG user confirmed this works in-store but is applicable to GCs only for $50/multiple of $50s. Credits: Steve Box

Can anyone confirm if they were able to use this offer along with Best Buy credit card?

Problem is the Best Buy card doesn't have an expiration date which doesn't allow to complete the process.

Asking this to see if we can stack the 5% standard cashback with the BB CC.

I personally think the 10% or wish list should stack with the $50 off and 5% red card.
We would be lucky if the 10% tech coupon and 10% wishlist coupons stack!

From what I was told it was limited to the launch only and they won't continue producing that bundle anymore.

That being said, with Black Friday coming up you could theoretically piece together the items you need for just as cheap or cheaper than the launch bundle, it will just take a bit more legwork.

For example, the camera by itself will be on sale at BB for black Friday, and you can probably find the move controllers pretty cheap on ebay or somewhere (I found a pair in a pawn shop for $15) and then you could either grab VR Worlds with GCU if you have it, or find a used copy at Gamestop, I think they are doing a B2G1 for Black Friday.

Thanks! The camera is on sale for $39.99 at Amazon and Target too. Only worry about used Move Controllers was the older they are, the lesser they hold battery charge. Might try to buy the parts separately at Target this Sunday if their promo codes stack. Else will buy from Best Buy using the mail offer I received where I can buy the Core headset, Move controller 2-pack and Camera for $60 less than MSRP.

PS: Received this mail when I added "Notify when available" alert for the launch bundle on bestbuy.com

Since quite a number of people were saying that the highest cost game is sometimes coming as free, went ahead and tried some combinations with the following possibilities:

- The third game that is rang comes as free provided the price of the 3rd game is same or lesser than the MSRP of rest two games.

- Since some mentioned the third game combination like last time was not working, tried another combination

In both cases, the cheapest game (After PM i.e. Titanfall) came as free irrespective of the order. FYI, the counter guy did not have to manually add anything for B2G1 as free and this got combined with PM.

I initially mentioned by mistake to the guy that I wanted to do PM and B2G1 which he was not ready to accept, but when the system allowed PM and then B2G1 automatically, he was okay.

So people wanting to go for B2G1, just go ahead with scanning the 3 games and only commenting if the B2G1 does not automatically come up.

Okay sorry for the redundancy of this question but how exactly do you make sure they give you the GCU 10% extra trade in bonus? Like what page is it supposed to be on that they put in your RZ account in?

As mentioned above once they scan the game, provide them your phone number, member id/card and ask them to confirm that they pull up your record which says you are a GCU member by clicking a button at lower right bottom of the page. There might be multiple records but they have to add the GCU one to the transaction so the 10% extra shows up.
Mention them not to process transaction unless the 10% gets added to the total.

If they get to the part where they are asking you to sign the doc without 10% in, refuse to sign mentioning the GCU whatever excuse they provide. Request them to cancel current transaction and redo with steps above till they are able to add the extra bonus :P

Can someone confirm the trade in value for battlefield 4 on X360?
On the best buy site, it says $40.
Whereas on the mobile app, it says $30