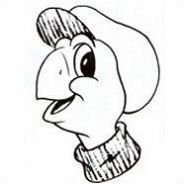 I'm about to get back into physical magic cards for the first time in 25 years with a buddy of mine.  Have you guys seen the new D&D Forgotten Realms card set coming out on Friday?? Ho-lee shit.  This tickles me in all the right places.  Should be a fun time to start fresh on a new block.

Have fun figuring out what to do with your 7,000 cards in 18 months when you stop playing again!

I knew of the expansion from the other side; after umpteen years of 5e D&D getting M:tG inspired source books, they finally went the other direction and injected D&D into M:tG.  But I got out of the card game (for a second time) some years ago so it was mainly looking at the card art online and saying "Neat!" for me.

I can believe it. This is what I warned people of, back when Steam launched.

"Some day someone might revoke your shitty six year old game you never installed and wouldn't know was gone except for the pop-up"?

I mean, it's a dick move from the publisher and people should feel free to bitch about it.  Using it as a warning against Steam in general is a bit overwrought.

I did that once and got locked out of it after about a month, good way to waste money and support scammers I guess.

Gotta be smart about where you buy it.  I've bought a number of keys around the $7-$10 mark and they worked fine.  The $3 keys on eBay or AliExpress, etc I assume are just sketchy cracks.  That said, you can buy a lot of $3 keys for what it'd cost to buy a retail copy of any MS product and almost certainly find a working one well before you hit even.

I don’t need special chairs just to get comfortable while playing games since I’m not a geriatric yet.

Bought a Secretlab Titan in the black-on-black cloth variant as a Father's Day gift.  Very nice and solid and far better than the shitty IKEA office chair I was using (which was also shedding bonded leather bits and the arms had both broken because the chair was designed in a way where the plastic arms absorbed all the stress from reclining)

card shaming, huh? i thought we were more civilized than that

That's something a GT 630 user would say.

(Luckily, I'm not on an 8 year old card but with the way supply and demand are going I might be. 970x here.)

As I understand it, the Maxwell cards were on the chopping block but Nvidia determined that too many people were still using them with everything going on to cut off driver support.

Nvidia is ending support for 600 & 700 series cards but if you were still gaming on a GT 630, you have larger issues than driver support.

I'm a total whore for the Soviet Bleak aesthetic but I'm keeping my optimism for this in check.  I don't need this to be my Cyberpunk of hype disappointment.

Knowing it'll be on Game Pass is great though.  Everything is better when you're not directly paying for it out of pocket.

Control as the latest Epic Store freebie has gotta be one of their best yet.

This is the base game only.  Which doesn't make it a bad game (esp for free) but figured it was worth mentioning after the Humble Bundle debacle.

Some other people and I got emails offering another Six-for-Six deal after canceling a week ago.  If you also canceled and previously had the plan, might be worth checking your emails.

Reactivated: $6 for Choice for 6 months

An exclusive offer just for you! Come back to Humble Choice and we'll reactivate your $6/month plan for the next 6 months.

Every month you'll get a set of brand new, handpicked games to add to your collection and keep forever.

As a wise woman once told me 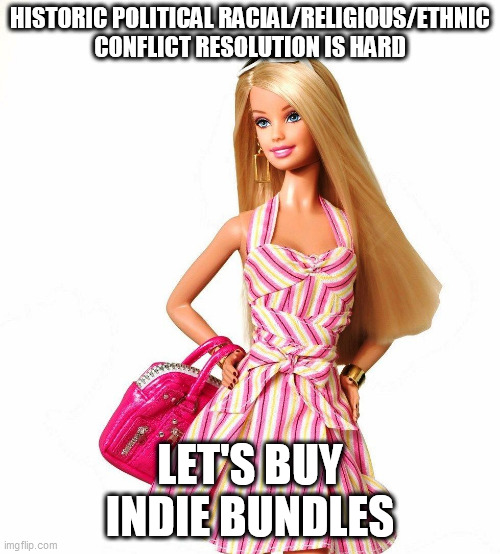 I'm not up for "strongly arguing" anything political in a deals thread so... don't buy it, then.

In other news, if someone does get the bundle, you may find this script helpful.  It auto-adds the bundle to your game library since otherwise it won't add until you manually download each game.

I bought the Racial Justice bundle and have been playing through the games.  I'm up to around 200 played (slowed down a bit now though) and would say that perhaps 1:10 is a keeper.  Which, for five bucks, is still a lot of half-decent games if you can find them.  I saw a number of games I recognized in this bundle as well so I know there's at least some quality in there.  In my opinion/experience, anyway.

This isn't counting all the music/asset bundles and TTRPG one-page homebrews and other non-video game stuff that's in there.

The money itself goes towards the United Nations Relief and Works Agency versus getting mailed to Hamas or some other nonsense.  It's humanitarian aid to help alleviate the civilian cost of war regardless of political considerations.

Finished Manhunter and I'll give it a C+.  Good foundation but the follow through isn't really there.  I mainly finished because I was legitimately curious to see the story end (I liked the cut scenes) and because it was so easy and rote that I just played it for something mindless.

Saw a new game on Game Pass called Solasta which I keep wanting to call "Solastra" because that would be a better name.  I knew nothing about it but it looked like a Euro-jank RPG and promised an authentic experience and, in retrospect, that's what got me to Kickstart Legends of Dawn so many years ago and look where that got me.  I fired it up and immediately noticed that it felt just like D&D 5e rules with the serial numbers filed off.  It had the same classes (though some cut out), same racial bonuses, same skills, etc.  Turns out that this was unfair of me because the developers got an SRD license from Wizards of the Coast so it's actually a 5e ruleset with the serial numbers intact.  This dedication follows through to including skills useless in the game with a tag saying "Hey, you can take this but you're not going to use it" which is kind of funny but also a little annoying when the class/race you picked gets those skills as a locked default instead of something useful.  I suppose their dream is that people will use their dungeon editor to make other adventures that use those skills?  Maybe?

Anyway, the game itself is... okay.  I guess.  It's Euro-janky indeed with bad voice acting and outdated character models and my dwarf's beard was sliding off his face.  The story is basic fantasy RPG fare.  But the characters themselves are okay and the game does some interesting stuff with the maps, with spiders scaling the walls and flying critters really using the Z-axis well and more intelligent AI than you'd expect.  And watching the d20 roll and your bonuses added gives it an XCOM lesson feeling that "I just need to roll over a 3 to get this... motherfu---".  But the main thing it has going for it over other isometric turn-based RPGs is the D&D 5e ruleset which it does better than the actual D&D branded Baldur's Gate 3. It's the closest you'll get to playing D&D 5e without begging to join a Roll20 group on Reddit and, what it lacks in human interaction, it makes up for in dodging the inevitable online game where some dude wants everyone to use his homebrew race of sexy mole-girls.  If you've always wanted to play 5e or you have/do play and like the idea then try it.  Otherwise you might be better off with the bigger names in isometric CRPGs.

Did Smile For Me get removed from the Itch bundle? Bought it mainly for that, went to download it and it doesn't appear in the bundle anymore ...

Looks as though the issue is that it's only available as a Steam key (there is no direct download from itch.io for it) and Steam keys aren't compatible with the bundle unlock.


Spoiler
Hi, we've removed a few comments that were redundant.
HERE IS THE INFORMATION YOU NEED TO GET THE GAME:

Due to a miscommunication, our Steam keys aren't compatible with the Palestine Aid bundle. We didn't know that would happen before we joined the bundle.

If you are one of the people who bought the bundle and tried to redeem our game, we are going to be enabling key redemption for you. It will take a little time to enable, but within 48 hours you should be able to redeem a steam key as a Thank You for purchasing the Palestine Aid bundle.

Again, thank you to everyone who politely emailed us letting us know about this bug. Sorry for the confusion and the inconvenience. In the meantime, we hope you'll enjoy the other amazing games in the Palestine Aid bundle, and you'll have Smile For Me soon enough.