AngelsPlight hasn't added any friends yet.

Finally received my "Used" copy of Zelda Link Between Worlds from Gohastings during the 40% off used sale. For god knows what reason they sent me a completely new copy that is still wrapped but I'll take it. 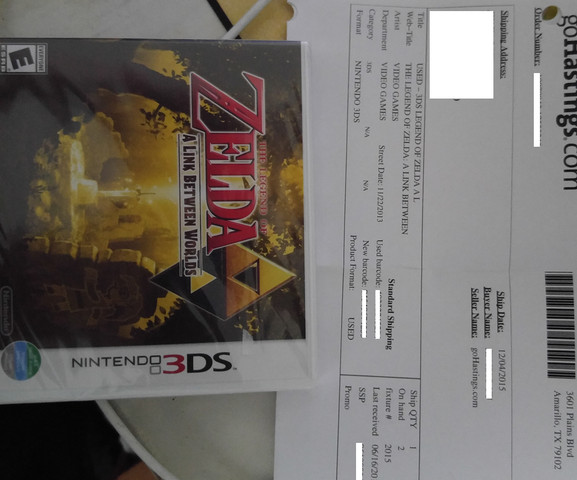 I honestly just found out this game existed today when I saw this game on sale. I guess I have another game to play on my long list to To do's" which barely ever moves since I keep adding new games as priorities.

Works with a previously registered email and previously claimed the reward.

It's an english reviewer. English reviews for any jrpg never go above 8. A 6 is like good. They give garbage games like Battlefield 3 a 9.25, calling those games innovations but its literally usually the exact same shooter, weapons and controls as the previous game but in a new map. Hell, every release of Call of Duty gets a 8 of higher automatically despite it having literally no difference from the previous game other than new maps. Have to look at japanese reviews when it comes to japanese games.

I found DG3 to be fun. The lag was atrocious tho but fun enough for me to push into getting plat on it. Prob would have been a fast plat too if I didn't get incredibly bored grinding money for the weapon upgrade trophy.

Edit: Just looked at the review and I can tell the person didn't even finish the game. The complaints don't even make much sense since your ranged attacks are like 100% accurate when targeting someone and attackers are almost always in front of you so you can easily see enemies attacking you (On rare instances you get ganked from back, you're obviously not suppose to see them coming and have to be mobile and look around).

I'm currently platinuming Conception and all I have left is the "events" with the ladies. I really with I had followed a guide cause the game is losing the appeal.

Well SAOs is easy. You pretty much only need to invite the girl to your party, find a conversation spot and keep pressing the R button to max out the enjoyment bar. It is however a long tedious process cause the bar fills up ridiculously slow at rank 4/5, needing to complete about 30-40 conversations which takes around an hour.

Note for those getting SAO. Romancing in this game is my god, the most tedious thing ever, having to spend 2~ hours on each character just pressing R to max affection rank. Have to do it to about 6 characters for trophies and it is kind of required unless you plan on the heroines being stuck with default armor for the game. An alternate way is to battle and praise them every time they do something right but that approach would take around maybe a day and a half per character.

Edit: You game over if your waifu dies in battle.

I just ordered a grade 6 from them yesterday, said it only had "some fine scratches" so I hope it's in the same condition as yours!

They might be. My brother ordered a grade 5 and a 6 during their 99.99 sale and both also came as if brand new. One ofem even had the original box and all manuals + 30 day free PS+ trial untouched.

The only thing that companies like Xseed listen to is your wallet.  Enough people brought the first Senran Kagura  (including myself )and showed there is demand for a physical Vita release.

I actually have a bit of respect for Xseed. They've been releasing free DLCs for Ragnarok Odyssey Ace on a weekly basis so far 0_0

Note: The free games you get from PS+ will no-longer be accessible one your PS+ expires until you renew it.

Well it may just be the Gamestop you work at but the ones I go to, those stickers, immediately after they put them I, I can't remove them. It WILL leave residue no matter careful I am will taking it out (I know the sticker is recently put on cause I bought a used copy of Strikeforce that was just sold to them earlier in the day as I was there before the sticker was put on). Sometimes I have luck taking out those crappy stickers using the heating trick but at the same time, I avoid using that trick cause I will damage the clear portion of the case of I don't do it properly/use too much heat.

Hell, I'm going to be mad if my pre-order of Atelier E&L isn't sealed even tho I plan on returning it if goHasting decides to cancel my order last minute (Happened to me once on I think...Newegg?)

Well, ^ happens with Gamestop too. I 3/5~ of the "New" Games I bought from Gamestop were actually opened so I kind of doubted it was new. It did have the "New" sticker on the case meaning they gave me the display copy of the game. That isn't very new tho....

Na, no one in 176 pages has ever ordered from them.

Soooo disappointed that I did not get in on the Hundred Knight $20 deal... couldn't not bite on this. Having never played an Atelier game before, should I play Atelier Ayesha: Alchemist of Dusk first? Or should I start with the Arland games? I recently saw a thread regarding this but can't seem to track it down now.

Start with Ayesha. Unlike the other ones, Ayesha is much more flexible in the time limit. Knowing what to know on my 2nd playthrough, I was left with roughly 2~ years of free time to do whatever I wanted after meeting all the requirements to get platinum (You can choose your endings too so you can get platinum on a single save file just reloading). The others are much more strict, Rorona being the strictest ones, Meruru 2nd then Totori somewhat laxed with 1 years free time. A few of the characters from Ayesha also show up in Escha, but older.

Just about every product I clicked on was OOS, how disappointing :(

It's supposed to be available on the PSN Store eventually, like the DLC was for FFXIII-2.

It is. It will even come free if you have a save data of the FFX-HD. People just can't wait.