Hamble sent me a coupon to get a month of Choice for $6. 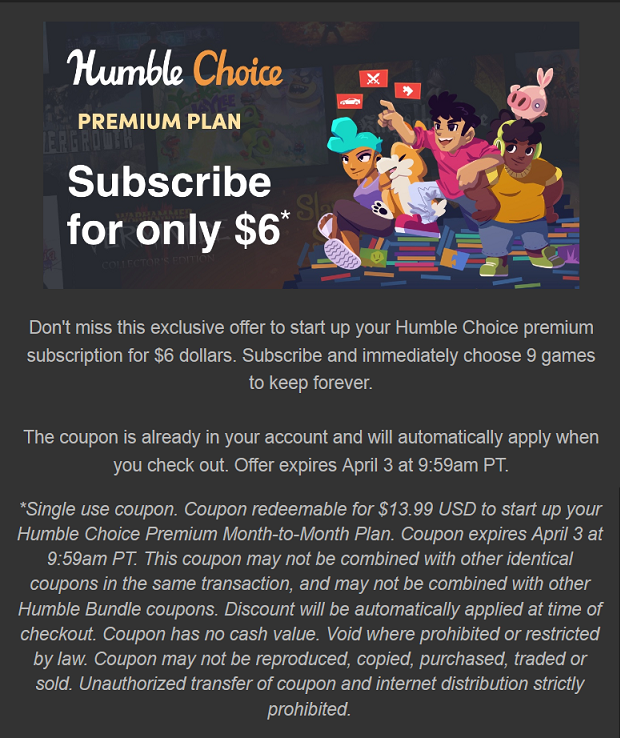 This coupon also works for gift purchases. So that way you can use it for any future bundle.

So I was looking into some of the games in the Postmodern Bundle to see if I wanted to get the $1 tier or not, and I noticed that the Yume Nikki in that tier is literally free on Steam.

What the hell, Humble?

I notice there is no discount.  I suppose one could show up later but I think that is a sign of things to come with the Epic store.  I bought the last couple of Bordlerands games from GMG at a substantial pre-order discount.

I've got this sneaking suspicion that Borderlands 3 is going to suck, mostly due to its business model.  Gearbox was the original pioneer of ("expansion packs" as) DLC.  This one is going to take it to a whole new level.

All of these other games do it better now.  But BL is a major brand name.  They practically invented the loot shooter genre.  Frankly they have their work cut out for them in order to catch up to the other major players in the genre.  I'm expecting delusions of grandeur.

If they patch microtansactions to borderlands 1, BL3 is surely going to have tons. They could for example lock raid bosses behind mtxn currency. (Bl 2 had farm-able Eridum to lock those) .

Maybe they'll just keep to consmetics like with BL2 tho.

Complaining about 50 cents of tax is cute

Exclusive not on Epic Games Store.

Glad Derp Rock Galactic got a free weekend.  I avoid Early Access like the plague.  Fun enough game that I'd be happy to get in a Humble Monthly.

Y no join closed beta to get it free.

No UPS here, but planning to get one sometime for like past ten+ years. Living in area with reliable power delivery, so it's not high on priority.

Who shuts down their PC?

Ain't nobody got time for that.

I have shutdown my computer a few times, maybe once a year to dedust.

What program did you use to see those stats?

It makes far, far more sense to get a great GPU and add more memory later to your existing memory than to start with a bunch of memory and then upgrade your GPU, thus leaving you with an unused extra GPU.  You can add to your memory (and/or add an another drive), you can't add to your GPU.

Yeah, 100% this for pure gamers. Of course this means you have to choose 2x8GB then and you'll be limited to 32GB (or 48GB of go full weirdo for 2x16GB+2x8GB). Of course that's probably enough for almost everyone.

Even I'm going for just 32GB for my next upgrade (will still keep GTX 970 for time being tho, unless 2000 series get massive price cut). And I do lot of dev/db/vm stuff which all eats memory for living. But going for 2x16GB to keep ability to upgrade later on.

(If only there was 12GB sticks)

Games are going to be limited by next gen anyway, which probably have ~16GB range of shared memory.

Might as well go for the best, if you want to use it for next 6+ years.

Am I the only one that rocks a lot of drives? I have 6 internal, 3 external including one backing up my main SSD, and I believe 2 I dock now and then for backup purposes. 2 of those drives are old now though....like 3 TB or so. I think just my Steam drive and one of the drives (an old one) isn't backed up. I am majorly due for a motherboard/ram/processor upgrade though.

Sadly all internal hdds start to be pretty old, so those have to be replaced too.