SPS hasn't added any friends yet.

Today I went to the thrift store within walking distance of my house, and the one woman recognized me and that I am always looking for movies and video games and pulled out four boxes of movies that they hadn't put out yet. In there were six complete GameCube games:

Also found a copy of the Handmaid's Tale season 1 on DVD at another thrift store for $4.

So happy to finally be out thrifting again!

Went to a few. One was cleaned out as always. But the other two I checked had a lot of older games as has been posted. Picked up NHL 17 for XBONE and a copy of Shadow of War for PS4.

Found a copy of Radiata Stories today while thrifting.

Last weekend of the Gamestop closing near me. Loaded up on $1 games. For $30 I got a ton of games:

Wanted to preorder Doom Eternal and the Sword and Shield expansion pass so made quite a bit of trade credit off of this transaction by taking it to the other GS near me. Crossing my fingers that GS lasts until November so I can use the trade credit I have left to get what Nintendo's mysterious November release will be.

Not a thrift store find but I got all this at an estate sale today for $137. 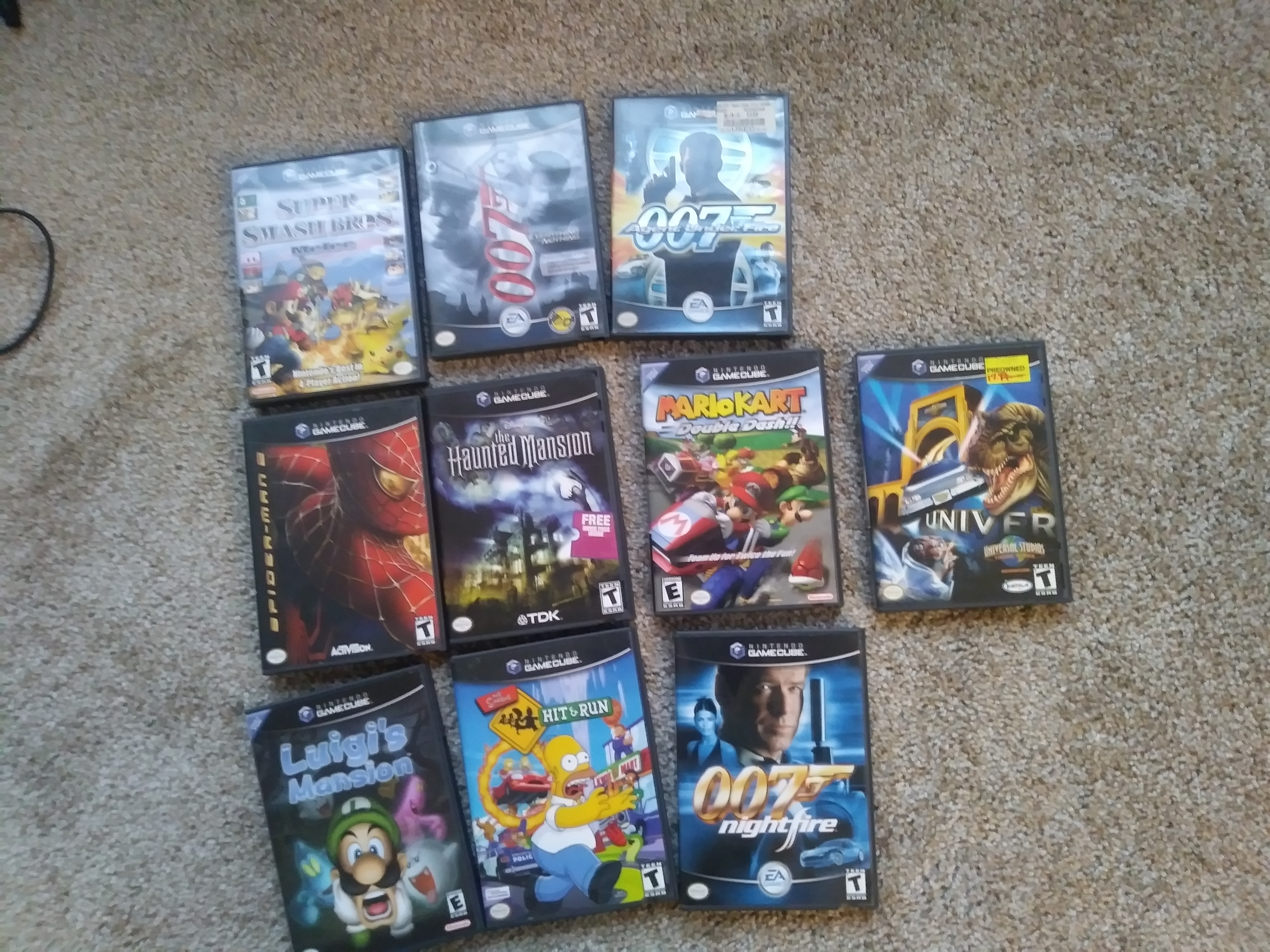 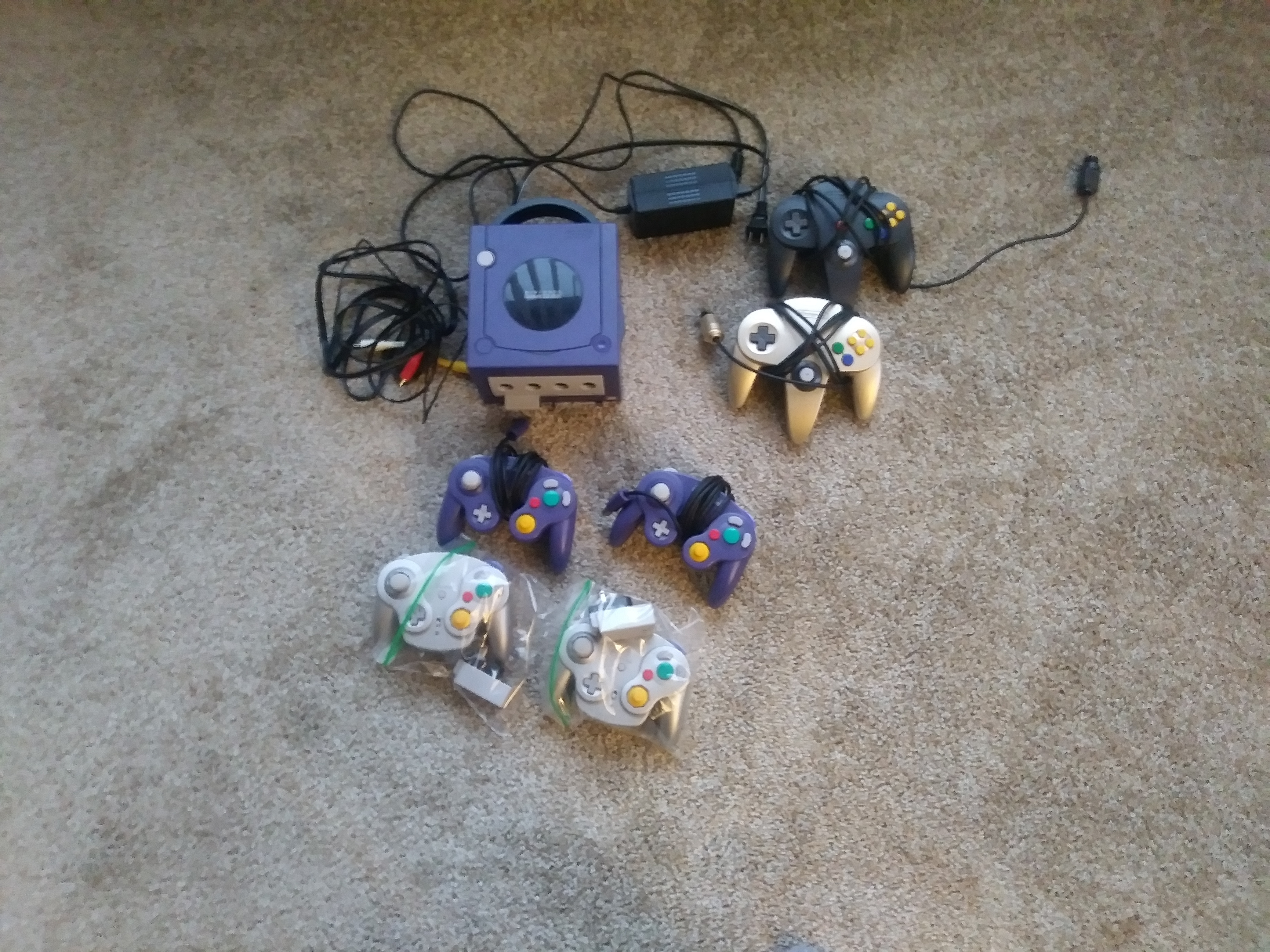 Moved fairly recently so I have been buying mostly household stuff at thrift stores and whatnot.

Went yard saleing the last couple of days and got 12 PS4 and 3DS games. Along with a couple of Vintage games I got for cheap that were worth as much as I would've gotten on ebay I ended up getting like $166 trade in credit.

Today was a surprisingly bad day for garage sales in my area despite it being the weekend of the annual Yard Sale Trail. That said I ended hitting one garage sale and got the following for $27

Mario and Sonic at the Winter Games (Wii)

Passed up on a Diddy Kong Amiibo and a Luigi Amiibo.

Went to Gamestop immediately and traded in all but the Amiibo and darn near tripled my money.

In all honesty aside from the early summer finds and one big PS1 game find that I didn't post here, I haven't found much. This was the best yard sale weekend I've had since my vacation. Anyhow as to what I found, the 3 PS1 games and 3 7800 games ended up being .75 total, the movies were all a buck apiece, and the DS and 3DS games (except for lost World, that was $2) were included in the bundle of the DS Lite and 3DS. Oh and Sneak King was $2, but it says its used but is sealed, it goes with my sealed Pocketbike Racer.

Edit: Also the Blu-rays were all a buck also.

Went to a local used book store and got all the following for a dollar apiece:

Found a bunch of decent stuff for this early in the year last weekend:

Morrowind: GotY for Xbox original (no map or manual and disc is in rough shape)- got it mainly for the shelf as I prefer to play it on PC

Lord of the Rings: the Third Age

Morrowind was $3 and the GC games were a buck apiece.

Today I had one of my best days garage saleing but also the worst. I think this would be better posted in the shopping morality thread but since its garage sale related. This makes me so angry and I apologize if I sound entitled but here we go.

I got up early to go to a garage sale at 8am that was advertising DS games. We get there 5 minutes early and I ask if they had the games they advertised. They are like sure let me go get them. Then in the 10 minutes we're waiting for those games another older guy comes and asks for video games. They bring out their big bin (think the most recent episode of Game Chasers for size and scope comparison), and we ask how much, and my brother and I hesitate (I was going to offer $5 apiece), the mother says "what a dollar or two?" and this older guy says $1.

So my brother and I are in the bin digging around and we both pick out a few games. The second we take our hands out of the bin the guy grabs the rest of the games out and hides them so he can look through them. I see a  DS Kingdom Hearts game and ask him if that had the game in it. He says "That's mine". We ask if he found Pokemon Sun and Moon carts in the boxes of mixed up games. No response. Then I ask if they have anymore Wii games, and the family pulls out some Wii and Gamecube games. I do what this guy did and grab all of them and keep a death grip on them. The guy gives me a death stare. I find a copy of Mario Kart 7 in another game's case. So turnabout being fair play I grab the Mario Kart 7 box and reunite  it with its game. I go home and while I gloat a little, I feel like garbage about this whole experience. I am probably going to go back to the garage sale later today and hand them another $20. That said I did make out pretty well today for $25 we got:

and a 3DS XL that had been stepped on but it turns on.

Found a ton of good stuff this weekend, some video game stuff, some non. A majority of this stuff was from one estate sale and a block sale near my house. We'll start with the game stuff:

Kinect for Xbox One $5

Billy Hatcher and the Giant Egg $5

Kinetica demo and two other demo discs for PS2 for $1

Lego Star Wars and Need for Speed Gamecube for $2.50 apiece

Super Nintendo cheat book 3  .22 (all the change I had in my pocket)

Requiem for a Dream $1

and finally a big bag of 54 vintage GI Joe figures plus 3 vintage Star Wars figures for $5. A lot of accessories also. Don't know anything about GI Joes or Star Wars figures. Highlights (the only ones I recognize) were Gung Ho, Duke, Destro, and Sgt. Slaughter. Also there was an original Lando Calarissian figure in there. I think there were a lot of mail-ins.

Yeah so quite the good day

Bad year of garage saleing so far this year. Mainly because I haven't been able to get out on Fridays like I did last year...but I did have a huge run of luck today and picked up the following:

Resident Evil Blu-ray 5 pack and Godzilla (2014) bundled with a Platinum Gamecube with two controllers, a memory card and a donkey kong bongo for $25.

I told him I was interested in his original XBox he had but he wanted $20 for it. I told him I would think about it because I didn't have the money on me. He told me that if I came back for it he would give it to me for $10. I came back with the money and got the following:

I almost bought a Wii he had for $15 and a PS2 for $15 also as I could've probably gotten both of them for $20 but I couldn't carry everything on my bike and I had about 7 miles left to go til I got home lol.

So yeah bad year so far but today made up for it.

All within the last week

Last Weekend: 2 Wiimotes with wiimotion plus built in, a Wii Classic controller and a Nunchuck, Resevoir Dogs on Blu-Ray- All for Like $5

Rare Tuesday Garage Sale (which honestly I wouldn't have gone to except for the fact that it was the next block over):

Then today I did some light Garage Saleing after work and got the following:

A DS Lite with Call of Duty: Modern Warfare 3 for $3 but no charger which worked aside from a loose hinge.

A camo XBox One controller with no battery cover for $1 which worked perfectly.