doctorwolf hasn't added any friends yet.

I understand what you're saying and I agree for the most part. The only thing that bothers me is that people are profiting off a community project that is meant to be distributed for free. It's like trying to sell burned movies/CDs/games for profit.


The part they are paying for is the usb stick (material) and the time and technical knowledge required to set it up (service). That's not provided by the community project.

Can someone who has coinopsx 4.5 installed on the Gamer Pro tell me what version number it shows on the left when you have it highlighted in the menu under AppStoreX before clicking to launch it?

We talking input lag or just like the interface is slow?

If there is noticeable input lag on this thing, then mine will be on the Facebook Marketplace next week. I get mine tomorrow but won't really be able to mess with it because of birthdays going on this weekend.

The interface especially (both the default one and COX) are really laggy. The games to me probably not as bad, but something does seem off (given it's also a wireless device, I went in expecting that, but might be more than I expected - it would actually be great to see what you and some others on here think since you might have better reference points).

There are some other general stability things I've run into that have also made me skeptical:

- Played Top Racer (which is actually SNES Top Gear) and everything was moving super fast and the emulation in general was some of the worst I've ever seen for any device. Given this is one of the included 150 games, I would have expected this to run WAY better.
- The way of entering coins (down + start) doesn't even seem to work half the time or do anything different than just pressing start. Pressing right + start to change the controls also definitely seems like great way for the kids to easily jack up the controls at some point.
- I lost video at one point somehow and literally had to unplug the core and replug to get it back
- In COX, the button to scroll down the list (B I think) literally stopped working on P1 (still worked on P2) making me think I accidentally remapped the UI controls - it eventually just mystically started working again so no clue what happened.
- The list navigation on COX is absolutely terrible if you have a lot of lists, as there doesn't seem to be a way to go backwards. You start on ALL and if you accidentally change to the next list and want to go back one, you literally have to cycle forward through every one just to get back to ALL, and it actually takes way more time than you'd think.
- To even get to COX, you gave to select it from the AppX tab (or whatever it's called) and then there is a long period of loading time for the COX app to even appear - which is weird, because I thought it was installed locally, but seems to be pulling from a server or something.
- The wifi range is terrible on this. I planned on using this in an area of the house that doesn't get the best reception, but still works decent enough with my TV, game consoles, and tv receiver. But this thing does not seem to work at all and I literally have to disconnect core and lug all this crap downstairs just to do anything web related, such as firmware updates, installing COX, etc. It's going to be great having to do this too after every 5th time playing COX.

Overall, it was just $120 for unit and stick which I see as fully retrievable and I'm not totally giving up on it yet and want to play around with it some more. I basically bought this as a replacement and improvement over the wonkiness of the "RPI Arcade" equivalent. I still think this has the edge over that, but value gap between the two (in terms of performance, simplicity, polish, and overall user experience) is WAY smaller than I hoped going in...

Which is hillarious because if I told this to myself a year ago I would say, "Well no shit buddy, this is made by AtGames, what did you expect?" Which makes me further think either a) AtGames has the most effective marketing team of all time or b) consumer quality requirements have all but vanished, to the point where they would rather defend crap than demand quality.

You need to create an arcade net account and log in to use coinopsx. Must do this every 5 uses. It’s free


What a bogus limitation. Especially if you planned on using this offline. Have to wonder why nobody seems to mention that. Kind of a major annoyance.

I'm just surprised the guy has an avatar of a cop, rather than a hillbilly in a red hat beating a cop to death with a fire extinguisher.


I guess we found out whose biography he nailed to a tee. I hope you're at least saving some gas money with the Camry.

Oh wait, TrumpCat already did that. (would've rather had a bigger stimulus check so I could upgrade my cabinet)


Triggered into entering a thread you've never once participated in due to the word "Trump" being in the title. TDS is clearly real.

I just noticed HSN has an exclusive Ms. Pac-Man, too, with the light-up area under the control panel. It also differs from the Best Buy "exclusive" by swapping out Galaxian for Pac-Mania.... and being $50 cheaper.

I don't think I really like that light up area under the control panel. I don't recall ever seeing something like that in an arcade. It seems like an odd thing to throw into the mix. Although, I guess they started going down the weird lighting path when they added some LED light strips with the Costco Super Pac-Man cab (I did not put them on). I don't get the point of that crotch light. Plus that poor old man is probably going to be bedridden for a week after tweaking his neck during that gaming session. I mean are original Pac-Man fans really 80 at this point? Arcade1up continues to seems like it's run by millenials who heard of arcade games for the first time while researching it for a senior project.

their sister in the back of a Honda and these peeps would still hang on their every release.


This is currently the most accurate post sitting on the entire internet right now.

Let's put it this way. The NES had about 700 games available throughout its entire lifecycle. The Switch probably had that many just over the last month that you can also get on your cellphone. RIP "Nintendo Seal of Quality."

I still don't see the fuss over that line being removed.. I understand why they did, don't blame them and it wasn't something intentional either.


I'm confused by this. What exactly was the need to remove this about? Too Italian sounding? I don't get it.

I see Arcade 1up has made the Golden Axe machine available for pre-order. Kind of wish it wasn't a site exclusive, but still tempted based on the games on the machine.


I'm actually kind of relieved it's an online exclusive. Otherwise, I would be holding off on getting it for probably months upon months waiting for price drops and spending every day feverishly checking brickseek. Paying full price for one of these sucks, but the extra money spent to not have to spend tons of time over the next year obsessing over price drop research is probably worth it.

Plus GA2 is remarkably one game that I have always wanted to play and hasn't been beaten to death by emulator options over the years. So I'm kind of stoked that this will actually be a totally new game for me.

yeah the only downsides to digital are if your switch gets stolen...


Yeah that and, if you're a collector or even would like to resell at some point when a better version of this game is released 10 more times on better systems, your digital copy will be worth absolutely nothing whatsoever.

Digital is convenient for sure, but a complete bust in the long run. Although companies releasing half finished games where patches are required right out of the gate isn't helping either.

So you're telling me to be a shitbag like a majority of you and buy 20 copies of this game to hopefully resell for $100 each during Christmas of next year? Like limited run video games are some sort of neckbeard stock portfolio?

No thanks. Good luck with your shady flipping, champs.

I've never been involved in this practice but am seriously almost considering doing this just to make you cry some more.

Pay attention to your own wallet Bernie and let people spend their money however they want.

You work in your skivvies? Are you a Chippendale?

That's pretty much been my work outfit since covid forced wfh. The mad dash to the dresser to get a shirt with sleeves on it because someone is requesting video chat is always fun.

Plus he was so excited, he needed some new undies.... Boxer briefs even!


I wonder how pissed his mom was when she gives him money for school clothes and he comes home with an arcade game. And after she throws it in the backyard, it grows into a giant beanstalk.

I did and it took me 10 minutes to find. How dare you doubt me. My word is my bond. 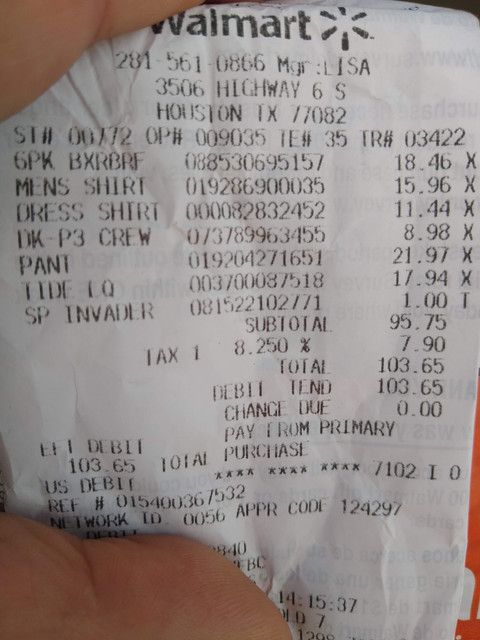 So excited to get a $1 arcade game, you had to buy 4 shirts and one pant leg to celebrate.