tangytangerine hasn't added any friends yet.

Posted by tangytangerine on Yesterday, 05:55 AM

If you've played the Persona games and like them, I'd say grab it.   Since Nintendo usually never price drops their 1st party games and this is the cheapest it's been.

Since it's the final tuesday of the month, they should be announcing what the GWG for next month are sometime this afternoon.   Which IIRC, we'll probably be getting Forza Horizon 3 as one of the offerings on Xbox One.   As the license for that should be expiring sometime in the next month or so, if previous Forza games have been any indication.

If anyone is wondering what the 360 games sale this week, they haven't posted any yet.   Major Nelson put the link up, but the 360 section just says "coming soon".

No joy here on the coupon (in PA) so we'll see.

On another note:  I do not like the wording on this Wii U DoTD email...I am in the market for a Wii U pro controller but it shows a picture of a 3rd party one and says "assortment".  Both of the stores near me have it in stock so I can just call and confirm...anybody have any experience with this in the past?

Ordered one back in April, the one listed for DoTD should be the Nintendo brand one.   As that's what I got when I ordered mine for that listing(was selling for $30 back then).  There's another listing for $19.99(not on sale) that's for the crappy 3rd party ones.   If you do decide to order and get a non-Nintendo controller, just return it.

Just be warned though, it mentions in the description that it doesn't come with a charging cable.   Although mine did have one with it.  So it's probably a wild guess if you're get a cable with it.

Pretty sure now that if any game has that "Renewed" mention in the title with AWD, you're going to get a disc only game.  Despite the fact that it has "new" listed as the condition.  As this is the 3rd & 4th game I've ordered from AWD under that "renewed" title and only 1 of the 4 games came with a case & manual.   So maybe the renewed games that show up in this section are discovered to be missing something?

My 2x xbox1 and 1x ps4 are regular versions.  The GOTY are extras on disk or codes?

Much like Square-Enix has been doing with their GOTY/Ultimate Editions, it comes with a voucher code to redeem for the GOTY content.  Although it's only the US version that does this, as PAL and Asian versions are 2 disc set w/ one disc containing all the DLC content.

These are supposed to protect discs that have cracks in the center. It may still be fine to play.

Yep, that's what they're on the disc for.   Which for 360 and Wii discs(DVD), leave them on as they're prone to cracking over time with heavy use around the center hole.

I did some rearranging my preorders yesterday and told the associate I planned to use it when I pick up spongebob. She said it would work and she has been there a while so I don't expect an issue. Got a $5 xb card with last month's a few weeks ago with no issues.

Just got back and apparently some people are having trouble redeeming the $5 monthly certificate right now.   Seems to be a software bug preventing it from being redeemed.  But the DM told the stores in my area to manually adjust for it.   But was able to get Bloodborne for $3.99 after the adjustment.

Thanks, been trying to order Bloodborne from their site(since it's $8.99 used right now) and use it on that.  But had no luck with it.  Guess I'll just go in store and use it there.

I cant check the Xbox games to see if they work since I dont have a system yet, but do they accept retro returns in store? Or do you have to mail it back to them?

It might be YMMV, but check with your local store(if they're open).  Called mine after getting a busted Dual Shock 3 few weeks ago that the analog sticks would drift even after cleaning it.  They said to bring it in and they could refund & do a web in-store order replacement.   Which since it's curbside pickup only right now, I had to wait outside while they processed it.   But got the order refunded and a new controller sent out that works fine.

What area are you in?

The Dayton Ohio area, although the one I went to was in Beavercreek, OH.

Keep an eye out, as they're clearancing out a bunch of older games.  Most of them were marked down to $13.50.

From what I saw, these were the ones I remember seeing marked down(they were $13.50 unless noted)

But it looked like most, if not all, of their 3DS games were being clearanced out.

Gamestop is definitely cleaning house with all these pre-owned sales. Just look at some of the TIVs of the games that are on sale, $0.01. When they fully open, watch them say no more trade ins of PS3 and XB360 games. Just like when the PS4 came out and they refused PS2 games.

Reading their reddit, some are taking trade-ins right now.  But like you mentioned, it's limited to current gen stuff with systems not being tested(just checked for cosmetic damage) and sent to the warehouse.  Any 360/PS3/Wii U/Wii stuff is being turned away.  It's also credit only(no cash).

I think that's the first time in a couple years they've had Rocket Knight on sale again.

Does GS even check and clean their preowned controllers?  Ordered a blue Dual Shock 3, as I need a replacement for my PS3.   Got it yesterday and hooked it up to sync to the console.   Then it proceeds to act like it has a mind of it's own, moving through the main menu and pressing X randomly(it turned off the console twice doing this).  So don't know how that passed a QA check at a store or warehouse.

After a google search, it's apparently something to do with the gunk that "sweats" from the rubber of the analog sticks.  Taking it apart, used a q-tip w/ rubbing alcohol and cleaned off the analog sticks and the rubber pads for the buttons(as the gunk covered most of that pad).  After spending 15 minutes making sure everything was put back right, tested it and apparently fixed it(fingers crossed it stays that way).  Still can't believe GS sends out stuff that obviously isn't tested.

Have no clue why.  Although I went back and rechecked the order.  Apparently 2 of them are "renewed", so more curious to see how they are.

Here's what some of them look like on my order page(in the spoiler), so it might be a short glitch or something.  But they seem to be in the middle of shipping.  I'll update my post when they arrive Wednesday. 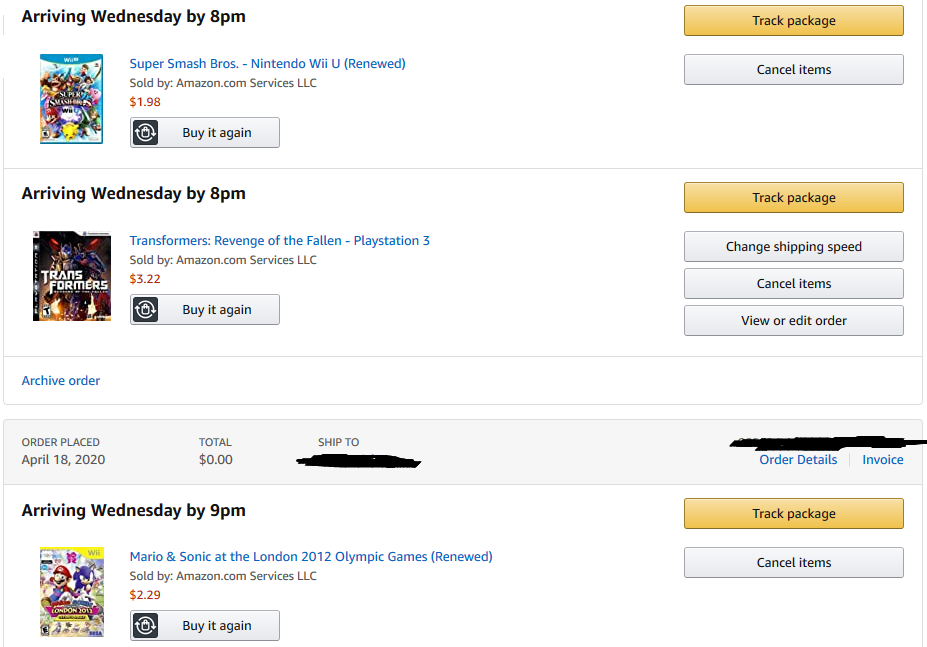 *Edit- SSB Wii U, Pokemon Sapphire and Mario & Sonic 2012 Olympic games all arrived a day earlier.  However, most of what I got is completely different from the description.

SSB on Wii U was accurate(case & manual w/ disc in very good condition).  Pokemon Sapphire was cart only in a small padded envelope and is likely a bootleg cart(colors on label look like they're bleeding over each other).  Mario & Sonic was disc only in one of those slim black DVD cases they use for disc only Warehouse Deals games(so no case & manual when it was labeled new).  Not only was it disc only, but the disc has sticker residue from a rental sticker around the inner ring of the disc(like Redbox games) and appears to be resurfaced.

Probably not sending back the mislabeled stuff, as it's not worth the trouble(under $5 in refunds).  Might contact CS about the bootleg Pokemon game.  But definitely not going to attempt anymore "renewed" game purchases from Amazon, as that seems to be a flat out lie.

*Edit 2-  Transformers arrived today.  Instead of a used Revenge of the Fallen, I got a sealed Dark of the Moon game with the RotF sticker.   Gonna keep it, as I have never fully played it(have a 360 copy, but this is in better shape).