I can't imagine you have much of a backlog of recent games if you only purchase games that are complete, unless you are mostly into old school games.

I absolutely do...how are you on this site and don't? This site is literally what afforded me that backlog. I have at least 20 something PS4 games on my shelf I haven't played, 10-15 Wii U games, around 10 3DS games, and right now 5 or 6 switch games. This is only counting modern consoles.

It has become such an industry standard now that just about every physical game I purchase has a day or week 1 patch that has to be downloaded. Even obscure titles seem to have one right out the gate.


The fact that you use to receive complete, fully bug tested games but the industry standard has become "push this broken game out cuz we have to get the game out by this date/for the holiday season" is honestly incredibly sad. That's why this is such a debate. Studios have gotten lazy, because consumers allow them to be lazy. They buy incomplete games for the same price as completed ones. Why bother testing your game when you can get mindless fans to do it for you? [Insert fallout 76 facts here]. Why bother releasing complete physical games for more money when mindless fans will buy it anyway? [Insert several capcom releases and spyro here].
Just because it's an industry standard, doesn't excuse the fact you're buying an inferior/overpriced product.

To me that is not a reason to avoid purchasing a physical copy, but I understand you may be looking for something different. I am probably biased to wanting the game sooner as I have the CE pre-ordered and the contents look nice...would prefer to have them sooner than later, but I expect delays with LRG either way.

To be fair, I would have preferred that the game is complete as well, but LRG should have held off on selling the game when they did. They should have pushed the sale back several months when the DLC and patches were actually finished and rated by ESRB. It is not good practice to sell a product to thousands of people without any idea of when you may actually ship it, which is why I prefer they just stick to shipping out what they told people they were selling. LRG already has a lot of the stuff currently in manufacturing to some degree, so putting the brakes on the process to include the DLC probably wouldn't be very feasible at this point. A slight disappointment, but this is a video game overall...inclusion of a few extra levels on the physical media ranks at the lowest levels of concerns that I deal with on a daily basis. That is from someone is a collector at heart. Once you start to get older, you start to realize how little these types of things really matter.


Here's where we agree. I absolutely don't think all of this is grounds to skip Celeste, but I believe every game release that is incomplete should be viewed per game. In the case of Celeste, the intention didn't seem to be "skip the DLC" from the get go. In the case of spyro, that was absolutely intentional and awful. People buying that game are supporting a terrible practice.
And I absolutely agree that when LRG found out about the DLC they should have delayed the game's preorder window. They didn't though, so here we are...and yes, there are more important concerns in life. No ones debating that. We're all just expressing disappointment in something that could be fixed but isn't. So some people are voting with their wallets. Simple as that. I agree with that. Be the change you want to see in the world. Even if it's something insignificant like not buying a game lol. :P

P.S. I got confirmation my games from the January first blowout sale are shipping. Sweet.

Good point. Of course if there's a bug and a patch that needs released then it may be a while before the game is truly complete. It does sound like (from what I read about the DLC) that the dev is moving on to something new (likely a new game) once this dlc is done.

That was another thought I had as well. To me, it seems like this DLC has been in development for a bit, and as you said it also seems like the dev is moving on afterwards. I would think if a bug occurred, due to the nature of the PS4 certification requiring games to be essentially bug free before they get approval for physical copies, the devs would immediately work on a fix if necessary. Obviously this doesn't solve the time issue but as long as the devs worked on things promptly I'd be content.
Either way, I'm getting the game..just bummed that yet again the complaints of others ruin a good thing...miss when this was mainly a collector's company.

I'm not sure that the upcoming DLC for Celeste is the only DLC ever coming for the game.  So even if they did delay it... it's possible the game won't be a complete copy on cartridge anyway.   It just makes it easier for me to just go digital on stuff like this.


That thought crossed my mind, but also: the DLC is being referred to as "the farewell levels". That sounds pretty final to me.

LRG Josh has already seen the poll and commented that they don't intend to delay. They took too much flack for Pixel junk Monsters and without a definitive release date for the levels, they don't want to push it back. I agree with that logic and I voted not to delay. LRG already has enough slowdowns in their process. We don't need customers adding to those delays.


Unfortunate. Pixel Junk Monsters looked boring so I didn't order it. It's a shame that game is ruining the chance for Celeste to be complete...At least in my opinion.

I didn't even know about the glitch at the time, just got lucky and got them for 15 each lol

: P lucky indeed haha. I was actually trying to get the glitch at the time but I missed every one by literally a min....
Thanks for the info! Those actual prices sucked, as expected.

Spoiler
Will any of my games work with the mini?

Crap. I bought these other games for nothing, too.

EDIT: I take advantage of every opportunity to showcase the best of my collection. I have zero shame in doing this. Please "Like" this post and give me the validation I seek.

+1 like because of Ogre Battle, one of the few strategy based series I really loved that sadly did not continue to the modern era...
(Now gimme a link to your discord server plz lol)

Thanks for the heads up on wolf link guys! Got one.

Not that it's a great game, but kind of shocked Killer Instinct didn't show up being a first party title.

Toys R Us has most Amiibo B1G1 40% off this week. Though TRU generally inflates their prices if you scoop up the $100 GCs on eBay every now and then for $85-$90 and join the rewards program it can save a bit with certain sales like this. Anyone seen the BOTW ones there in the last week or so??


I did on Friday. Even saw Alm and Celca. I went looking for poochy.

No luck at another bestbuy or GameStop. Waiting for Amazon now.

The first best buy I went to had a line, and only 6 non-preorders available. Happy I at least got my favorite link.

And yeah, I know you've wanted to end the conversation several times but chrono: I hold the door open for 20 people at a time if I've nowhere to be, I let cars pass if I'm trying to get into a store and am not in a hurry, act as polite as possible, but I would not let someone in their car in front of me if I lined up first. As someone already pointed out, the line did not exist. They did not make the line, and even if they immediately get out, they should be second in the line that didn't exist until someone started it. Not doing so isn't rude, it isn't discourteous, it's just following line procedure.
Today, I walked into a GameStop where a guy was patiently waiting for an employee to find his preorder. It was taking a long time so he said to the man, "I have nowhere to be, so you can just take care of the next customer and I'll wait ok?". I thanked him and told him I just had a question, asked about the Amiibo, got my answer and thanked both the employee and the customer again. That was showing common courtesy, and that's something I would have done/offered to do as well. If he hadn't offered to do that though, it wouldn't have been rude. It just would have been normal line procedure.

When I saw the Mario ones I knew it was time to finally stop trying to get them all...no more fire emblem Amiibo for me

So when I swung by Best Buy to pick up my order, since they know me there I was talking with the employee who usually rings me up. She let me know they did in fact get 3 extra ME. Damn... :/

Also: while that Best Buy was out of posters, GameStop had plenty. I asked and the guy gave me two so I could display both sides if I wanted (didn't even ask me to buy anything). Told me they had way more than neccessary for pre-orders so he was just giving them away to whoever asked.

So if anyone still wants a poster, try asking at your gamestops.

Tell me if this looks weird or not. concept design. I'm thinking about turning my display case for amiibo into a display just for my Master Sword statue, and maybe add a few Zelda amiibo in there. I would print at Fedex some tree graphics and place them in the back. Maybe on the front side as well, to block the Nike logo. I'm thinking about adding a plug in puck light at the top, angled to add some neat lighting.

Looks real nice! Definitely cover the awkward Nike logo if you can tho.
But hey, if you're going that far why not go a little farther?
Get some fake grass and rocks and recreate this: 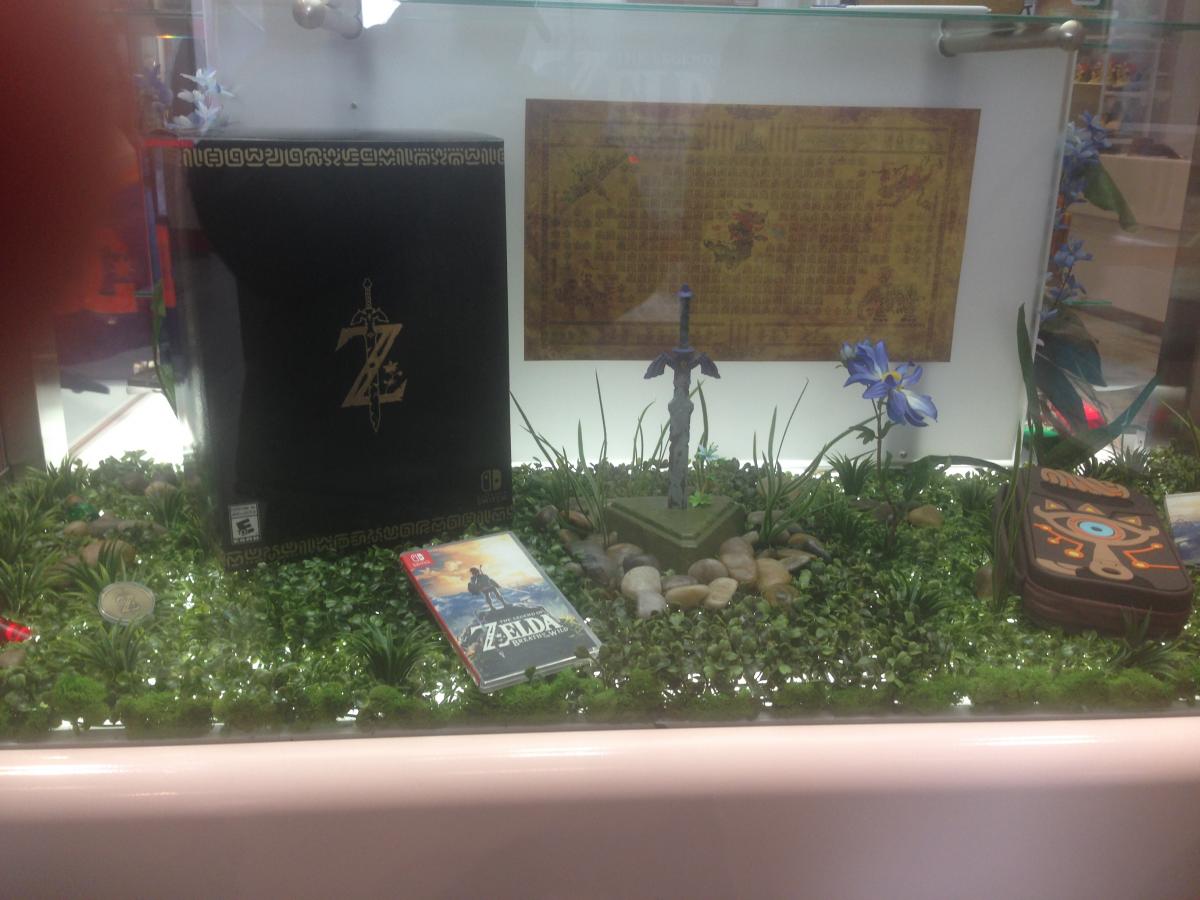 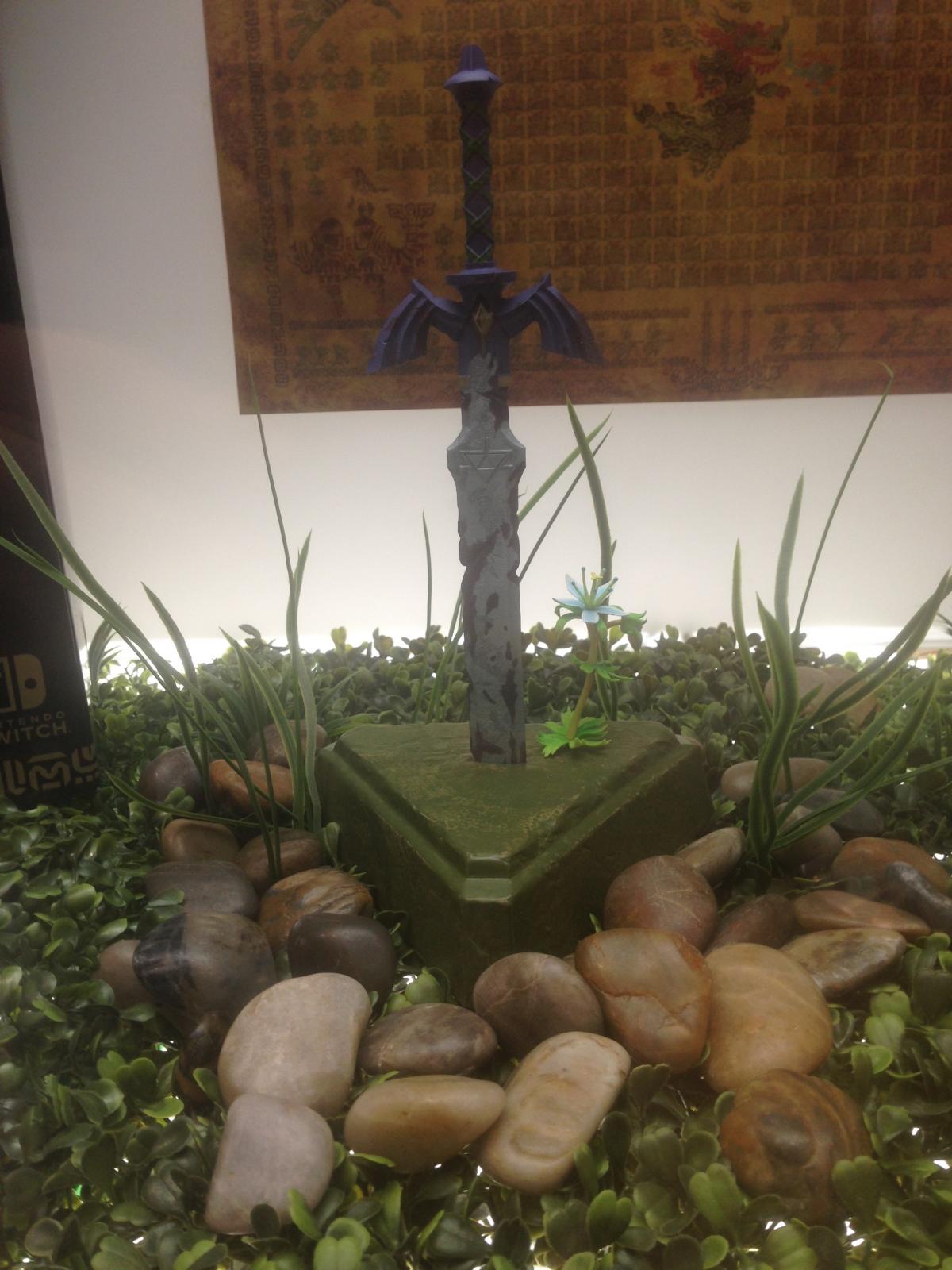 Thanks guys. I'll go at opening to both tomorrow and try my luck.

Wow...it looks a 100x more beautiful than the pre-order listings made it seem.