CouponKingofJax hasn't added any friends yet.

I've never been to a MS store, I assume you can only trade in xbox games correct? Lol

Received an email tonight about the new xbox model and noticed there was a link for the trade deal from before. They lowered the per game price from $10 to $5 dollars with a max of 5 games. It's going on this week from 6/15-6/22. 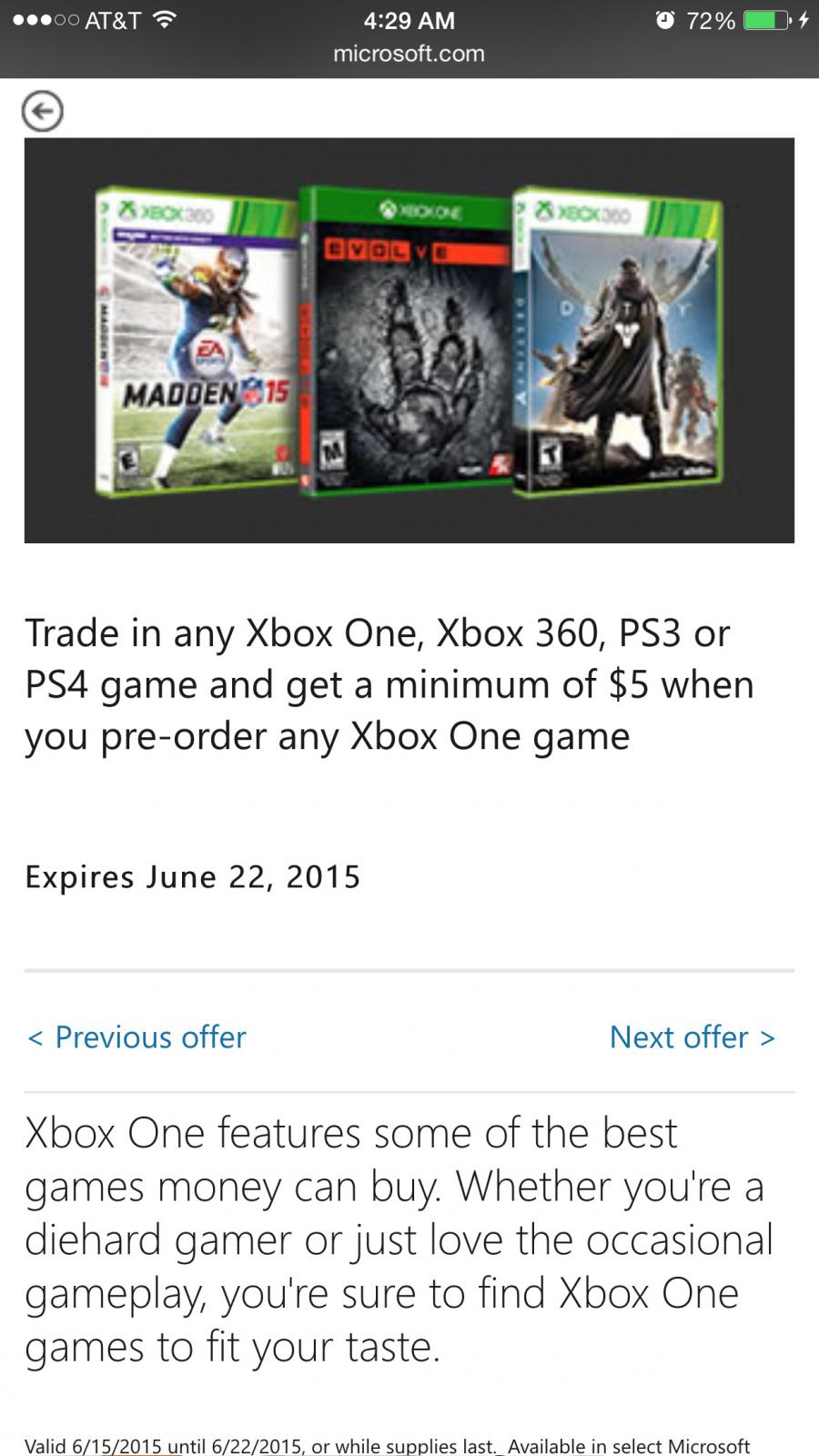 Thanks OP, figured I'll stop by the Sears I passed on the Way home from work. They had 2 of them. I bought both, one for a buddy of mine, he'll be thrilled with this gift. I was shocked they still had them

So glad it's working out for everyone.  Feels nice to be able to help others out when alot of you have given me great ideas for deals in the past.

I would only want the Golds, though, and I'd rather not be told "Yes, we have headsets and all of them are on sale" and drive to the store only to find that they don't specifically have the Golds.

So call and ask your store if they have the golds. I had to say electronics then store. If you say yes to product information it takes you to a call center if you choose the option that you were already dealing with someone it goes straight to the department. Lady I talked with was very nice about checking.

Call ahead, that's what I did. I'll post receipts and pictures when I get home.

Everything is crazy cheap at Sears this week. We got two ps4 gold headsets for $29.99. All turtle beach headsets are 70% off for xbox and ps. See prices below. Most prices can be found online except for the ps4 gold headset. They all say unavailable at store and can't ship. BUT, it pays to go check your store.  The three in my area had everything. Some stores have the tags out, some don't, but every single store is doing the sale. Just price check it or ring it up and it'll have the discount on there.

Way to check Inventory at store:  Call Local Sears,  say Electronics as soon as you hear the lady AI.  She will say are you looking for product information (which is to route you to a call center), or have you already spoken with a CS agent at the store, you say Store and it takes you immediately to that stores Electronics department.  I asked all 3 stores if they had Turtle beach headsets or PS4 Gold headsets, all were glad enough to let me know what was in stock.

Bonus:Should also mention if you have shop your way rewards you can get $5 off 50, or $10 back in points, or more depending on coupons in your account. New members can do a $10 back in points on $30 on your first purchase. Download the app on your phone and register before you go in and save yourself even more money.

You know whats funny is last week I tried multiple times to get them to price match the online prices of these games.  And now this week they have the same damn prices IN STORE.  And of course they had a MGS last week but I go tonight and it's sold out.  Just kind of stupid that they refused to match the prices and it ended up trickling down to the store anyways.  Has anyone seen this happen before with Kmart, I'm new to shopping with them.

Correct.  But the 20,000 ($20) in points you can use on anything else.  Or you could wait tomorrow and get a different game using the points. They usually show up by the next business day.  Or wait for a better deal. They have crazy deals all the time on stuff.  This Bluetooth Speaker I picked up earlier this week.  It's 49.99 but you get 40,000 points back just for buying it and then I got 10,000 more for buying something over $50 cause I added bubble gum.  So then I used those points to pay for my far cry today.  The speakers awesome and the far cry is great and i still have like 20-30k in points, lol.

Be careful, because that TIV is for the Day One Edition, and although when you type in Sunset it shows Day One Edition, when you click on the link it doesn't seem like its the day one edition.  The normal version is trading for 10 dollars cheaper.

I was just at my microsoft store and they had a plate of cookies out with $25 off $75 coupons attached to them. Apparently they just decided to put them out 2 days before they expire. My point is the cards can be used on anything xbox related, except the system. So you could possibly do 75 worth of xbox credits for 50 dollars, or anything else you'd like.  I'm coming back tomorrow. The reps there told me to grab as many as I wanted, so you may luck out and get cool cs reps like mine

Edit: Just wanted to update.  I went back to the store today and was able to get the xbox gift cards 75 for 50 dollars.  They didn't have the cookies out anymore, but I did ask the girl about the coupons and she said they were handed out at vip events in the past and they had leftovers.  So its probably very YMMV because some may have already passed them out.  I think if you live really close to one and have a few minutes its worth checking out or asking about.  There isn't even a code on the coupon, its literally a code they have to scan behind their desks, so you could bring up the deal and they'll probably know what you're talking about.  GL

Nothing like return fraud. This site is quickly becoming slickdeals.

BCPhotog, full on shame. Get out.

Really, come on meow.  All of you need to get off your moral high horse.  You wanna "shame" me for talking about return fraud but all of you basically stole from MS with this glitch.  You think just because a small glitch happened on their website that you are entitled to 100's possibly 1000's of dollars in free video games?!  Give me a break...  If you got games from this glitch, and you're calling me out for return fraud, you're a hypocrite. I'm talking about an even trade of an unopened game for a gift card, not getting games for free that should have cost 60 dollars, repeatedly. So which do you think is worse, return fraud, honestly?  Ha.  I was just trying to give some advice to people that might have a ton of Kinect Sports to get rid of, but next time I guess I'll just keep my mouth shut.

If best buy gives me 40 dollars for a return I got somewhere else for 20 I will happily take the 20 extra dollars in store credit if they allow me to return it.  I don't abuse it, but after Christmas best buy will take anything back without a receipt, because they know you'll just spend it in the store.  It's not like they're giving me 40 dollars back and reselling it for 20, they resell it for 40.  And its not even used, what do u think will sell faster?  A new copy or a used copy for 5 dollars less?  They get a sellable game/dvd and I get a gift card, no one gets screwed in that scenario.

So please, before you start complaining about me giving them a game or dvds and them giving me a gift card for the value THEY determine.  Think about the fact that some of you just got $100's of dollars in video games and MS got basically nothing in return.

Edit: Should add that I have no problem with anyone that did this deal.  I've stated a few times that I'm sorry I missed out on it.  I just don't like being called out like I'm doing such a horrible thing suggesting KSR return strategies when exploiting this glitch was just as bad on the moral compass that surrounds this forum (even though we are all here to basically exploit the system and get the best deals).

Congrats guys!  Seems like alot of people will be getting their games.  Maybe they didn't catch on till the end, and since WE can't even cancel our own placed orders maybe they can't either! Lol

Thanks for the response. Quick follow up question: the FAQ says that you get the 20% discount on the transaction you are buying GCU. Just to clarify, does that apply to the game you are using to get the $30 GCU, or only games in addition to it?

E.g. Pay $60 for Dragon Age (full price), but $48 for Assassin's Creed Unity and $48 for Call of Duty Advanced Warfare (20% discount) in the same transaction. Or does the 20% apply to the entire purchase, including the game that is allowing the discounted GCU price, which in this example is Dragon Age.

I imagine right when you buy it they give you the discount.  Seems only fair.  Why wait until your next purchase,  You're buying a game with the GCU