Wow this is fantastic Value..... A real Cyber Monday Deal im finding this insanity hard to comprehend...  Hey Bestbuy look at this !!

I have been selling for years and this is just my latest example.  I think what happens is that someone is looking for a certain item and that's all they see or choose to see or read.  In the case of my God Of War ad, the person in question is likely looking for a PS4, sees my ad, sees the words Playstation 4 or PS4 and their brain just assumes it's a PS4 console.  They see God of War but likely think it just comes with the console. Even though an actual PS4 system is not shown and no words in the ad refer to an entire console, their brain assumes it's the item they are looking for.  What astonishes me is that they actually believe someone would sell a brand new PS4 and a game for only $100.  I don't know which one is sadder.  The fact they can't read properly or the fact they think they can buy a brand new PS4 and a game at that price.

My other ads state what items I am looking for in a trade if the person doesn't have cash and A LOT of people respond to my ad wanting to buy the items I listed as the ones I want to trade for.  I make it very clear that I am looking for TRADE for the following items yet people just choose to gloss over that because again, their brain just sees an item they are interested in and makes an assumption despite the words that follow before or after.

I've been a seller for years (as you can see by the link in my signature).  I have the same problem all the time, people failing to read, sometimes entirely.

Most recently for me, eBay selling the Joy Cons that came out of the mario party bundle.  Shows Joy cons, title says joy cons L/R.   Says in the description these were pulled from a mario party bundle, and are the controller only.  Images do not show mario party at all.

Guy messages me.  Where is the game it was suppose to come with?

I have been Elite Plus for years.  I use 45 day returns for price matching and the bonus points give me a ton of crap.

I do wish they treated Elite Plus members better then normal plebs.  I am not happy they got rid of the Elite Plus support lines.

Both of the SKUs you posted are the same number

Sadly all of mine are normal price, but good luck you all finding something awesome.

But really, after that whole poster thing blew up, this has got to be fake.

For new or used?

Shoprite is a grocery store chain in the North East.  I have to say I am slightly tempted but I am going to pass.

New.  Just search it and look.

Was 99 one microsoftstore.com recently with 5 dollars shipping.

Man! I got an awesome deal.

So! Last week they had up a sale where you buy $20 PSN card and Bloodborne you get 15 dollars off.  So, since that had no expiration date and they were still up I bought 2 copies of Bloodborne and 2 $20 PSN cards for 104 (after Tax).  (saved 60 dollars total)

YMMV but entirely worth it.

Means I get to play this with the wife and we get to buy the DBZ DLC for next to nothing! 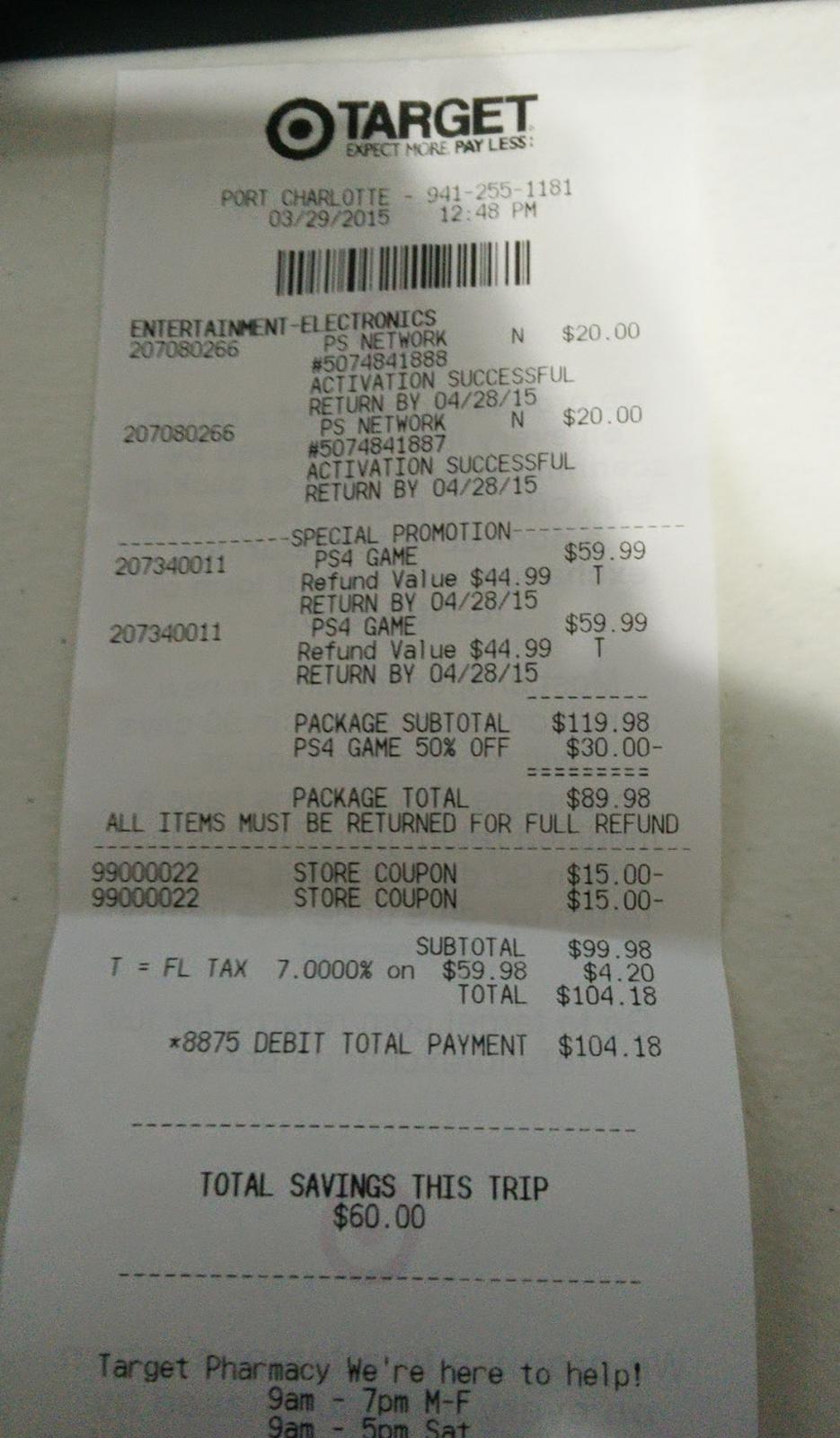 It's got a bad rep but I still want to try it and that price is really nice. Too bad that not a single store near me has it.

It's really cheap on amazon.

did you go into BB for it or call their customer service?

Reason I ask is because I called their customer service a few weeks ago to price match Castlevania LOS2 and Rayman Legends, and the people in their customer service were terrible. Slow and apathetic as hell, and tried to convince me since it wasn't in stock they couldn't price match. They only did it when I pointed it out to them that it was in stock within 5 miles... =/

You may use their customer service OR you can go to the normal lines.  They do price matches at both.

Being friendly, wishing them happy holidays, asking about how their christmas was, all of those things are also recommended ideas.  Caring about them goes a long way.

Thank you Sir.  Good advice for MANY people.

Clearly he is joking.

Have them price match Kmart and you get This.

ToysRus right now is runing a deal where if you buy either of these games they give you the guide free.  Get them to then pricematch Kmart and you get the game and the guide for the prices in the title. 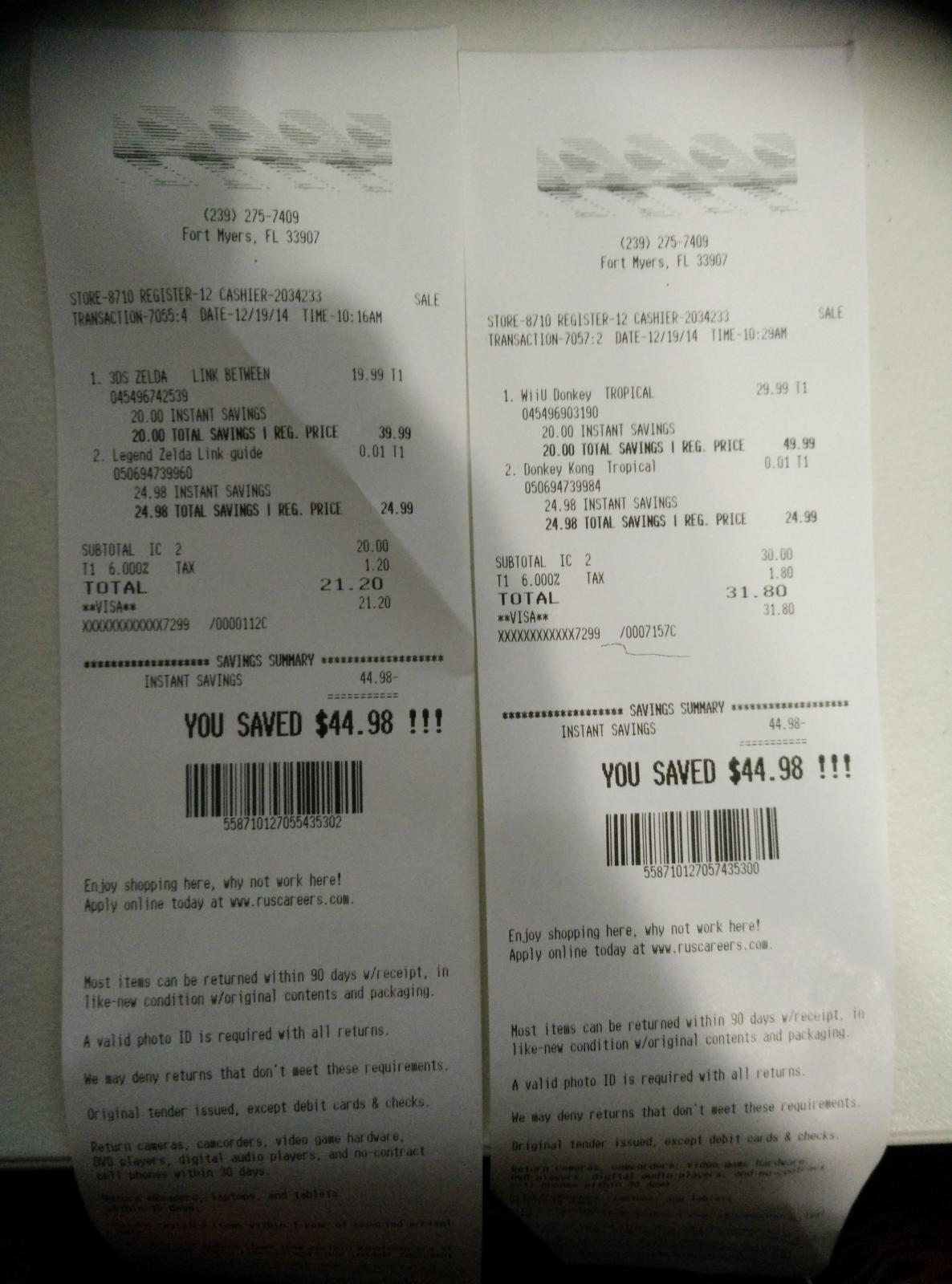