Is there a link to preorder that version somewhere? All I see on PA are JP and EU versions.

PS4 link is Asia, but it's confusing because the "preliminary picture" (placeholder) they have up has French on it.

I got my ESRB Epic Mickey and German Invizimals out to look at that listing closer. Not saying I dont think there is a chance this is fake, but the spine code is consistent with Epic Mickey PCSA-xxxx as is the website latinam.playstation There are a few sellers all in Chile. I agree that label looks sketchy but it could have also worn like that in a pocket. The look and feel of the cover matches North America rounded edges for the info box vs. square box running end to end on Euro boxes. I dont know, I am not so fast to write this off. That is not just the Spanish cover with ESRB replacing PEGI. This would be major attention to detail if it is fake.

Granted I haven't been around since the beginning, but I've been frequenting collector's forums for 5/6 of the years I've owned the Vita. I also have a full NA set (including Meat Boy but not the Nicalis releases), EU/R3 exclusive set, and a few handfuls of import-friendly JP games. I even moderate the Vita subreddit.

To my eye, this is 100% fake. The Vita's definitely a collector's console and this type of thing would've been called out as an oddity well before now if it was legit (like the Vita case for the PSP Resistance game, the English cover of Handball, ESRB Epic Mickey, etc.). If someone wants to spend $300 on a label/boxart some dude in Chile is printing every few months that's their business I guess, but I can only imagine that supporting them will lead to "new rare ESRB variants" being "found" in the future.

Sorry to interupt the Switch discussion, but I just found out there was an ESRB version of Invizimals similar to the Epic Mickey release, Latin America only. Not sure how widely known this is, anyone know what the details are? Bundle?, regular release?, not really finding anything on the net outside of a few solds on pricecharting.

I don't think it's legit. I've been collecting for the console for ~6 years and I've never seen them mentioned or listed until the past year or so. The same guys on eBay seems to list one every few months. They're never new/sealed, the cartridge label format doesn't match any other formats (including Epic Mickey).

If you look at the images of the one listing on eBay, you can even see what appears to be them sticking a "new" label over an existing label on the cart: 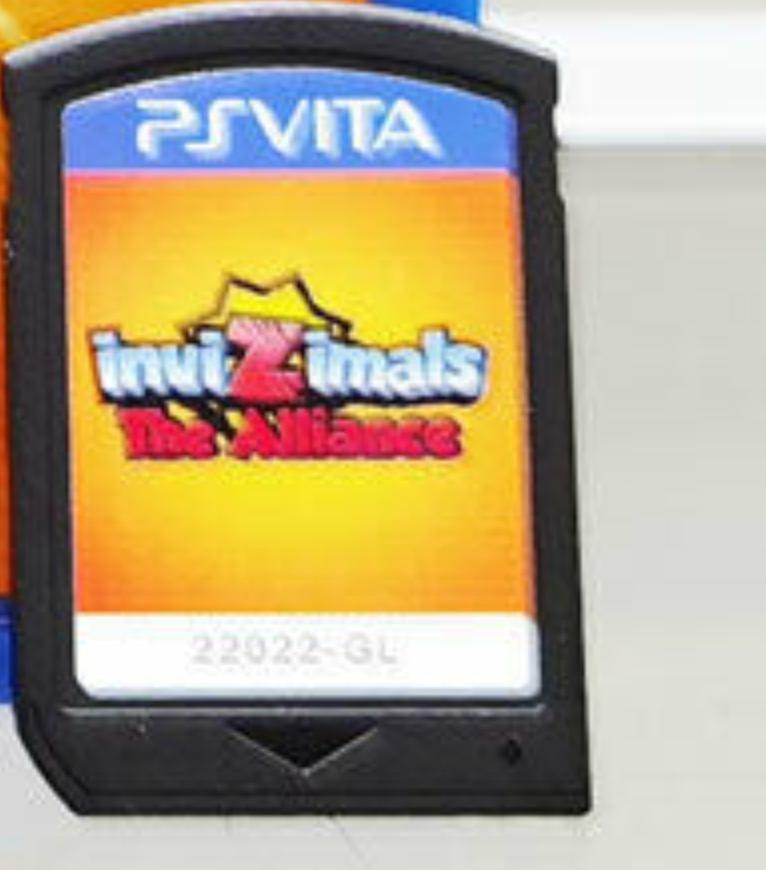 So yeah, 99% chance it's just someone printing new art/labels for other versions of the game to capitalize on the collector's market.

I’ll be shamelessly bumping my own question now, don’t mind me.

Or do, actually, please and thank you.

Since I prefer physical games I can't really say I've paid enough attention to trends to answer your question, but you can use PSPrices to check for discounts over time. Here's the page for Disaster Report, for example: https://psprices.com...summer-memories

There was a ton of discussion on their Discord about notifications not going out as soon as people started receiving shipments out of the blue.  They were made aware of the problem right away, but it took them a while to fix for some reason.

They still don't seem to be fixed across the board. Folks were still posting about not getting notifications today. I got a package on Monday with no shipping notification.

I have a feeling Brotherhood United is getting a physical release with Play Asia so I'm going to wait a bit before I buy it digital. I know the other three games are not getting a physical because they barely made it for submission deadline for digital releases.

It's been fun PS Vita. I still have lots of game to play and trophies to earn in the huge backlog but definitely my favorite handheld.

I agree. The Vita has been a great handheld and will be for years to come with my backlog. It's a shame Sony threw in the towel so early.

But, that said, the collector in me is actually kinda relieved for these releases to be coming to an end. It feels like the latter years of the Vita's physical releases have been primarily oriented at exploiting collectors beyond some gems like Unmetal and Scourgebringer.

I read there’s speculation that the Nicalis games were just test prints and not full production orders. Not sure if that was even possible, as we’ve never heard of it from any other publisher or for any other titles. Seems like they would have had to order the minimum quantity regardless

Someone emailed their support last year and they said they still planned on releasing it but that they were getting LE goodies/merch together.

It could also just be that a misinformed intern was responding to the email for all we know, but I don't think it was just a test print.

$100M in revenue over the lifespan of the company doesn't mean or tell us much. What matters is how much they're paying devs to publish those games and then of course operating costs. Sure, I don't doubt LRG is doing well, but I wouldn't immediately jump to the conclusion that they're doing gangbusters.

You're really underestimating how much money $100M is.They're not running a warehouse out of San Francisco and paying 60 employees six-figures here. They're based in NC, where real estate (office/warehouse space) is comparably pretty affordable, and paying their non-executive employees "well" would likely be $15-$20/hr ($30k-$40k, probably $40k-$50k post employer-sponsored benefits).

I'm not trying to say that they're Amazon or that they should hire ten people every time ticket volume picks up, but at their scale a few new staff members aren't suddenly going to put them out of business or make them sell more to stay afloat unless they're miserably mismanaging their finances.

yea, i got that email

does nis hate money? just reprint all the titles that are selling at scalper prices on ebay

that survey link is just a generic link, right (feels like i can post it, not 100% positive)

MOQ for Switch is 5k and PS4 is 1.5k. It may not seem like a lot, but for a lot of smaller publishers it's a legitimate risk. If they can't sell through those quantities and end up sitting on inventory they could lose money. There's also the cyclical nature of people wanting things "because they're rare", thus making them more rare and driving the price up so legitimate demand is hard to quantify.

Even though I already have the games they're asking about, I'm glad they're doing this. A lot of these games are in the $100+ range and it's a little absurd. Fingers crossed my CAG peeps are able to get what they want reprinted.

Been noticing that on desk number going higher and higher... can't wait to see what they blame the shipping delay excuses on this time.

I still remember them trying to pass off COVID as the reason everything was backed up last Spring. Ironically, then the backlog was half of what it is now. As annoying as it was to scrape their site, I'm glad I made the update posts I used to in here to visualize the point.

I agree, it is funny. But that's usually what businesses do if they are too overwhelmed. They need to either expand by hiring more people or whatever or cut back. I am just wondering what their reasoning is here.

This post says it better than I can, and I will always refer back to it: https://www.reddit.c...incompetent_or/

Does PA bust your balls for canceling pre-orders? I don't think I've ever pre-ordered anything from them so I have no idea how those work here.

I just don't wanna get into another Amiami situation.

No. They'll ask for a reason, but I've told them things like "I no longer want this" or "A US version was announced and I'd rather have that" and they didn't give me trouble. There's a little bit of a language barrier and they'll generally ask if you're okay with a wallet refund (read as: store credit) first, but they're not going to ban you or anything like AmiAmi.

There are specific items on their store that say "must be paid immediately and can't be cancelled". I've never tried to cancel one of those and I imagine they'd give you more grief there.

I see US versions listed on Play-Asia for Fatal Frame Maiden of Blackwater (Switch, PS4, Xbox). Are those new?

Listings have been up for a while but hadn't been purchasable.

For people asking about what to order, I'm probably not saying anything that wasn't already recommended but these were my purchases:

Will likely add Maiden of Black Water to that list if a listing doesn't pop up on Amazon or BestBuy by the end of the month.

Anyone else getting the PS5 version of Tales of Arise collecters?

Yep. Tales is my favorite JRPG series. A little pricey for what it is, but Tales is one of a few series I'm willing to splurge on.

LRG is releasing Risky's Revenge for a third time and another company is releasing a physical version of Among Us after LRG released their CE with no physical game.

It's starting to feel a whole lot like when GameStop made half of their stores ThinkGeek merch that nobody wanted.

God damn, Shantae is prob like a free money scheme for LRG... I bought tons of Shantae stuff from them, but this is insane. I do want that CE though, that SB looks pretty cool.

They're selling each of the Shantae games 2-3 times (Switch, PS4, PS5), it's a pretty blatant cashgrab in my eyes.Especially the "reprint loophole" they're carving for themselves with the PS5 versions. I expect the Xbox and eventual Switch 2 to get ports and physicals for each title too at this point. The IP just prints money for them (and Wayforward).

Glad for those that wanted the games and missed out on the previous versions, but I have no desire to buy the same game from them multiple times, especially when my PS4 disc works perfectly fine in a PS5. And LRG's CEs are, as usual, comically overpriced.

Clarification from Josh on the coin criteria:

Given how simple this should've been, I can't wait to see what a shitshow the full set Vita game will be.