What’s the verdict on Luigi Manson? Must have or ehhhhhh

Ive always said, Frisky IS the only reason I come to this site. No one else does what he does, not even close.

Plus, most of you guys are alright, too - ugh - I guess lol jk.....seriously Frisky IS the only reason CAG is still worth a visit (sorry to all the other xbox and ps4 guys, but nothin like Frisky exists for them, nor should he, he’s representative of what a REAL Nintendo/video game fan is, and beyond that , Frisky IS the MOST DEDICATED CAG on this site.

Now, with all that ass kissing finished, what do you guys think of Luigi’s Manson? Must have, or semi good, or wait for Black Friday sale ?? (I paid $50 for it but I can return it)

Dont cry for me Argentina! Dont you know, i will never let you go!

I encourage EVERYONE to get katamari damacy

its better than the original

Hey not trying to start a thing but can we not have these endless discussions on the Argentina eShop again?

Someone open a thread in the Switch topic and then you guys can go into crazy detail.

Finally, I’m not the bad guy for once.....exactly

This new Zelda is incredibly good
Def must have
Thanks echo

Yeah, leave Frisky alone, hes got his system, and hes been doing his thing for years now. Unless he wants/asks us, then let him live bro......

FRISKY IS THE GATEWAY TO NINTENDO BLISS, dont f### wit it!

*(lol jk....seriously if frisky needs help, please dude, let us know what we can do)

Honestly dude neither did i, only got this game FOR the physical elements, its really fun. Now I basically got the game free from amazon so spending $15 for 8 weapons/4 weapon packs is not only not a big deal, but its reasonable too because these toys are hot-wired for plug and play and they also light up with LEDs and stuff

Its actually quite fun to be able to switch your weapons on the fly in the middle of new battle opponents because some opponents are resistant to a certain attack or weapon, so switching is the only choice and who the hell likes going through menus honestly, epsecaplly with all the choices and configurations with STARLINK, so the toys make it kind of quick easy and the real world elements is obviously a blast

I dont play STARLINK too often, butnow that i have these i definitely will be playing it more, because i enjoyed just going around playing with different configurations, and each weapon is vastly different than the others (although there are four main types: fire, ice, shockwave, electric) so besides laser guns and metal guns, there are a lot of choices and I’m sure the more you play this game the more weapons you need

Luckily, all I want is the R Wing and starfox McFlurry (is this their names??lol hahah, i was about to call him Kit Cloudkicker, but thats someone else entirely, i think....) 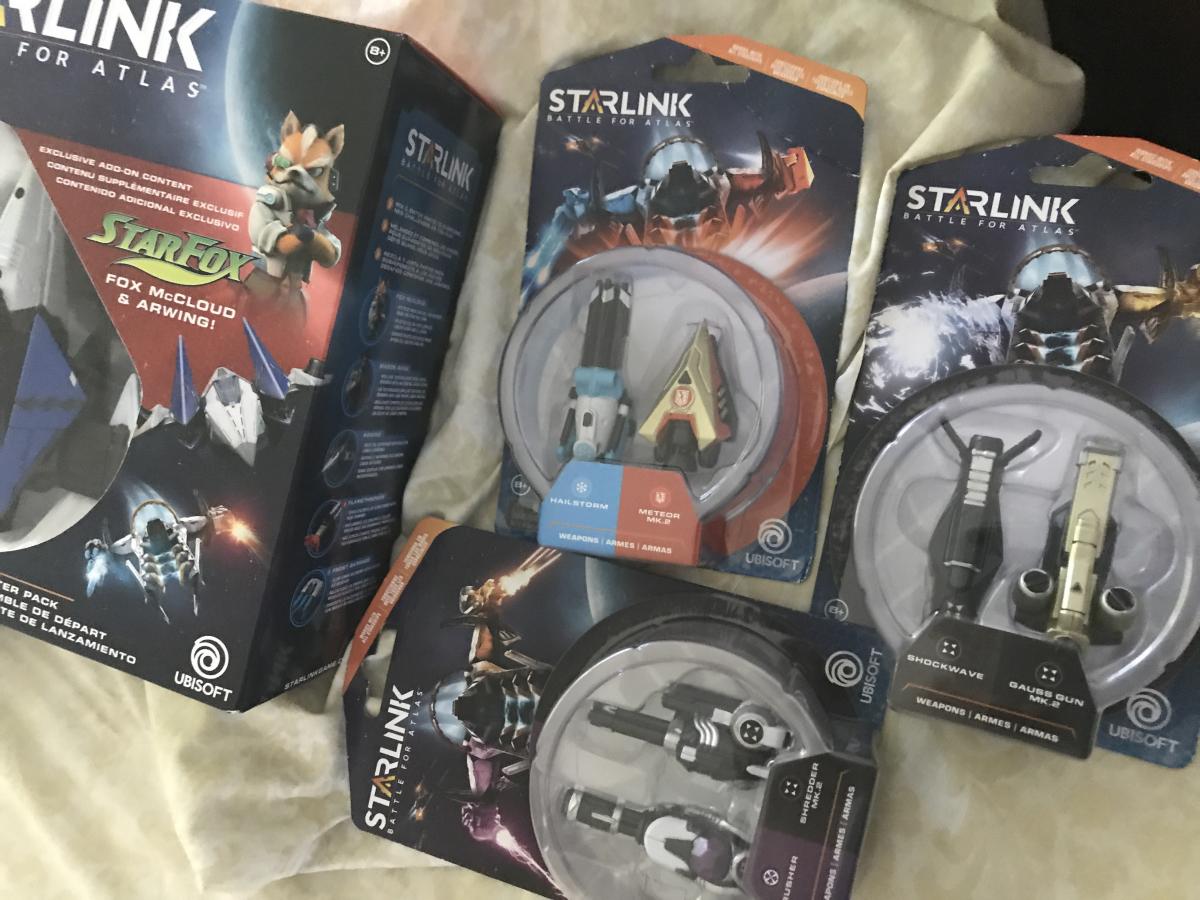 Its more effective but not as fun
HAVE YOU TRIED THE STARFOX SHIP , what’s it called the X wing or something
Like its so fun to throw him in and put on the weapons and then when i want, i switch the weapon
But i got a little starfox and a ship and its super fun to play with the toys
And i dont give a shit if i sound like a child, because its childish to play video games past the age of 22 anyway....(jk)

Honestly, I don't make a lot of money because I work in education. But I'm a smart shopper. And I try to share the information that I gather about discounts with everyone here because it's the right thing to do. And I like to make a meta-game out of saving money buying games. But, yeah, I've acquired a good collection in the past 33 years. So, honestly, I need to buy a Switch like I need a hole in my head.

you sound like myself yikes!!! When i read your posts, i honestly sometimes double check to see if it was me who posted lol

Wow, what about those bigger epic games like BOTW or MArio Odyssey, dont you guys like to see it big? Or like Super smash bros , dont you wanna use the Pro controller?

IDK man i love my switch in TV mode and tabletop mode, where I use the controller wirelessly.....but i guess maybe I’m in the minority

Jose, your a true cag, cuz If ur broke You also have the best game collection off the top of my head from any other member i can think of, unless your posts are inquiries and not buys lol

I think you have the BEST posts Jose

BTW I asked because I RARELY use the portable mode, its either desktop/tabletop or TV mode.....i didn’t know people exclusively play hand held switch , I thought from some games its like almost impossible, but i guess not