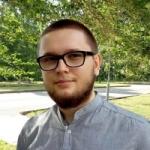 elcoldtown hasn't added any friends yet.

I recently discovered the subreddit with an interesting idea — to challenge yourself with playing 12 games in 12 months. I started that and beat Oxenfree in January. Here's the full list: