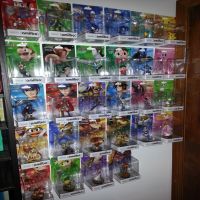 Last night I was playing Astro Bot Rescue Mission on my PSVR, but I was having a lot of input/controller problems- at times the controller was completely unresponsive, other times it’s movement and my button presses registered several seconds late. None of these problems were happening the previous couple nights I played the game, and I didn’t change my setup before playing last night. I’ve never had this issue when playing PSVR before, but this is the first PSVR game I’ve played on my PS5.

I tried Ultrawings for the first time last night and it was very jerky - even the laptop desk (menu) was more or less vibrating. I quit the game, recalibrated everything and it was a lot better but not perfect. Wish I could be of more help. I last played Superhot all the way through and had zero issues prior.

For something like this, I can abide by it even if it's not for donation. I bought 30 cheapo bars of soap for 3 cents a pop at a supermarket closing almost 10 years ago. I'm still using it to this day. If it's going to be used, not wasted and not weakly resold, something like this is ok.

I don't agree that there is any benefit to repeatedly posting the same complaints year after year on a thread that LRG doesn't even interact with in any way.  Again, what value is there to LRG constantly updating when something might ship?

It's called venting. That's the value to us and it's probably better that it's on a thread they don't check. If you don't like it, find another place to post about LRG in that meets your standards. You won't find it... because you're in the minority.

Oh, bojay. I'd say never change but you haven't in 20 years so there's that. This is how he's always been. He's an entertainment attorney so he's programmed to be argumentative for splash. He is most definitely not Josh or Dougie. Ignore him and carry on with your regularly scheduled conversation.

Speaking of which, so much for the Xmas present... I mean Valentine's Day... I mean, now birthday present in the form of the SC5 bundle for the Mrs. The sad part is I ordered it on August 1st and figured it would take 4 months to arrive and it didn't even meet that. An update from LRG would be useful so I would know how to plan gift buying, but, it doesn't benefit LRG, so why do it, right bojay?

I love seeing CAGs unite over how shitty LRG is nowadays.

It's amazing how these two twits lit the goodwill they had on fire. I am savoring it... and only buying their games from Best Buy or secondhand on eBay for minimal markup, and skipping the rest.

I don't know how the LRG induced FOMO didn't combust when they hit 100 releases.

Literally no chance of finding this TV in store. Definitely a trap clearance.

I'm still trying to figure out how people are still lining up to give these people money. They have only been successful because their customers make worse decisions than they do. For all the money flowing, I can't comprehend how they can be so abysmal with getting orders out. I was very happy to buy Accounting+ on sale at BBY because it was lower than they ever charged.

I miss loading up this thread to find deals. This is getting way too out of hand.

Can we get a clearance on the receipt checker argument? I don't think it's even worth 3 cents.

I get that too, but I think the fear with LRG is that they're leaning too far in that direction and potentially ignoring better and/or worthwhile releases.

At this point, I am pretty sure they don't even play the game they want to target for release beforehand and just look at what the box art would be and go from there.

Did a search in this thread and didn't turn up any results, apologies if this one has been posted, but I went to buy

It's because those Amazon orders are not real. That was readily apparent when someone on Neogaf ordered 99.

Speaking of which, does anyone know how to set an Amazon page to Amazon.com as the seller if they're out of stock and there are many third-party sellers? I am preparing for Amazon to possibly list their actual stock at 1:30 pm est like they do with their exclusive amiibos.

It's possible that the question was intended as rhetorical.  However, even if resellers were removed from the equation, I'm not sure that there would still be sufficient supply to meet the perceived demand.  Of course, if resellers were gone, there's a good chance that Nintendo's sales estimates and production would be altered in some way, thereby having an effect on the total supply.

Actually, reselling items that you legally bought as an individual (not a corporation or business) is perfectly legal in the USA.  Its gets sticky if someone is turning this into a business venture, not an isolated case of "I'm selling my one item."  There are tax and warranty implications that may need to be considered when dealing with an electronic device (such as a SNES Classic), but nothing that can't be overcome with careful consideration.

Make no mistake, I have no intention to encourage, enable, or advocate the practice of reselling through any of my discussions.  I'm being practical and analyzing the situation for what it is: a legal reality.

From your perspective, reselling will most certainly make it more challenging for you to secure a preorder, and likely the final product at release.  However, that distinction is only valid in the short term - over time, either the resellers will find another purchaser (at an inflated price) or the product will be returned to retail channels.

Remember - nobody is entitled to anything.  Just because a good of trade is provided by the manufacturer does not give you (or anyone) the right to purchase it.  Availability can and always will be an issue...for anything of sale.  It's been said many times before: the best way to combat reselling (if it gets under your skin) is to not support it.  Its existence is fueled by enablers.

It's pretty clear you know that the response you know to be true is going to funnel you into finally being proven wrong in the original question, that being:

I would wager hard cash that if you completely removed the reselling aspect of the demand, there would be just enough systems to fulfill the demand from those wanting to keep the damn thing.

So you drown your post in deflection (no one believes you really thought I wasn't being hypothetical) so no one notices you gave the answer to my question (bolded above).

So, yes, it would get easier to secure a preorder and the gap between those who want one and who would get them would decrease. My wager is it could completely close and there could be a chance of that.

You aren't an economist; you are a politician.

That's exactly my point. Resellers do not add to the demand, they defer it.

No, they double it. Once for the reseller, again for the person who buys it from them. I am saying demand, you are saying sales. The reseller and the their eventual buyer both want the item from the retailer, which is twice the demand (but for different reasons). The reseller defers the sale.

I think we are both in agreement but either myself or you are not using the right language to describe our points.

There is no way Amazon would allow ordering as many as people have. The CSRs people have talked to know nothing about item listings and cannot be trusted. They are nowhere near the actual Amazon supply chain - quite literally since it's probably outsourced halfway around the world. Just because it said stocked by Amazon doesn't mean anything.The Game Trust line should have had everyone's bullshit sensors going off like crazy (and even moreso now that the listing has been deleted).

And so this doesn't seem like a sour grapes post, I do have a preorder from Target. I don't think the Amazon listing was real. Two reasons:

1. Amazon limits their exclusive amiibos to one per person and releases them on the day of release. While this isn't amiibo, why would they use a different tactic on something so limited?

2. Amazon CSRs don't know anything about any one specific product. It's like talking to someone who doesn't know your language and all they know how to say is 'Yes' or 'Uh huh'.