sparklepuss hasn't added any friends yet.

SAVE BIG and treat yourself (or a friend) to 50% OFF a print + digital subscription to RETRO using code BlackFriday! 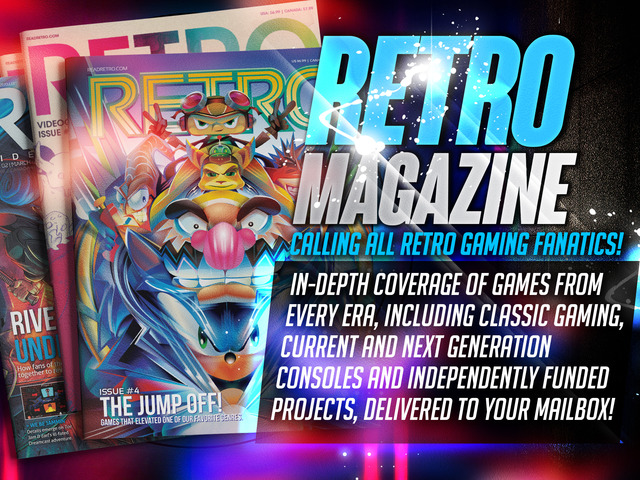 RETRO magazine is running a year 2 kickstarter  HERE so they can expand their page count.

Got some really good deals on subscriptions.

Register for your hotel here and then fill out this short webform; http://cgexpo.com/discounts.php  Put Cheap Ass Gamer in the where did you hear about us line.  They will send a pay-pal invoice for $25 for the pass weekend pass.

The Classic Gaming Expo (CGE) is back September 12-14, 2014 at the Riviera
Hotel and Casino Convention Center to continue the CGE tradition of
excellence. The original retro gaming expo, 15 years in the running,
represents the best games from the birth of the industry through today's
latest retro themed products.

The arcade selection has also expanded greatly this year to include over
100 arcade and pinball machines in the CGE Arcade and the Pinball Hall of
Fame annex at the Riviera. The console section will feature 50 consoles
covering the history of video games as well as a huge selection of LCD and
LED classics for play, which are seldom seen at expos!

In between the shopping and gaming be sure to check out the movies and
panels that CGE is famous for. We will be screening movies, which will, in
most cases, be followed by a Q&A session with the filmmaker! Attend
screenings of classics and new films such as; Video Craze, Gameplay, Once
Upon Atari, King of Arcades, Gamer Age, and a sneak preview of footage
from the upcoming The NES Club. When the movies are not rolling, the rooms
will be filled with attendees listening to panels and presentations from the video game
industry alumni that CGE is famous for! Rock out with bands such as 8 Bit
Weapon, The Brisitsh IBM, Compute Her, Evilwezil, and prepare yourself for
the comedy of Keith Apicary.

If you are a fan of cosplay be sure to bring your best for the cosplay
events at CGE! This year will feature a cosplay contest with prizes,
including the grand prize of $250. Registration is now open on the CGE
website http://cgexpo.com/cosplay.php

More information on the events can be found at http://cgexpo.com/

Get RETRO magazine subscription for $25

RETRO is running a deal until next Sunday. Go to http://readretro.com/subscribe/ and use code "LONGLIVERETRO" and get a print + digital sub for $25. Cover price is $42, so this is a pretty awesome deal. They completely sold out of issue #1, and issue #2 is about sold out. It looks great on my shelf

RETRO magazine 40% off cover price today only use code "iheartretro"

This weekend only, subscribe using the code “iheartretro” & get 40% off cover price: http://bit.ly/buyretro