Amazon has some real good surprise Deals every now and then. These events however, always seem to under deliver.

Yes you are right, they had a slammin deal the other day on hammocks and lantern refills.. also preparing for disappointment

Side note. Cancelled a preorder from Microsoft store for GOW 4 and they sent me pre order codes anyway , double bonus

GCU will no longer stack on BF deals anyways

Knowing BB's systems they will be broken and you will be able to get it, if not ask cashiers they will do it for you

So I traded in black ops 3 at lunch and they gave me a $33 gift card and the coupon as well.  I'm assuming they did something wrong?

I traded in Blops3 last night and got 30 for game and coupon as well.. So I assume that's what it is, so it is even better than the deal they say there doing

Puts 2 schillings in your cup for your next bottle

Your situation is so YMMV. Consider yourself super lucky for having incompetent employees at BB.

Tes I know and trying to take full advantage of it.. Maybe it helps that I'm in there all the time and am elite

anyone know if the option to print the coupon occurs at the beginning- or the end of the trade process?

If it happens it happens at the end of the transaction but you know it isn't going to work if your not getting $20.00 upfront for the game

I did another trade today at a different store and did not get a coupon again.  Getting the coupon seems to be YMMV

Here is what has been happening to me. I had 2 copies of Black ops 2 so I took one to BB for the trade in special. After the trade transaction had ended they had given $27.xx in a gift card. I politely asked for the $10.00 off coupon and they had no knowledge of it, I showed them the ad from this CAG and they agreed I should of gotten it.  I also noticed they had given me only 14 for the game instead of the $20.00 base trade in value. Employee asked a manager to assist and he had no idea on how to fix the issue. so he said "instead of trying to figure this out I am going to give you another $30.00 GC will that work?" I said sure, and gave him back my original GC received for the trade in, and he responded " no you can keep that one as well."  So I walked in with BOP3 and  walked out with $57.xx in credit $9.00 more than i paid for it so defiantly worked in my favor.

** Update Took another copy I had and a similar situation was given the wrong amount for trade again ( the $27.xx like the first time) so I mentioned the deal with coupon again she couldn't get it to work, she asked for manager and got another $20 put on top on my $27.xx walking out this time with $47.00 in credit. So it has worked in my Favor both times.  may try it again today with a friends copy.

Agreed, there's a million threads on here and often hard to find what you want to post about unless you search lines and pages of text to possibly find. Master threads agree should be banished

I'm a kidrobot retailer and it makes me sad when people buy pops lol.

Can u give us the hook ups??

I bought a couple and ended up with a Ryu and Chun-Li. They are pretty cool, but Kid Robot is just too expensive, which is why Funko owns the market for these collectibles.

I agree my good buddy!  I love kidrobot, I would think by the size difference that same amount of plastic would be used in the process of making them. But 15$ for something so small is hard to swallow - let gay jokes begin

You don't want to know how much money I spent on getting EVERY SINGLE CHARACTER of the SF KidRobot... the Glow-In-The-Dark Blanka ALONE cost me $180

I tried collecting the first series of street fighter figures from kid robot... Drove to the kid robot store in San Francisco, bought two blind boxes for $20 and ended up with two kens. That was the end of my kid robot collection until i found them at five below... Ended up with a third ken lol

LOL that is hilarious!!  that is my main issue they are so expensive!

Do we really need a thread for funko figures? Jesus it isnt as if these things arent always everywhere.

And no, they didnt sell out at all. They are all still on amazon. They will never be sold out, we will eternally be damned to having these things always sitting on store shelves. Although I will admit I do own one, lo pan.

Might as well just start posting things for every single video game related toy, figure, t-shirt, keychain, etc that is less than its MSRP.

I agree FPs will always be around but we don't have a lot of street fighter things around outside of the ryu statue that came with the special edition. I agree they make to many for a lot of stupid crap but come on cant hate on Street fighter 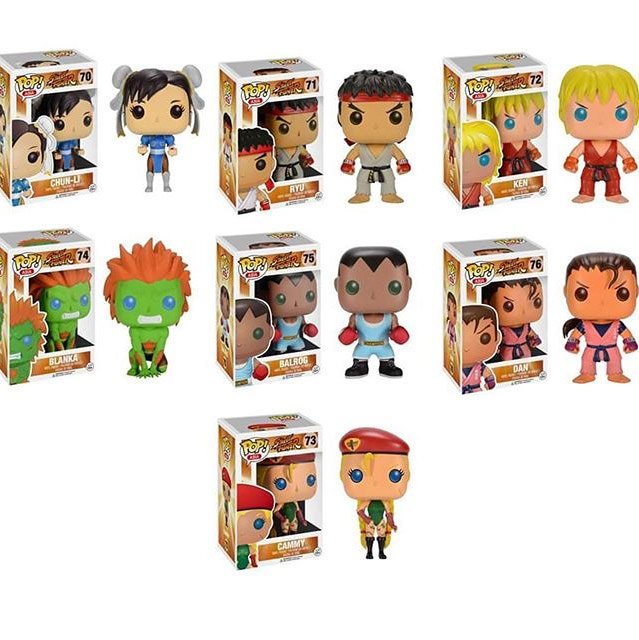 I saw these where announced at Comic Con and are now are up for preorder. From what I understand they sold out in this first hour after  they were announced. I ordered all eight don’t tell my wife LOL

Here is the article I was reading... Enjoy friends